Embed this infographic on your site!

The US military has killed, maimed and made homeless well over 20,000,000 people since the Vietnam War.

Enough dead bodies to line up, head placed to feet, around the perimeter of Louisiana.[2]

Meanwhile all of New York City, and Chicago are refugeed.

And 317 elementary schools are filled with children deformed from Agent Orange, unexploded cluster bombs, and landmines.

Our nation admits these are war crimes of the highest degree.[1]John Kerry, Secretary of State: “[the Vietnam War] was contrary to the laws of the Geneva Convention, and ordered as established policies from the top down.” “The men who ordered this are war criminals.”

Fourth Geneva Convention:[5] Article three: Applies to (1)”persons taking no active part in the hostilities.” And prohibits (a)”violence to life and person, in particular murder of all kinds.” As well as (d) “the passing of sentences and the carrying out of executions without previous judgement pronounced by a regularly constituted court.”

But it doesn’t stop there. Bombing runs continued for nine years in Laos, and six years in Cambodia.

Almost 2 million tons of bombs were dropped on Laos. That’s 2/3 of a ton for every man, woman, and child in the country. [11]

Killed at time of bombing:[1]

Deputy Chief of Mission Monteagle, Stearns: “Well, we had all those planes sitting around and couldn’t just let them stay there with nothing to do.”

U.S. Senate Subcomittee on refugees, 1970: “The United States has undertaken a large-scale air war over Laos to destroy the physical and social infrastructure in Pathet Lao held areas. Throughout all this there has been a policy of secrecy. The bombing has taken and is taking a heavy toll among civilians.”

With covert operations following throughout the cold war

Responsibilities of an occupying power according to Hague Article 43: “the authority of the legitimate power having in fact passed into the hands of the occupant, the latter shall take all the measures in his power to ensure … public order and safety.” [1]

This means: deaths due to disease, malnutrition, exposure, lack of medical care, and crime due to the invasion are on the hands of the U.S.

Drone strikes are a matter of invading sovereign nations, attacking American citizens without due process of law, and an overwhelming number of dead innocents.

Very few countries have violated as many humanitarian laws and codes of war on such a large scale, and for such an extended period. The vast political leverage of the United States, the rising indifference of media coverage, and the alleged need of secrecy for matters of national security have largely enabled one of the bloodiest 50 years in human history. 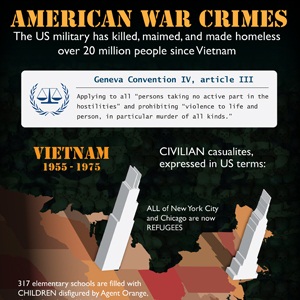