ASSAD TELLS THE KIKES TO BACK OFF OR GET BTFO

For the last few years the evil kike regime in Israel has been indiscriminately bombing Syria to protect their proxy army known as ISIS.  Thanks primarily to the Russian air-force, ISIS failed to overthrow the Syrian government for the Jews, but Israel is still continuing to bomb Syria and President Assad has finally had enough of this Jewish terrorism. It’s about goddamn time President Assad put these terrorist kikes on notice!

Syrian President Bashar al-Assad today sent a threat to Israel through Russian President Vladimir Putin, saying that if Israel attacked targets in the country again, Syria would respond by firing Scud missiles at Ben-Gurion Airport.”Syrian honor is above all else,” Assad told Putin, who replied that he would convey the message to Israel.

About three weeks ago, the Syrian army announced that Israel had carried out a series of attacks on an Assad army base in the eastern Kalmon Mountains, north of Damascus, confirming reports by media outlets close to the regime and as reported by Mako news.According to the army’s announcement, Israel carried out three attacks with fighter jets and missiles. “The air defense forces opened fire at the sources of the fire and hit aircraft,” the statement said. In Israel no confirmation was forthcoming regarding the damaging of aircraft.

According to the official Syrian report, the series of attacks began at 2:40 am when planes fired missiles from Lebanon’s airspace towards the Al-Katifa area. Then, at 3:40 am, another attack was carried out using surface-to-surface missiles launched from the Golan Heights. At 4:15 a third attack was carried out by four missiles fired from the Tiberias area. The Syrian army also claims that in response, its air defense forces opened fire at the aircraft and the missiles, and succeeded in intercepting or destroying some of them. 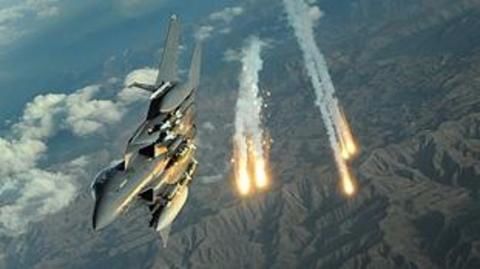 Syria repeatedly warns of the dangerous consequences of Israel’s attacks and promises to continue fighting the rebel groups, which are called “Israel’s terrorist affiliates”. Media outlets belonging to the Syrian opposition and rebels reported that the targets of the attack were ammunition depots in which long-range missiles were stored. The Syrian Center for Human Rights said that weapons warehouses belonging to Hezbollah and the Syrian army were damaged in the attack and that there was a fire and damage to the buildings. It also said that no injuries were reported as a result of the attacks.

Syria’s state television reported that local anti-aircraft forces had intercepted three missiles fired by Israel while they were still in the air: “Air defense forces were hit by an Israeli missile attack,” the official SANA news agency reported, “The target was a military site in the suburbs of Damascus.” Other media outlets in the country reported that Israeli aircraft were shot at.

Please President Assad pleassse give these filthy parasites a taste of their own medicine!!

Endnote – So if the evil Israeli regime attacks Syria again, and most likely they will, and Assad holds true to his promise of retaliation by bombing Ben-Gurion aiport, the million dollar question is will Trump declare war on Syria for the Jews thus starting a global war with Russia? We shall see…Buckle up goyim, it’s going to be one helluva year.

There is no Muslim threat to Israel expansionist plans (Greater Israel) other than Iran, Syria and Hezbollah. But let’s talk about Hezbollah. It is the Lebanese milicia running Lebanon policies since few decades and they have today the president who is Christian and the large majority of Lebanese standing with Hezbollah.

Hezbollah military power is considered the 4th in the world if we talk about the skills and abilities of soldiers, sure not on their number or equipment, but their skills in fighting. Here is Israeli official confessing: Hezbollah militarily stronger than most countries https://www.youtube.com/watch?v=dF14JgzJN8w

They are highly trained, but also Jihadists, it means they are not afraid to die, but even happy to die fighting the oppression of the Jews. They believe that dying as martyr grants them a ticket straight to heaven. In fact, I would even say they are the first in the world because they combine the skills of fight, an average equipment and something that all other fighters don’t have which is the religious conviction and Martyr-hood. When Hezbollah fighters die, their families see them as alive in heaven and somehow lucky to go to heaven. Their mothers don’t hesitate sending their other sons to fight whether in Syria with ISIS or to fight the Israelis invaders.

In reality I have a great respect for these Lebanese people even I am against Islam, but I salute them for their Nationalism and their love of their nation and their land! I wish that European people have such Nationalism and such sens to sacrifice to defend their lands, their civilization, their culture from the JEWS and from the immigration-invasion-conquest of Muslims that is happening since 1970’s.

The leader of Hezbollah Hassan Nasrullah said a few years ago that if Israel dares to attack Lebanon as it did in 2006 and 2000, then thousands of missiles will rain on Israel and the first targets will be the Ben Gurion Airport and the large chemical plants in Israel. This will cause thousands of victims among the Israeli Jews. I really can’t do other than saluting the courage of that leader who is the only leader in the world who “has balls” to threaten the evil Jews like that!

On the other side I don’t accept the religion of Islam for many reasons,simply because it contradicts with my view of life based on Christian culture that shaped the Western culture since centuries. Islam is a totally different, and opposite civilization, incompatible with ours, and never will adapt but is brought by the Jews to remove Western culture based on freedoms that they hate too much. Jews hate Christianity for purely religious reasons, Jews deny that Jesus is the Christ or the Messiah, and are still waiting the “real one” till today. This is why the Jews Islamize Europe which is the center of Christendom. They tried for centuries to help Islam conquer Europe but they were always kicked out by force.

Muslims and Westerners should remain separated otherwise they will destroy each others. This why Jews Islamize Europe

ASSAD: “THE TERRORISTS ARE FIGHTING FOR ISRAEL”

PUTIN – NO REGIME CHANGE IN SYRIA