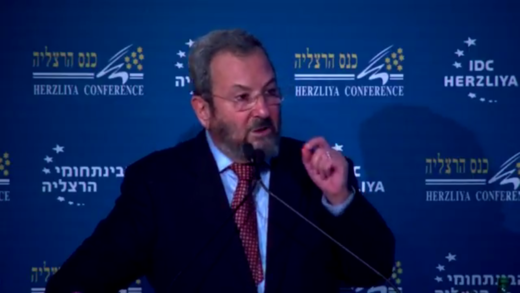 Trump’s “shithole countries” statement about Haiti, Africa and El Salvador has been heard across the globe. Media outlets were quick to note an earlier meeting where Trump said that Haitians “all have AIDS” and that people from Nigeria would never “go back to their huts” if they came to the United States.

It’s good that mainstream news organizations are calling out the pathology, that this is not dismissed as yet another slip of the tongue. But a very similar discourse and pathology, rightfully considered outrageous by many Americans, is rather mainstream in Israel.

Barak has depicted Israel’s situation as a “villa in the jungle”. This phrase has become iconic, and according to Haaretz chief editor Aluf Benn, is a sentiment shared by most Jewish Israelis. Think of it – the “villa in the jungle” notion combines both the “shithole countries” as well as the “Nigerian huts” notion. And Barak gets away with it. Indeed, Barak’s racist incitement against Palestinians is not a one-time slip-of-the-tongue. In an interview with Israeli historian Benny Morris in 2002 in The New York Review of Books, Barak said of Palestinians:

They are products of a culture in which to tell a lie…creates no dissonance. They don’t suffer from the problem of telling lies that exists in Judeo-Christian culture. Truth is seen as an irrelevant category. There is only that which serves your purpose and that which doesn’t. They see themselves as emissaries of a national movement for whom everything is permissible. There is no such thing as “the truth.”

Comment: “Truth is seen as an irrelevant category. There is only that which serves your purpose and that which doesn’t.” What an unsurprising and wholly pathological projection.

Shock horror! Do we see what Barak is doing here? He’s not only saying that all Palestinians are simply pathological liars, but that it’s because they are supposedly not part of the “Judeo-Christian culture.”

What if Trump said this? Well, indeed, Trump’s former adviser Steve Bannon did say such things, but many people recognized his statements as outrageous. Barak kept his respectable aura. And as for the man who interviewed him – Benny Morris – also a ‘leftist’ – said that Palestinians are like a “wild animal” that “has to be locked up in one way or another”, and that “something like a cage has to be built for them”. (Memo to Morris: something like that has in fact been built for them.)

Let’s not overlook the fact that Morris has actually congratulated America for its genocide, as it helped make ‘America great’:

“[E]ven the great American democracy could not have been created without the annihilation of the Indians”, he said.

Moving on to other Israeli examples, Communications Minister Ayoub Kara, Netanyahu’s Palestinian “puppet”‘, has recently called African refugees a “sanitary nuisance” (Friday). He also suggested a death sentence for supposed propagators of ‘fake news’. Seriously. He’s the one who also said about Al Jazeera in September that “If they wanted to open their mouths, they can do it at the dentist”.

And what about Defense Minister Avigdor Lieberman, who advocated the decapitation – with an axe – of Palestinians who are ‘disloyal’, and suggested that Palestinian prisoners be drowned in the Dead Sea. He also called Palestinian-Israeli Lawmaker Haneen Zoabi a “terrorist” for partaking in the Mavi Marmara freedom flotilla.

Lieberman’s predecessor, Moshe Yaalon, said that the Palestinian “threat” is like “cancer”, and that “at the moment,” as army Chief of Staff, he was “applying chemotherapy”.

And Yaalon is the “moderate”! He quit Likud last year because “extremist and dangerous forces have taken over Israel and the Likud movement and are destabilizing our home and threatening to harm its inhabitants,” as he said. So he formed his own party that would represent the “responsible right”. Because “cancer” needs to be treated “responsibly”…

Culture Minister Miri Regev has also called African refugees a “cancer in our body.” While echoing Benny Morris’ genocidal prescriptions, Minister for Regional Cooperation Tzachi Hanegbi has warned that Palestinians may be bringing a “third Nakba” upon themselves.

Israel is basically Trump on steroids. With all the outrage about Trump’s racist remarks, it would be good to get a perspective about this in relation to the supposed “villa in the jungle”. That “villa” could just as well be considered a Trump hotel.

These words are not merely offensive because of their blatant racism, but because they are uttered by people with power, who have a decisive effect upon policy.

And when we look at Trump’s policy, we should remember that Trump started out his Presidency with the notorious ‘Muslim ban’. Israel has had a Muslim ban from the start, as I wrote at the time.

Trump loved the idea of ‘walls’. The “wall” and its inherent notion of “strong, incredible borders” is what he promised in his election campaign. When he came into office, he claimed that Mexico would pay for it, even as the administration asked lawmakers for $18 billion in order to add 316 miles of walls and fencing along the border and bolster 407 miles of existing barriers.

“President Trump is right. I built a wall along Israel’s southern border. It stopped all illegal immigration. Great success. Great idea”, he tweeted.

See? Israel is setting the standard, and boasting of it.

Comment: Israeli-Zionist Genocide And Racism Unmasked Since The Nakbah in 1948

So now Israel is making its next outrageous move regarding African refugees (mostly from Eritrea and Sudan), and is seeking to forcibly deport almost all of the nearly 40,000 refugees to a third country – Rwanda. Haaretz headline from Friday: “Israel to Pay $9,000 to Any Civilian Willing to Help Deport Asylum Seekers by Force”. Indeed, the Population and Immigration Authority published a notice that it is hiring 100 inspectors on a temporary basis for terms of two years to round up the refugees.

Job requirements: “The job requires a high school education. Experience in combat or security is a plus”, the ad states.

What innovation, huh? All in order to get those “infiltrators” out, sending them to possible torture and death at sea.

There should be no doubt, that the Africans are not welcome because they come from “shithole countries”, as Trump would put it. “Some Trump admirers are inspired by Israel’s tough treatment of African asylum seekers,” Rebecca Vilkomerson of Jewish Voice for Peace tweeted yesterday.

“a ‘deportation force,’ if you will. It’s not America, so nobody seems to mind them enforcing their borders.”

The far-right news website Bretibart ran a piece headlined “How to Successfully Stop Illegal Immigration: Follow Israel’s Model.” According to Breitbart, the following was Israel’s five-step process: 1. Build a barrier; 2. Forcibly deport illegal immigrants; 3. Provide incentives for illegals to leave on their own; 4. Cut off all government funds (that assist asylum seekers with food or shelter, including detention facilities) 5. Crack down on employers who hire illegals. (As Alison Kaplan Sommer reported in Haaretz).

Trump’s “shithole countries” statement was a slip exposing the tip of the iceberg of white supremacist attitudes, and Israel is once again providing the US with an unabashed model of just how this racism can become manifested in policy. The “villa in the jungle” idea is the one that white supremacists uphold about themselves in the U.S.

Comment: Despite the leftist media’s constant barrage of anti-Trump propaganda, he is neither a racist or white supremacist, nor are the vast majority of Americans.

Though Barak was a bit more cunning, because he said “villa” first, and “jungle” second, Trump was more crass. He just said “shithole countries”. But they basically mean the same thing.