The Election of Judge Moore is Being Hijacked by Jewish & Manipulated Blacks With Bold Lies! 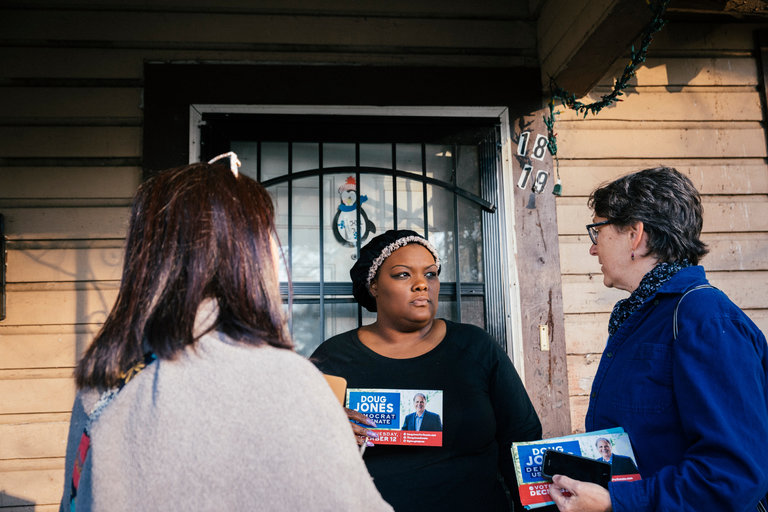 Elena Mason, center, spoke with canvassers for Doug Jones’s campaign in West Anniston, Ala., this month.

Kike Nathan Guttman has no problem though with the Union of Synagogue and State, hence the giant 40 ft satanic menorah that is erected up in front of the white-house lawn every December. And Rabbi Moline could care less about the US constitution. He is really referring to his Talmud, the constitution of the Jews which has usurped our American constitutional law.

The Jews hate the Moore because he fought against removing the Ten Commandments from the courthouse and because Moore strongly opposes pro-queer laws, pro-abortion laws, mass immigration and anti-gun laws, all which the Jews actively promote and lobby for to further their White Christian Genocide agenda .

The Jews’ media covered for Clinton, did all they could to protect Clinton from his very serious charges on sex crimes. But the Jews’ media is now doing all they can to destroy Roy Moore for his far less serious allegations.

The Jews media attacks on Roy Moore have nothing to do with justice for women and everything to do with preventing a sincere Christian from being elected. It’s all about the Jewish destruction of Christianity and nothing else. Jews don’t want REAL Christians like Judge Roy Moore in power, in political office. Why ? Because Jews, in order to attain and maintain their power, view Christianity, with its attendant moral influence, as a threat. For profligacy and perversion of sexual mores, places the Gentiles under the Jews’ dominion. More reasons can be read here

Operating in the realm of the press and mass media, Jews present Christianity in a bad light. This works to their benefit. For Christianity confers strength and moral fiber to the Gentile population, which would be a formidable force in opposing the Jewish quest for control.

FoxJews has jumped on the Jews media bandwagon to destroy Moore. Fox guarding the henhouse news occasionally shows their true colors like with this. FoxNews pretends to be pro Christian while they broadcast their subtle poison by helping the rest of the Jews’ media poison the election for Roy Moore.

The worst accusations to come out against Roy Moore so far is that he touched a woman over her clothing. But of course the Jews’ media reports it as sexual assault trying to make it seem like something Bill Clinton did.

If Moore was accused by somebody besides Jews’ media stooges, it might be something to take serious. But the media has a wicked history of protecting evil doers like Clinton while smearing squeaky clean Chrisitians like Michele Bachman.

Whether Roy Moore even saw or knew the so-called victim 40 years ago is anybody’s guess. The mass media attacks on Moore imply that he really is a Christian. Otherwise the Jews media wouldn’t attack Moore so viciously.

It goes without saying that the Jews media did all they could to limit the damage to Slick Willie in the rape interview with JB. Below is a watered down Jewtube 9 minutes of NBC’s Lisa Meyers interviewing Juanita Broaddrick about Bill Clinton raping her:

end note ~ Always remember…anybody getting bad press or coverage in the (((media))) is a enemy of the jews and an ally of the goyim, whether that person knows it or not. Support Roy Moore now  !

JEW RABBI SAYS ASSOCIATE OF ROY MOORE TOLD HIM HE BELONGED TO THE ‘FORCES OF DARKNESS’.

~ note – Yes ! No wonder the Jews and their judenpresse are going after Moore so hard….He’s a true Christian who knows Judaism (and Islam) is a false satanic religion and will not tolerate Jewish tyranny against Christians !

Judge Moore was sued by the ACLU for displaying the Ten Commandments in his courtroom foyer. He has been stripped of his judgeship and now they are trying to strip his right to practice law in Alabama. The judge’s poem sums it up quite well.

America the Beautiful, or so you used to be.
Land of the Pilgrims’ pride; I’m glad they’ll never see.
Babies piled in dumpsters, Abortion on demand,
Oh, sweet land of liberty; your house is on the sand.
Our children wander aimlessly poisoned by cocaine,
Choosing to indulge their lusts, when God has said abstain.
From sea to shining sea, our Nation turns away
From the teaching of God’s love and a need to always pray.
We’ve kept God in our temples, how callous we have grown.
When earth is but His footstool, and Heaven is His throne.
We’ve voted in a government that’s rotting at the core,
Appointing Godless Judges who throw reason out the door,
Too soft to place a killer in a well deserved tomb,
But brave enough to kill a baby before he leaves the womb.
You think that God’s not angry, that our land’s a moral slum?
How much longer will He wait before His judgment comes?
How are we to face our God, from Whom we cannot hide?
What then is left for us to do, but stem this evil tide?
If we who are His children, will humbly turn and pray;
Seek His holy face and mend our evil way:
Then God will hear from Heaven and forgive us of our sins,
He’ll heal our sickly land and those who live within.
But, America the Beautiful, if you don’t – then you will see,
A sad but Holy God withdraw His hand from Thee.
~Judge Roy Moore

IS ROY MOORE IN THE SENATE BAD FOR JEWS ? – READ IT FROM THE (((HORSES MOUTH))) FORWARD.COM

WHEN ROY MOORE COMPARED GAY MARRIAGE TO THE HOLOCAUST

note – Moore here used the jews own holohoax logic against the jews to fight their agenda to homosexualize the goyim ! I love it ! This guy is a smooth operator…

HOW THE JEWS THINK

My Comment:  The Zionist, Synagogue of Satan, run American politics…it should be obvious to anyone with eyes to see.  The reason people don’t is because they believe in a Fake Jewish Media really run by the Zionist Synagogue of Satan – an extreme Satanic sect of Jewish who are hell bent on destroying the United States and mass murdering Americans.  If Americans are to survive they had better wake up!