Bitcoin tops record $19,000, then plunges –CNBC
“In trading on the Coinbase exchange, the digital currency rose above $19,000 before falling more than 12 percent from that high. The price on Coinbase is often at a premium over other exchanges. Coinbase is one of the major cryptocurrency exchanges accounting for a third of bitcoin trading volume….The digital currency began the year below $1,000 and its gains have accelerated as investor interest grows. Chicago-based Cboe Global Markets is planning to launch bitcoin futures on Sunday, while the world’s largest futures exchange, CME, is set to launch its futures product the following week….Digital currency investor and former Fortress hedge fund manager Michael Novogratz also said last week that cryptocurrencies like bitcoin are ‘going to be the biggest bubble of our lifetimes.’ Novogratz also predicted last week that bitcoin could reach $40,000 by the end of next year. Between 5 and 6 a.m. New York time, bitcoin jumped past $15,000, its latest milestone after soaring through $12,000, $13,000 and $14,000 over about the last 33 hours, according to an index on CoinDesk.” 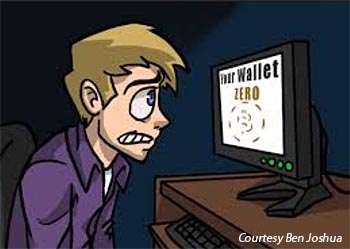 $62 Million In Bitcoin Stolen –IBTimes
“Cryptocurrency mining marketplace NiceHash announced Wednesday that it suffered a security breach that resulted in a loss of as much as $62 million in Bitcoin. The announcement came after hours of speculation sparked by the service being unavailable for the better part of Wednesday. Several reports from users noted that their Bitcoin wallets associated with NiceHash had been emptied. While NiceHash originally claimed to be ‘under maintenance’ during the outages, the company admitted that it had suffered a security breach involving the NiceHash website that resulted in loss of funds….NiceHash has yet to place an amount on how much is stolen, a Bitcoin wallet address highlighted by NiceHash users that appeared Wednesday and has received a large deposit out of nowhere contains 4,736.42 BTC, valued at about $62 million at current prices. The full extent of the breach is still unknown, and it is not clear if the attackers were able to compromise user information in addition to stealing Bitcoin. NiceHash has advised its users to change their passwords as a safety precaution.”

With every upward tick in bitcoin prices another hacker enlists in a growing army of bitcoin thieves. Wise money shifts profit from overpriced markets, like stocks and bitcoin, into underpriced markets, like precious metals. Call 800-289-2646 or click on the title to request a free copy of our new Special Report: BITCOIN: The Future of Money?