Did You Know That Muslims Revere Jesus?

As Christian denominations vie for control over the Church of the Holy Sepulchre, the 800-year-old key rests with a Muslim man named Adeeb Joudeh

ed note–Jes’ a lil’ thing to consider next time someone from Judea, Inc or one of its offshoots–including those ‘white’ nationalists or bible-thumpin’ Christian Zionists–start honking about the ‘danger’ posed to Christianity by Islam and DEM MOOZLUMS.

Furthermore, perhaps the various ‘experts’ warning about the danger of Islam to Christian civilization should aquaint themselves with the Treaty of Jerusalem, signed between Caliph Omar and the Christians of Jerusalem in 636 AD promising them that they would suffer no religious persecution under Muslim rule, to wit–

‘In the name of God the Merciful and the Compassionate…Behold this promise to the people of Jerusalem of safe conduct for their persons, property, their churches, their healthy and their sick. Their churches shall neither be used by us as dwellings nor destroyed, and no constraint shall be exercised among them in religion nor shall any harm be done to any of them. This document is placed under the surety of God and the protection of the Prophet Mohammed, the Caliphs and the believers, on condition that the inhabitants of Jerusalem pay the jizya (tax) that is due from them.’

The nonsense in the piece suggesting that this ‘arrangement’ whereby a Muslim holds the key to the most important church in Christendom is rooted in ‘financial reasons’ is complete BS. It is rooted in the fact that  Islam revers and loves Jesus, who is mentioned as many as 55 times in the Qu’ran compared to the 5 times that Mohammed is.

For those who might have an interest in all of this, Jews also mention Jesus in their religious writings as well. He is described as the bastard son of a Roman Centurian father and a Jewish prostitute who conceived Him while she was on her period. These ‘religious’ writings also claim that Jesus was a sex freak, a sorcerer and at this very moment, he is boiling in a cauldron of feces and semen.

Perhaps the Jewish ‘comedienne’ Sarah Silverman wasn’t just ‘doing schtick’ therefore when she applauded that her ancestors crucified Jesus, adding that she would personally ‘do it again, f****** do it again in a second’ if the opportunity for doing so arose. 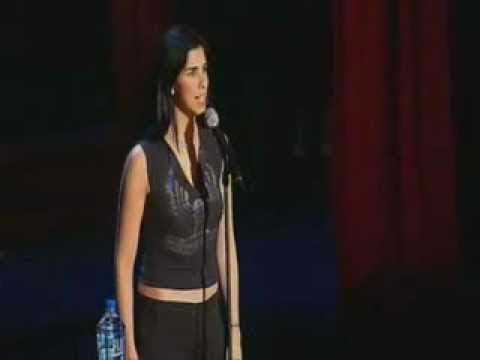 On Sarah Silver Man the Tranny who represents the political/cult Zionism!