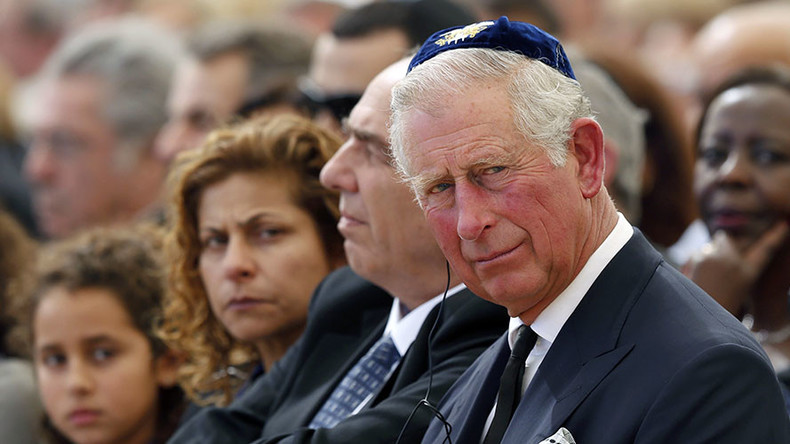 © Abir Sultan / AFP
In a newly revealed letter dating back to 1986, Prince Charles blamed the “influx of foreign, European Jews” for aggravating the Arab-Israeli conflict, voicing hope some American president would have the “courage to stand up to the Jewish lobby” one day.

The note, written on November 24, 1986, was found in a public archive and published by the Daily Mail. The Prince penned the letter after official visits to Saudi Arabia, Bahrain and Qatar with Princess Diana.

“I now appreciate that Arabs and Jews were all a Semitic people originally,” the then 38-year-old Prince of Wales wrote in his letter, adding, that “it is the influx of foreign, European Jews (especially from Poland, they say) which has helped to cause great problems” in the Middle East. “I know there are so many complex issues, but how can there ever be an end to terrorism unless the causes are eliminated?” he questioned.

“Surely some US president has to have the courage to stand up and take on the Jewish lobby in the US? I must be naive, I suppose!” he concludes. The Editor of the Jewish Chronicle, Stephen Pollard, described Charles’ comments “both shocking and entirely predictable.”

Both shocking and entirely predictable http://www.dailymail.co.uk/news/article-5073607/Letter-penned-Prince-Charles-sparks-controversy.html …

Prince Charles was fiercely criticised last night after it emerged he once urged the US to ‘take on the Jewish lobby’ – and blamed ‘the influx of foreign Jews’ for causing unrest in the Middle East.

“To me, the ‘Jewish lobby’ is one of the anti-Semitic themes that have endured for centuries. It is this myth there are these very powerful Jews who control foreign policy or the media or banks or whatever… That [the comments] come from the heir to the throne is unsettling, to put it mildly,” he told the Daily Mail.

A Clarence House spokesperson said the thoughts, expressed in the 1986 letter, were actually “not The Prince’s own views.”“The letter clearly states these were not the Prince’s own thinking on Arab-Israeli affairs, but represented the opinions of some of those he met during his visit which he was keen to interrogate,” the statement said. It added that Prince Charles was simply “sharing the arguments in private correspondence,” in a bid “to improve his understanding of what he has always recognized is a deeply complex issue.”