Will Gold Shine As Bitcoin Crashes?

America Needs a “Tax Reformation” –Pontification Blog
“In today’s struggle between globalist collectivism and nationalist individualism, we need more than tax reform. We need a Tax Reformation that again puts the individual taxpayer above the government and reasserts the ancient Roman Cicero’s motto that the good of the people is the highest law….The United States, which began as a free enterprise nation, now imposes a 35 percent tax rate on businesses, the highest among advanced countries….President Donald Trump’s wish to reduce business taxes to 15 percent is ‘unrealistic’ according to the left-of-center magazine The Atlantic. Yet 15 percent could bring 2.5 Trillion in overseas earnings home, and is the business tax rate in prosperous Germany, Luther’s homeland. The Left deems a 25 percent rate plausible. This is the business tax rate in Communist China – 10 percentage points lower today than in the ‘capitalist’ United States….The purportedly pro-business Republicans run Congress but have been hesitant to make President Trump’s tax cut proposals law….But if Democrats regain power because of Republican timidity or inaction, the rules will immediately be changed to raise taxes. Americans need again to see that lower taxes and smaller government – a Tax Reformation – are the path back to greater prosperity, freedom, individuality, and enterprise.” 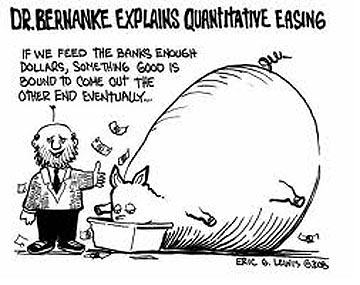 Fed economist: ‘No evidence that QE works’ as central bank starts unwinding program –CNBC
“The Federal Reserve is on the cusp of reversing the most ambitious monetary stimulus program in world history amid questions over how much impact it really delivered. There’s little question that the program, known as quantitative easing or ‘money printing,’ boosted the stock market….The economic impacts, though, are less clear. For most of the period, GDP struggled to gain more than 2 percent. Wealth disparity grew, income gains were hard to come by and the Fed continually came up short on its inflation goal….St. Louis Fed economist Stephen D. Williamson writes, ‘With respect to QE, there are good reasons to be skeptical that it works as advertised, and some economists have made a good case that QE is actually detrimental.’….History shows that central bank balance sheet reductions are often bumpy and lead to recessions. ‘Clearly, there is a risk of a policy error which could trigger a sell-off in global financial markets.'”

Will gold shine brightly again as bitcoin crashes? –The National
“In June I wrote about the many forces propelling gold prices to beat the S&P 500 so far this year, most critically a weakening US dollar and unpredictable new US president. For followers of the gold price it was the final break out above $1,300 last month that was most impressive and the quick sprint up in the price to $1,350 an ounce….The US Federal Reserve has now raised interest rates three times. You might expect higher interest rates to boost the dollar but rather this is seen as a sign of slowing growth opportunities for US assets and a negative for investors. Why then is the US stock market still so sky high? Well that’s now down to a concentration of speculation into a very limited number of stocks in the Nasdaq. Lesser company stocks have already fallen….One event to look out for is the collapse of the cryptocurrencies, now under assault from central banks around the world worried about losing control over the global monetary system and a speculative bubble….But why should investors in overvalued global financial markets and hot-air speculations like digital currencies retreat into precious metals at this stage in the cycle? It’s an insurance policy against disaster and a diversification that always has a residual value. Gold or silver, at least in physical form, is the oldest form of money, a real asset that cannot be spirited away by plunging global stock markets, nor lost as computer code containing supposed riches. And all it takes is a relatively small number of investors around the world to decide to allocate five to 10 per cent of their wealth to gold and silver to radically improve its valuation.”

Justice Department Begins Criminal Probe Into Equifax –Zero Hedge
“The U.S. Justice Department has opened a criminal investigation into whether top officials at Equifax violated insider trading laws when they sold stock before the company disclosed that it had been hacked, according to people familiar with the investigation. Equifax disclosed earlier this month that it discovered a security breach on July 29. The three executives sold shares worth almost $1.8 million in early August. The company has said the managers didn’t know of the breach at the time they sold the shares. Senator Heidi Heitkamp, a Democrat who sits on the Senate Banking Committee, said it was ‘disturbing’ that it appeared executives sold their stock before disclosing material information to the public. ‘If that happened, somebody needs to go to jail,’ Heitkamp said at a credit union industry conference in Washington. ‘It’s a problem when people can act with impunity with no consequences. How is that not insider trading?’….The total value of Equifax shares sold by Gamble, Ploder and Loughran 2 days after Equifax had discovered the data breach and 37 days before the company informed the public about the breach is $1.88 million.”