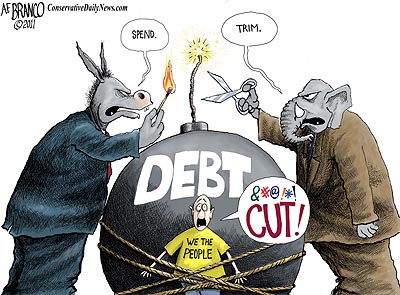 The Unpayable Debt Bomb –PontificationBlog
“America’s combined government and personal debt just hit $41 Trillion, equivalent to $329,961.35 per household – the greatest debt of a nation and its people in human history. But why worry? Treasury Secretary Steven Mnuchin says that by September 29th the government will run out of money and be unable to pay its bill. But by then Congress – unable to reduce its addictive spending – will raise the debt ceiling so politicians can borrow and print trillions more….Roughly 70 percent of America’s Gross Domestic Product (GDP) comes from consumer spending, and most of the rest comes from government spending. With infinite credit, what could go wrong? In this human-made Eden of ever-expanding credit, some have begun to notice odd things. Why has the credit card company VISA started bribing merchants to accept only plastic, and never cash, in customer payments? Banking giant JPMorgan Chase, reports ZeroHedge, ‘has banned cash payments for credit card debt, mortgages, and car loans. It has also banned the storage of “any cash or coins” in safe deposit boxes.’ Your bank is now required to spy on you by the government.” Full story

Next up: Fractured Republicans will face debt ceiling vote –AmericanThinker
“After failing to pass Obamacare repeal before leaving for their August recess, congressional Republicans will return after Labor Day with a deadline looming to raise the debt ceiling. There will be only 12 working days for Congress after members return to deal with the issue. Treasury Secretary Steven Mnuchin sent a letter to members warning that unless action is taken to raise the debt ceiling by September 29, the government will not be able to meet all of its financial obligations. Wall Street Journal: ‘The Treasury Department has been employing cash-conservation measures since March, when borrowing hit the formal ceiling of nearly $20 trillion. Those measures are expected to run out in early to mid-October. When they do, the government won’t have money to pay interest on debt, write Social Security checks or make millions of other routine payments, unless it can tap credit markets for borrowing to raise additional cash. Missing payments could send financial markets in a tailspin.’….Democrats will not bail Republicans out of this mess – and a mess it is almost certain to be. If you thought Obamacare repeal was a debacle, wait until the factions start lining up to support or oppose a debt ceiling increase.”

Will Your Retirement Be At The Center Of America’s Next Financial Crisis? –Forbes
“A few weeks ago United Parcel Service announced freezing its pension plans for nonunion staffers, or about 20% of its 434,000 workers worldwide. The freezing of Defined Benefit (DB) plans has become commonplace across America. According to Willis Towers Watson, in 2014 only 35% of Fortune 500 companies with DB plans still had open plans, down from a 50% open number just four years earlier in 2010….In a recent study from the Economic Policy Institute entitled ‘The State of American Retirement- How 401(k)s have failed most American workers,’ Morrissey writes that retirement account savings has stagnated or declined in the new millennium as traditional pension coverage has continued to decline.”

Treasury Department Ending Ineffective Retirement Program –Free Beacon
“The Treasury Department is ending an ineffective Obama program that promised to help millions of Americans save for retirement, the government announced Friday. Treasury announced the myRA program would be phased out, after costing taxpayers $70 million though few Americans used the program….Former president Barack Obama used his 2014 State of the Union address to launch the myRA program, with a promise to ‘help millions’ to save for retirement. Two years later, only 20,000 had signed up….A review of the program by the Trump administration found that 20,000 accounts have a median balance of only $500. An additional 10,000 accounts had no money in them at all….The program has cost taxpayers $70 million since 2014, and participants have contributed $34 million to their accounts.”