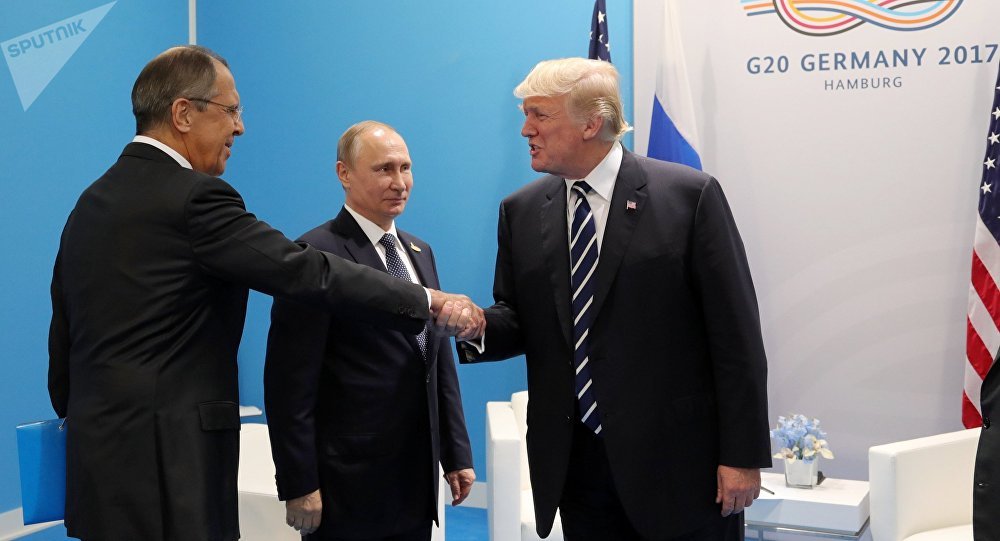 Russian Foreign Minister Sergei Lavrov held a press conference at the Hamburg Messe on the sidelines of the G20 Summit, on Friday, July 7.

Lavrov characterized the meeting between Putin and Trump as constructive, noting that the talks confirmed the shared desire to search for “mutually beneficial agreements.”

“It was indeed a long and substantial meeting,” Lavrov told reporters at a news conference in Hamburg. “My feeling is that it confirmed that both presidents are driven above all by the national interests of their countries and understand these interests in seeking mutually beneficial agreements, rather than trying to play confrontational scenarios…”

He then confirmed the reports that Putin and Trump have reached an agreement on a ceasefire in the south of Syria, which will come into force on July 9.

“Today in Amman [capital of Jordan] Russian, American and Jordanian experts… agreed on a memorandum of understanding to create a de-escalation zone,” he said, revealing that the ceasefire will be observed in the regions of Daraa, Quneitra and Sweida. “There will be a ceasefire in this zone from midday Damascus time on July 9.”

Russia and the US pledge to ensure the ceasefire is observed by all sides, Lavrov said.

The issue of security around the de-escalation zones will initially be provided by Russian military police, coordinated with the US and Jordan, Lavrov revealed.

Answering a reporter’s question about the issue of Ukrainian crisis being discussed by Trump and Putin, Lavrov said that the two leaders have agreed to set up a communication channel to advance the Ukrainian settlement on the basis of Minsk agreements.

There are opportunities to speed up the implementation of the Minsk agreements on Ukraine, Lavrov pointed out.

Cybersecurity was one of the most important topics at the meeting, Lavrov said.

“The [issue of cybersecurity] got a lot of attention, which is understandable,” Lavrov pointed out. “The presidents agreed that this area is becoming riskier, if you like, threats are emerging, like the terror threat, threats in other areas of organized crime, as well as threats to the normal way of functioning of societies. <…> President Trump mentioned that in the US, some circles are still fuelling — even though they cannot prove [anything] — the allegations of Russian meddling in the US elections.”

“It was agreed that all these issues taken together, including the fight against terrorism, combating organized crime, [computer] hacking in all its forms, will be the subject of Russian-American interaction,” he said.

When a journalist asked Lavrov a follow-up question on the issue, Lavrov reiterated Moscow’s position voiced on numerous occasions before.”President Trump, I’m sure, will either say [this] himself or Rex Tillerson [will], this campaign has acquired a rather strange character,” Lavrov pointed out. “Because in the course of the months that these allegations have been around, not a single fact has been presented, which is admitted by those in the [US] Congress who have led this movement at some point. <…> And President Trump said that he heard President Putin stating clearly that it is not true, that the Russian government did not meddle [in the elections],” Lavrov stressed.

The US government has accused Russia of meddling in the 2016 presidential election. Russia has repeatedly refuted all the allegations. Kremlin spokesman Dmitry Peskov has called the accusations “absolutely groundless.”