“Generations from now, Americans will look back at Donald Trump’s decision to leave the Paris Agreement as one of the most ignorant and dangerous actions ever taken by any President” President Donald Trump took what critics are saying is “one of the most ignorant and dangerous actions ever taken by any President” Thursday afternoon and pulled the United States out of the Paris climate agreement. (admin:  If Trump does something good the Zionists hate it;  they were expecting to make trillions off of this Hoax!)

“An abdication of American leadership and an international disgrace,” was how Sen. Bernie Sanders (I-Vt.) described the move, announced from the White House Rose Garden.

With scant mention of the word “climate,” Trump framed the decision as one being made in the interest of the “forgotten men and women” of America, who he has vowed to protect against the “exploitation” of foreign nations, putting “America first.” Long-debunked fossil fuel industry talking points about lost jobs and economic “suffering” peppered the speech that was said to be “literally wrong about every single thing.”

The real estate mogul said “we are getting out” of the non-binding accord but said he’d either re-negotiate the current agreement or forge “an entirely new transaction on terms that are fair to the United States, its businesses, its workers, its people, its tax payers… and we will see if we can make a deal that’s fair. And if we can, that’s great, and if we can’t, that’s fine.”

He ended the address saying that it is time to put American cities like “Youngstown, Detroit, and Pittsburgh…before Paris, France.”

Climate campaigners and other advocates of a global effort to combat global warming immediately condemned the move.

As the Mayor of Pittsburgh, I can assure you that we will follow the guidelines of the Paris Agreement for our people, our economy & future. https://twitter.com/presssec/status/870367903337644032 …

“Generations from now, Americans will look back at Donald Trump’s decision to leave the Paris Agreement as one of the most ignorant and dangerous actions ever taken by any President,” declared Sierra Club executive director Michael Brune. “Trump’s decision to ignore the vast majority of the American public and the scientific community will harm our country, costing us lives, jobs and our role as a world leader. Trump has isolated our country on the world stage, ceding our leadership position and our economic advantage on clean energy to India and China, and justifying it all by chanting a slogan from a baseball hat.”

“It’s a stupid and reckless decision,” declared 350.org co-founder Bill McKibben in a Thursday New York Times (New York Slimes at TomatoBubble for their endless lies again a Zionist shill) op-ed. “Our nation’s dumbest act since launching the war in Iraq. But it’s not stupid and reckless in the normal way. Instead, it amounts to a thorough repudiation of two of the civilizing forces on our planet: diplomacy and science.”

With an emergency White House protest called to counter the president’s speech, others vowed to “harness public outrage into meaningful on-the-ground action.”

“Trump has made his decision and we’re making ours,” said 350.org executive director May Boeve. “We won’t be dragged back by a shortsighted and destructive fossil fuel puppet in the White House.”

“We will harness public outrage into meaningful on-the-ground action,” Boeve continued. “By working at the local and regional level, communities can organize for powerful and lasting change, forcing elected officials to choose a side: that of Trump and his fossil fuel billionaire cabinet, or that of the people fighting for a stable climate and an economy that works for everyone.”

“with our world speeding toward a climate catastrophe, Trump just stepped on the gas.” (Admin:  Plants breathe carbon dioxide and carbon taxing would create a climate castastrophe-plant life will green the world!)

But, Suckling continued, (to the delight of their corporate greedy masters!)

“the rest of America will keep fighting global warming and this reckless president. We’ll battle his dangerous agenda in the courts, in the streets, and at the state and local level across the country. We won’t let corporate power and this corrupt administration condemn our planet to disaster.” 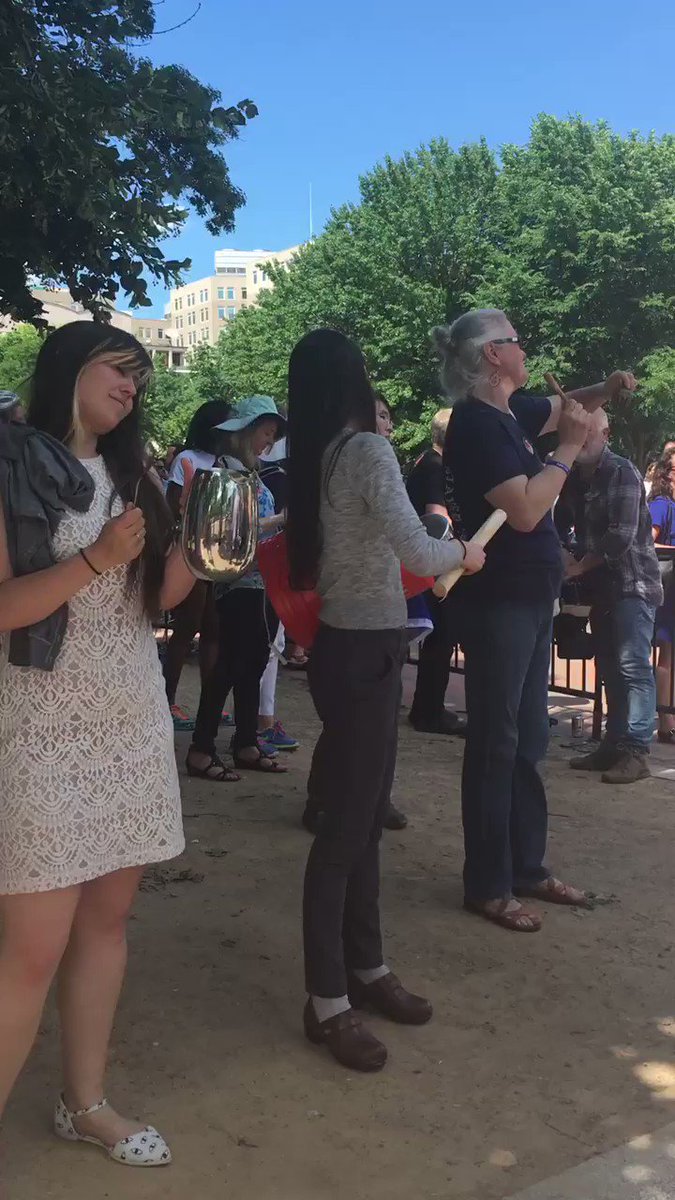 Noise demo in protest of @realDonaldTrump‘s withdrawal from Paris Climate Agreement. Air horns, pots and pans and a lot of noise out here!

Watch the speech below:

This work is licensed under a Creative Commons Attribution-Share Alike 3.0 License.