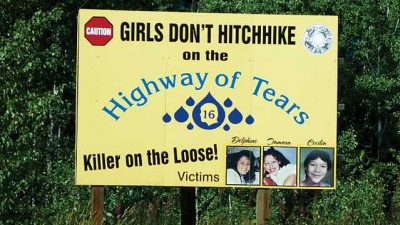 In truth, the killers have their hands full these days keeping Beijing satisfied. China’s direct investment in British Columbia’s resources and infrastructure has more than quadrupled since 2002, and the three biggest Chinese oil companies (PetroChina, Sinepec and Nexen) have until the spring of 2020 to sign contracts to secure B.C.’s vast Liquid Natural Gas (LNG) cornucopia. Unfortunately for the foreign devils, barely a tenth of the aboriginal nations that occupy these lands have shown a willingness to make such deals. And China, as we know, has a special knack for dealing with opposition.

Irene Mack, a freelance journalist near Smithers, has spent years documenting where aboriginal people go missing. According to her research, the heaviest concentration of disappearances is in the LNG – rich regions of the province.

“It’s undeniable when you map this thing. The three main LNG pipelines run straight through the Highway of Tears, from west to east through the biggest killing zones. Pacific Northern Gas Company, Prince Rupert Gas Transportation and West Coast Gas Transportation connect the coastal ports to Tumbler Creek and Fort St. John. All of it is on lands still occupied by native groups that have resisted signing deals with the companies.”

My Comment:  China’s special knack for dealing with opposition.  Kill them dead and sell their body parts!  Lots of money for body parts:  tens of thousands per body on the black market and No More Opposition to taking the land and the nat’l gas resources.  General Zhou Yongkang pictured who is heavily involved in these gangster operations on behalf of multinational corporations-no wonder these criminals want the corporate legal status to absolve themselves for liability for these killings!