Too Bad Smoloko.com is SO Racist Because They Have Important Information! Too Much Hatred Here!

My Comment (Admin):  I don’t agree with the racial slurs and race based hatred here.  The facts revealed are important.  Jewish people do not benefit from the Synagogue of Satan murdering them and their children as the rest of us are under attack too.  They divide and conquer with exceptional manipulation & deceit.  Truly the Synagogue of Satan is all Lies & Deceit.  I declare a Truth Jihad against them.

While the Alt Right clowns  (including ourselves, smoloko) were proclaiming Trump as their God Emperor during the elections, I was warning that he would be the most pro-Zionist president in US history, which is saying quite a lot. Although he loudly proclaimed his love for the jewish people and the jewish state during the elections, which his mesmerized supporters ignored, he has really shown his true colors since being inaugurated.

Fast forward to the president’s current international tour. After dancing around with a sword and signing a massive arms deal with Saudi Arabia, so that they can better arm ISIS and other Wahhabi terrorists, Trump hopped over to Israel to once again pledge his allegiance (subservience) to the jewish state.

There have already been some great photo ops. 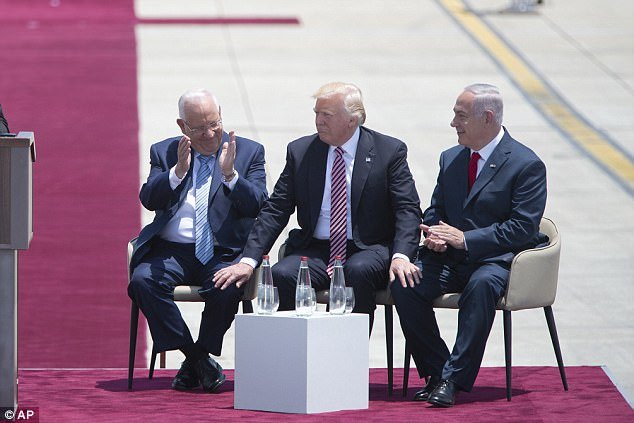 However, nothing says “I’m Israel’s little bitch” more than putting on a yarmulke and praying at the Western Wall, also known as the Wailing Wall.

This site is not officially recognized as Israeli territory, as it is still hotly contested, having been seized from the Jordanians during the 1967 war, along with East Jerusalem and the West Bank. (This is also when “our greatest ally” murdered 34 US servicemen and wounded 174 others while trying to sink the USS Liberty in international waters.)
Many US politicians and former presidents have humiliated themselves by wailing at the wall, but never has a US president done so while actively serving as the commander in chief!

National Security Advisor H. R. McMaster had said that Trump’s prayer at the wall is a private one and “no Israeli leaders will join President Trump at the Western Wall,” meaning Bibi was not allowed to tag along for the big moment.

“The President’s intention is to visit these religious sites to highlight the need for unity among three of the world’s great religions. Unity in confronting a very grave threat to civilization, and unity in embracing an agenda of tolerance.”

I doubt Trump will be visiting the Al-Aqsa Mosque in Jerusalem, which is the third holiest site in Sunni Islam. It is scheduled for demolition in the minds of Zionist fanatics so that the “Third Temple” can be constructed in its place. Israeli rabbis have already called upon Trump and Putin to help rebuild the jewish religious court on the Temple Mount. However, there is no evidence that there even existed any previous jewish temples there, and considering that their beloved Western Wall was actually part of a Roman fortification, it would not be surprising to learn that they fabricated yet another aspect of history.

Not everyone is satisfied with Trump’s subservience, though. Morton Klein of the Zionist Organization of America was disappointed that Bibi was not allowed to be there with his best buddy, but even more disheartened that Trump has yet to follow through on his promise of moving the US embassy to Jerusalem and declaring this land to be the eternal property of the jewish people (along with the rest of the world).

“We have praised his public stances concerning Israel but he seems to be backtracking at this point on things like moving the (U.S.) embassy from Tel Aviv to Jerusalem.”

Billboards welcoming president Trump to Israel line street of Jerusalem. ‘Make Israel Great’ – The Jews aren’t even bothering to hide their control over our presidents anymore !

This reminds me of when Obama signed the largest military aid deal in history with Israeli, to the tune of $38 billion (which poor Americans sure could use), but Israelis kvetched endlessly about how it wasn’t enough. They saw it as yet another slap in the face from that anti-Semite secret-Muslim Obama. Even US politicians like Sen. Lindsey Graham said it had “not (been) generous enough.”

The US government is filled to the brim with traitors. The American people need to come to terms with the jewish nature of the “deep state” and realize that we will never be able to “drain the swamp” by selecting yet another kosher candidate. Israel is our enemy, having attacked us numerous times (such as on September 11th, 2001), so anyone serving the interests of the jewish state needs to be brought to justice. Here is what the Constitution prescribes for such scoundrels:

Whoever, owing allegiance to the United States, levies war against them or adheres to their enemies, giving them aid and comfort within the United States or elsewhere, is guilty of treason and shall suffer death…

SATAN AT THE WAILING WALL