UPDATE: The misrepresentation of my article has spread to Natural News. http://www.naturalnews.com/2017-05-22-russia-preparing-pre-emptive-nuclear-strike-on-america-warns-paul-craig-roberts-prepare-to-die.html

A reader has alerted me to the misrepresentation of my position by Jayson Veley on newstarget.com.

Recently I reported that the Operation Command of the Russian military announced its conclusion that Washington was preparing a nuclear first strike against Russia. The Operation Command’s conclusion was based on a variety of evidence, such as the US ABM land bases on Russia’s borders and ABM deployments at seas off Russia’s coasts, the ability to replace ABMs with nuclear strike weapons and to fit Tomahawk missiles with nuclear warheads, the change in US war doctrine from the use of nuclear weapons as a retaliatory weapon to a first strike weapon, US noncompliance with various agreements, and the demonization of Russia by US propaganda. I pointed out Washington’s recklessness had created a dangerous situation by convincing Russia that the US was going to launch a nuclear first strike against Russia. I asked why no one in the US government was giving Russia reassurances and why there was no outcry in Congress, the media, or Europe.

Jayson Veley stands my concern on its head. Under the headline, “Russia preparing pre-emptive nuclear strike on America, warns Paul Craig Roberts,” Veley writes that “Paul Craig Roberts argues that it’s only a matter of time before Russia launches a nuclear strike on the United States and wipes out millions of innocent Americans.” http://www.newstarget.com/2017-05-22-russia-preparing-pre-emptive-nuclear-strike-on-america-warns-paul-craig-roberts-prepare-to-die.html

Veley then proceeds to misrepresent the Russian response to the UK government’s recent statement that the UK was prepared to use its nuclear weapons on a first strike basis. Against who but Russia? A Russian legislator scoffed at the British threat and said the UK would be wiped out if the UK got into a nuclear war with Russia. That is simply a statement of fact.

Veley turns the Russian response to threats into Russian threats against the US and UK. Here is Veley’s final paragraph: “There’s no getting around it – Vladimir Putin is a bully. And with all due respect to Paul Roberts and his article arguing for a U.S. policy of appeasement when it comes to the Russians, curling up into a fetal position and hoping that Vladimir Putin spares us is not an efficient strategy. As a matter of fact, it isn’t a strategy at all; it is surrender. The goal of the United States should always be peace, but sometimes in order to obtain that peace, you have to go toe to toe with the bully and pop him in the nose.”

Many herald the Internet and social media as allowing us to escape the fake news of the presstitutes. However, as Veley and newstarget.com make clear, the Internet can be used to misrepresent and spread fake news as easily as can the New York Times, CNN, Washington Post, NPR, and MSNBC. Websites can serve as many agendas as people and interest groups have. The CIA and George Soros may have or underwrite many Internet sites. We don’t know why Jayson Veley and newstarget.com are so far off target. Is it incompetence? Is it intention? Will I receive an apology? Will Veley’s article be taken down?

FacebookTwitterGoogle+Share
Admin:  Here is an article about the liberal Jason Veley (which to me has become Marxism) 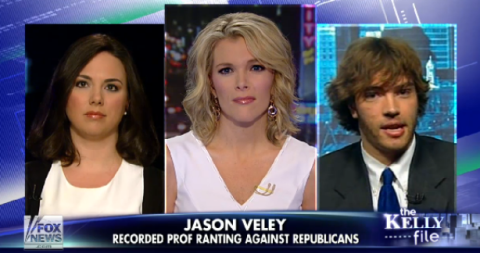 Strap yourselves in, folks. The good people of the American right have found another martyr, and this one doesn’t involve stepping over cow patties on the way to Golgotha. Let us meet Jason Veley, who managed to get his tremendous butthurt on Megyn Kelly’s show last night to demonstrate how he and his fellow students were forced to submit to opinions with which they disagreed…and at taxpayer expense. Poor lad. To borrow a line from the late Sam Kinison, he probably can use his hand for a whistle.

(By the way, the wingnut watchdog group to which Jason first appealed claimed that Jason Veley — That’s V-E-L-E-Y — wished “to remain anonymous,” probably to keep the Bureau of Land Management from colonizing his hair. That apparently lasted only as long as it took Megyn to bat her eyelashes at him and show him the golden staircase to his 15 minutes on the Calendar of Conservative Saints.) Anyway, here’s what the unfortunate creative writing prof said without realizing he had wandered into Jason’s own private East Germany.

“It’s absolutely possible that the Republicans will take over the Senate as well as the House. And we will live in a very, very, very different kind of country if that happens. I mean, colleges will start closing up if they, if these people have their way. “…racist, misogynist, money-grubbing people have so much power over the rest of us. And want things to go back-not to 1955, but to 1855,” Terry said to his Introduction to Creative Writing class Monday morning. There are a lot of people out there that do not want black people to vote, do not want Latinos to vote. Do not want old people to vote, or young people to vote. Because generally, people like you are liberal.”

Naturally, the customary political whining and bureaucratic folding-like-a-cheap-suit ensued. The professor apologized, abjectly. I mention this only because it undoubtedly will become A Thing in certain circles in which people otherwise would be complaining about the terrible stiflingby political correctness of young conservatives at America’s universities.