Who’s the real terrorist mastermind behind the 9/11 attacks ?

In a September,28,2001 interview Osama Bin Laden denied having anything to do with 9/11

“I have already said that I am not involved in the September 11 attacks in the United States. As a Muslim, I try my best to avoid telling a lie. I had no knowledge of these attacks, nor do I consider the killing of innocent women, children and other humans as an appreciable act.”

On the other hand, Benjamin Netanyahu has been openly gleeful about the 9/11 Terror Attacks

Apparently Israeli PM Benjamin Netanyahu is so confident in Jewish control and domination that he haphazardly stated publicly that the 9/11 terrorist attacks were “good” for US – Israeli relations, and would generate “immediate sympathy” for the Israeli cause of ethnically cleansing the Palestinians.

“We are benefiting from one thing, and that is the attack on the Twin Towers and Pentagon, and the American struggle in Iraq,” Ma’ariv quoted the former prime minister as saying. He reportedly added that these events “swung American public opinion in our favor.””
Benjamin Netanyahu   —   [16]

On September 11th 2001, as the dancing Israelis danced and Netanyahu chortled, “retired” Israeli Mossad Chief Mike Harari was in Bangkok, Thailand organizing a huge party to celebrate the success of his 9/11 operation. During the merry-making, Harari bragged to one of his associates, Dmitri Khalezov, that he, Harari, had been responsible for 9/11. (You can listen to my radio interview with Khalezov at http://noliesradio.org/archives/29582 .) Khalezov’s testimony is supported by documents showing the fake IDs Harari was using in Thailand.

Surprised by the ease in which this FBI spokesman made such an astonishing statement, I asked, “How this was possible?” Tomb continued, “Bin Laden has not been formally charged in connection to 9/11.” I asked, “How does that work?” Tomb continued, “The FBI gathers evidence. Once evidence is gathered, it is turned over to the Department of Justice. The Department of Justice than decides whether it has enough evidence to present to a federal grand jury. In the case of the 1998 United States Embassies being bombed, Bin Laden has been formally indicted and charged by a grand jury. He has not been formally indicted and charged in connection with 9/11 because the FBI has no hard evidence connected Bin Laden to 9/11.”

But there is tons of evidence indicating that JEWISH FINGERPRINTS are all over the 9/11 attacks and alot of big names in politics and military intelligence have even said so !

DR. ALAN SABROSKY: 9/11 AN ISRAELI MOSSAD OPERATION  Dr Alan Sabrosky is a Jewish American ( a rare exception among his tribe). He has a PhD from the University of Michigan. He was a US Marine Corps veteran, a Vietnam veteran, a graduate of the US Army War College & a Director of Studies at the US Army War College for over 5 years. Needless to say Jewish controlled corporate media never gives airtime to anyone who speaks the truth about 9/11. This is from the horses mouth.

Just 15 days after the 9-11 attacks, an exclusive interview with former Pakistani Gen. Hamid Gul. in which he opines that Mossad, not al-Qaeda were the perpetrators of the attacks, and suggests that if the USA has any evidence against Al Qaeda, it should present it to an international court. read hamid gul’s interview full here

or how about the dancing israelis caught celebrating the 9/11 attacks – yep…the only suspects arrested on 9/11 were israeli jews !!!

jim traficant – america is conducting israeli’s expansionist policy and everyone is afraid to say it !

America supplies arms, aircraft, bombs, money to Israel. This is insane. Israel hates us, Israel wants us dead, the Jew doesn’t like us, he hates us, he hates our freedoms. The Jew is doing everything he can to destroy us. 911 is proof of Jewish intentions.

The aftermath of what happened to us after 911 closes the case, Israel is trying to destroy us by getting us in ruinatious wars.  This is no joke, America is now bankrupt.  Osama bin Laden didn’t do this to us, he could not have destroyed our finances or freedoms.  Israel did it – Netanyahu is the key player behind the attack on our liberty.  Netanyahu is the primary threat to America, it is time to arrest this son of a bitch. 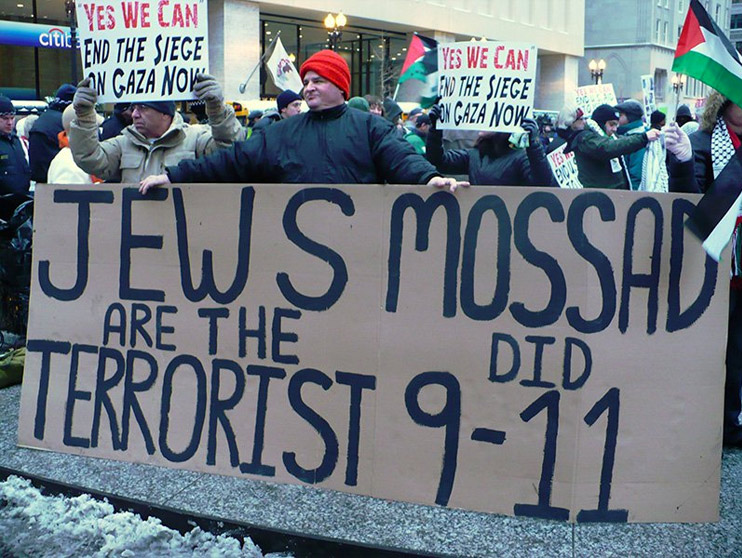 So what are we going to do people?  We have to to nuke that shitty little sandbox back to hell.   We should have done it immediately after 911, but we are ruled by pussies and cowards, and whores of Israel.  It is time for the USAF to put bombers over Tel Aviv and turn the Jew capitol city into rubble.

the shocking advance hints of the 9/11 attacks

Someone Tell Trump: It was Jews, Not Arabs, Dancing on 9-11

US KILLING OF BIN LADEN A CONTRIVED EVENT

“Frighten the West”: The Israeli Roots of Terrorism.

The USS Liberty: Every American Needs to Know

The USS Liberty is another example of Israel holocausting Americans like they did on September 11th 2001.  Despite what Donald Trump and all other kosher puppets say, Israel is not our greatest ally and never has been. THEY ARE OUR WORST FUCKING ENEMY !

Illuminati bankers give us endless supply of bogus threats

AL QAEDA BOOGEY MAN – ( and now ISIl) – bogus threats used to enrich the Illuminati Bankers while advancing their Masonic New World Order By brad olsen After the end of the cold War, the cabal realized another perceived national threat was necessary. They decided to create a radical…

CIA trying to create connection between conspiracy theorists and Bin Laden: US scholar Smoloko note -The fact of the matter is that the 9/11 terror attacks were planned,designed and carried out by Israeli Military Intelligence alongside the treasonous help of high US officials, most of whom were dedicated Zionists working…

9/11 was created by CIA, Neo-Cons and the Mossad