We Should All Be Ashamed of Ourselves: We Created This Refugee Crisis by Bombing the Shit Out of People’s Countries! 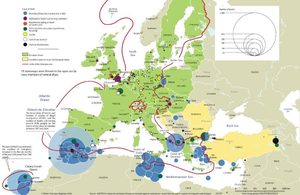 It has become an article of faith among liberals that Donald Trump is the world’s biggest enemy to refugees and Muslims, while the EU somehow offers them a safe harbour. After all, with the words “We can do it” Angela Merkel invited a million Syrian refugees into Germany, while Trump’s travel ban has slammed shut America’s door to some of the world’s most vulnerable displaced people. In today’s liberal mindset, it is Brexit that has stirred up hostility against migrants, while the EU is a bulwark of civilised values, protecting refugees from the threat of a resurgent far right.

If you were a migrant in a leaking boat approaching Lesbos, however, the treatment you would receive from Frontex, the EU’s border patrol, would be no less hostile than anything Trump could inflict. In Tunis last week a video showed Tunisian border police whipping cowering migrants from elsewhere in north Africa. This brutality was EU-sponsored. Like Libya, Morocco, Turkey and Egypt, Tunisia receives funding and training from Brussels through the European neighbourhood policy (ENP). Under a broader framework of “development” and “reforms”, these ENP countries serve as a buffer zone, making sure that refugees are intercepted and turned back – or, in Libya, locked up and tortured in refugees’ prisons – before these desperate people can reach the EU’s shores.

The idea that the Europe of Merkel and Theresa May is more welcoming to refugees than Trump’s America simply isn’t borne out by the facts. The EU’s deal with Turkey, condemned by humanitarian agencies, ensures that refugees arriving in Greece – regardless of their point of departure – will be sent to Turkey. Turkey now has the largest refugee population in the world, at about 3 million people.

This month Britain reneged on its promise to admit 3,000 unaccompanied child refugees. Concerned that the Balkan route is a weak link into Europe, Austria has mobilised aspiring EU members including Macedonia, Serbia and Kosovo into a Balkan frontier defence project to fortify the refugee entry points of the “Balkan corridor”. Last year Macedonian police used tear gas, grenades and stun guns against Iraqis and Syrians attempting to get through a razor-wire fence and into the country.

France dismantled the camp at Calais, leaving refugees to sleep in freezing woods, and last week Paris police placed boulders under a railway bridge near a refugee centre in order to prevent people from sleeping there. One of them told the Daily Mail: “We can’t get into the centre and are brutalised when we try to sleep nearby. The rocks are disgusting and inhuman.”

The EU even has far-right vigilantes guarding its borders, such as the Bulgarian Dinko Valev, filmed tying up Syrian refugees – including three women and a child – and claiming they were coming into the country to “kill us like dogs“. In many video recordings circulating online, others have flocked there to assist the vigilantes, claiming to be “protectors of women and faith“, and citing the Cologne attacks as their main incentive for protecting EU borders.

Comment: New Year’s in Cologne: Sexual crime and the radicalizing of European society

However, the anti-refugee, anti-Muslim rhetoric used by the vigilantes is not an exclusive feature of the far right. Trump openly expresses America’s hostility towards Muslims in a way no mainstream European politician would dare to do. Trump’s attitudes can be called out and exposed, but Europe’s are enacted far more covertly – and the current focus on Trump means that they are allowed to continue unchecked.

For instance, liberals threw up their hands in horror when Trump, in declaring his travel ban, declared that Christians from Syria but not Muslims would be admitted into the US. However, the EU revealed similar priorities when it agreed to give Georgia visa-free access to the Schengen zone, within which EU nationals can move without a passport. Echoing Trump, the vice-president of the European parliament argued that Georgia is a Christian country and the heart of Europe – remarks that would have been greeted with incredulity not only by refugees but by the citizens of Kosovo. This country is far closer to the heart of Europe than Georgia, but has a mainly Muslim population, and its attempts to join the EU have been consistently rebuffed.

Trump justifies his own clampdown by painting a picture of a Europe overrun with Muslim refugees, raping white women and committing terrorist acts. Yet Europe wrote the book on demonising Muslim refugees. Last week Bild, Germany’s largest newspaper, had to apologise for false reports that refugees had raped German women in Frankfurt; the rightwing British press stokes fears of refugees on a daily basis. We’re told that Trump is uniquely hardline in his anti-Muslim rhetoric. In fact, Europe’s long-standing draconian attitudes towards refugees and Muslims have helped to legitimise his approach.