You can unsubscribe
This message is from a trusted sender. |

Yoko Ono: “I had an affair with Hillary Clinton in the ’70s” 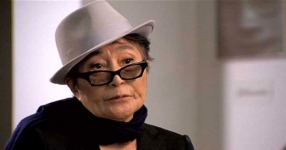 World News Daily Report
October 8, 2016
Los Angeles | Yoko Ono shocked reporters yesterday when she responded to a question concerning the presidential run of Hillary Clinton and the possibility that she could become the first woman President of the United States in American history.

The artist and widow of John Lennon, who is in Los Angeles to present a collection of cups and saucers she is exhibiting at the Museum of Modern Art, totally took reporters by surprise by admitting she had not only met the former First Lady at various times during a series of protests against the Vietnam War in New York in the 1970s but also knew her “intimately”.