ISIS DOES NOT REPRESENT MUSLIMS ANYMORE THAN THE KKK REPRESENTS CHRISTIANS

American muslims are fighting back against the Islamic state and taking back their religion by denouncing ISIS. One group, Sound Vision purchased a giant billboard in Chicago to display their disenfranchisement from the group and that ISIS doesn’t represent all Muslims and people of the Islamic faith signing with a hashtag #ActualMuslims. 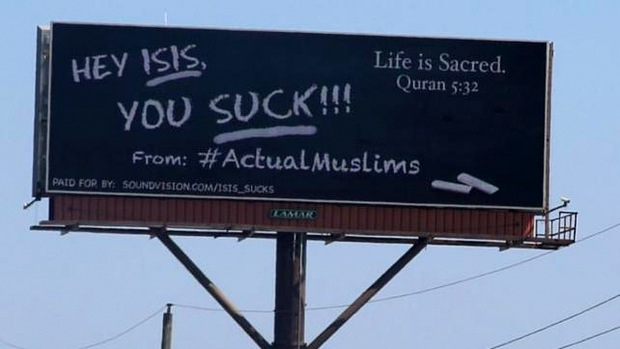 Quoting the Quran 5:32 saying “Life is sacred” signing their sign with a hashtag #ActualMuslims.
The Sign is off of Highway I-294, in Chicago according to a twitter user.

Social media has exploded with support with this sign quickly going viral on twitter, facebook and reddit. With the article topping reddits most read section within a day and many people are using this sign to express not all Muslims sympathize with terrorist ideology.

“Hey ISIS, you suck!” A billboard in Chicago from #ActualMuslims sick and tired of extremists hijacking their faith. pic.twitter.com/LxLIVUAbMP

According to NBC 5 Chicago the Billboard was organized by a group of concerned Muslim Americans who want to oppose ISIS ideology of extremist senseless violence.

“It’s about shouting out, ‘ISIS does not represent me, I’m Muslim, I say the word ‘sucks,’ I’m like everyone else in my country. We want to scream it from a billboard.”
~Leena Suleiman, a representative of the group, said.

Leena Suleiman went on to say that Sound Vision is planning to expand the “ISIS sucks” campaign to other major cities. For this Billboard alone they received donations from over 60 donors this campaign might just take off fast with the power of social media being able to seamlessly viral campaigns so easily therefore allowing them further funding to expand to other cities across the U.S.

This is a statement being made and it’s a powerful one, ISIS doesn’t represent the majority of all Muslims that it claims to violence is not automatically supported by people who subscribe to the Islamic faith. In fact the Quran itself opposes violence “All life is sacred” the quote on the billboard reads and this is a strong message coming from the Muslim community that they don’t condone those who use their faith for extremist actions against innocent people. This message will also reach the Islamic youth which ISIS has been trying to brainwash to convince them their Jihad is holy how will ISIS respond to using the Quran itself against them? There are many other ways to combat extremism but one way as a twitter user @jack_weinstein pointed out is “to stop punishing an entire religion for a segment who hijack for their own agenda.” Yes there are ISIS militant refugees but a little bit of love can go a long way and might be the difference between that militant contemplating an attack in the name of the Islamic state or feeling at home and not isolated with Islamophobia let’s not punish a whole religion over the actions of a few. Islamophobia only creates more lone-wolf attackers who feel like everyone has turned their backs on them.

I love the #ActualMuslims billboard. We need to stop punishing an entire religion for a segment who hijack it for their own malevolence.

The post Anti-ISIS Billboard In Chicago American Muslims to ISIS “Hey ISIS, You Suck” appeared first on We Are Change.