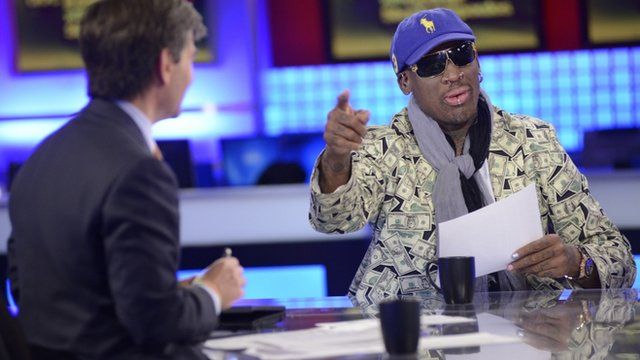 Media playback is unsupported on your device

North Korean leader Kim Jong-un wants US President Barack Obama to call him, and does not want war, according to retired basketball star Dennis Rodman.

When questioned about Mr Kim’s human rights record, Mr Rodman said he was not apologising for the North Korean leader, “but as a person to person, he’s my friend.”

North Korea’s Kim meets Dennis Rodman
My Comment:  WARS ARE THE BIGGEST MONEYMAKERS FOR THE ZIONISTS (AKA ROTHSCHILD KHAZARIAN MAFIA)…THEY MAKE MONEY LENDING AT HIGH INTEREST RATES TO BOTH SIDES AND SHARE IN THE LOOTING OF THE CONQUERED NATIONS AND THE SLAVERY OF THE CONQUERED PEOPLE WHO WORK FOR NOTHING TO SURVIVE…BIG MONEYMAKER…WHY ARE WE ALWAYS DOING THE BIDDING OF THESE ZIONISTS WHO FUNDED NAZI’S ……NO ONE WANTS WAR…..SO WHY ARE WE ALWAYS INVOLVED IN WARS????