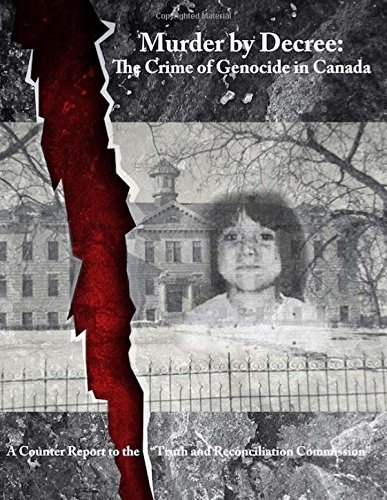 –      An Admission of Guilt? Quebec Catholic Arch-Bishop under suspicion of Ninth Circle complicity bans priests from being alone with children

3. Common Law Republic and its courts spread – Reclamations planned for the fall as speaking and organizing tours commence across North America and Europe

Vancouver: After three months of investigations, the independent inquiry known as the International Tribunal for the Disappeared of Canada (ITDC) has released a startling interim report. Based on more than a hundred interviews, the ITDC report claims that the number of missing women and children on Canada’s west coast is “far more vast than previously suspected … it is a huge number, probably in the thousands.”

To quote an excerpt from the report’s summary,

“Previous police investigations were deliberately skewed to focus only on aboriginal women in certain localities who had been reported missing after a span of months, and quite often years. But when one tallies the total number of disappeared people regardless of the time elapsed or the locale where they vanished, the big picture indicates that hundreds of mostly aboriginal families are literally vanishing at a constant rate across the entire province of British Columbia (B.C.), and especially in coastal towns and across the north.”

The active involvement of RCMP and local police officers, social workers, government officials and judges in these disappearances is also confirmed by the ITDC report.

“Every level of the government and legal infrastructure in B.C. is involved in these disappearances, from local social workers and doctors who target, criminalize, over medicate and transport native children out of their homes, to judges who order the subsequent arrest of these children’s parents, to the RCMP hit squads and their private contractors who dispose of targeted aboriginal families. The recent appointment of a convicted child trafficker, Ed John, as the special adviser to the provincial government on native foster care, is one example of the institutionalization of this system of in-house crime … Growing evidence suggests that Mr. John was placed in his position to provide governmental protection to the growing trade in trafficking native children through white foster homes and to undetermined numbers of overseas buyers.”

A special ITDC team operating out of Terrace and Powell River, B.C. has also discovered that Chinese companies with military connections are involved in aboriginal disappearances, as part of an “ethnic cleansing” program tied to the colonization of Chinese settlers to Canada’s west coast.

Sino Bright, a Chinese corporation that sponsors off shore private schools in China and Canada and advocates an escalating immigration of Chinese to Canada, is establishing a major operation in the coastal town of Powell River, which has historically been a hot spot for aboriginal disappearances, child trafficking and off shore drug importation from Asia. (See testimony of witness Dagmar Stephens, http://itccs.org/2011/02/02/memorandum-on-the-organized-disappearance-torture-exploitation-and-murder-of-women-and-children-on-canada-s-west-coast-a-summary-from-eyewitnesses/ ; see also http://www.theglobeandmail.com/news/british-columbia/chinese-private-school-could-open-campus-in-bc/article29795750/ )

According to one RCMP witness interviewed by the ITDC team,

“Just last year the FBI were nosing around Powell River searching for a team of serial killers that were hitting all around Seattle and were tied to Asian gangs. Then suddenly the FBI backed off. One of them remarked to my commander there was some kind of diplomatic pressure on them to stop looking in Powell River. The last group of cops that tried digging into what goes on in that town were all found dead in their motel room. Drugs, sure, the Triad and Yakuza gangs use the place to bring in their shiploads, everybody knows that. But something even bigger than that had to make the FBI back off.”

Chinese investment in Canada, and especially in British Columbia, increased fifteen times between 2004 and 2014, and now totals over  $13 billion. Much of that investment is concentrated in mining, lumber and power industries, often situated on traditional aboriginal lands still occupied by native bands. But the Chinese influence is expanding into many other sectors. (http://www.bcbusiness.ca/finance/how-chinese-investment-is-changing-in-bc)

According to the ITDC report summary,

“All our research indicates that powerful global economic and political forces are eliminating aboriginal populations in British Columbia with the same intensity as during the historic genocidal high point of European settlement between 1880 and 1920. The only difference now is that Trans-Pacific colonialism is behind the genocide, aided by Canadian governments and their police.”

On the basis of the ITDC report a common law court will be convened in Vancouver during the fall of 2016 that will seek to indict senior state, military, police and corporate officials in both Canada and China for the crimes against humanity being uncovered and documented by the ITDC.

The work of the ITDC continues. The Tribunal can be contacted at disappearedofcanada@gmail.com . More information on their evidence can be found in Murder by Decree: The Crime of Genocide in Canada (2016), at www.murderbydecree.com .

Vancouver, Nanaimo: In recent weeks, copies of the just-released book “Murder by Decree: The Crime of Genocide in Canada” have continually vanished off the shelves of the Vancouver Island Library system and the Vancouver Public Library without reasonable explanation by library staff. In response, an inquiry to the central library office in Vancouver has revealed a directive to branch libraries to remove all copies of the book “for examination and evaluation”.

When asked about this directive, a senior staff member of the Vancouver Public Library who chose to remain unidentified stated to Kevin Annett on June 3, 2016,

“We were advised that the contents of that book could create a litigation issue for the library”.

When asked who advised them so, the staff member said, “Lawyers for the City, and Victoria”

“You mean the provincial government?” (Kevin)

A similar request for explanation from the Vancouver Island Library office in Nanaimo has been ignored.

Copies of Murder by Decree and its companion work, Unrelenting: Between Sodom and Zion can be ordered through Amazon.com and createspace.com .

A Grand Jury in Altoona, Pennsylvania has issued a report that reveals a policy within the Catholic church of maintaining secret archives of evidence related to the trafficking and rape of children by priests. These archives are under the sole control of the local diocese Bishop and under so-called Canon law are never to be made public.

The Grand Jury’s report is part of a case that has already indicted a local Catholic Bishop, Stephen Raica, for aiding child rape and trafficking in his Diocese. Raica may stand trial within the next few months.

Last April, the Grand Jury’s investigators used court warrants to obtain access to Raica’s own secret archives and found that the identity of known child raping priests was being deliberately concealed by Raica. His action confirmed to investigators that the standing Vatican policy known as Crimen Sollicitationas, under which in-house child rape is to be concealed from the public and the police, is not only in effect but is binding on its officials.

“This discovery is earth shaking” commented a Pennsylvania attorney connected to the upcoming trial of Bishop Raica.

“In effect these secret archives could point to a broader system of planned malfeasance by the entire church that meet all the legal definitions of an institutionalized criminal conspiracy.”

(Copies of the Pennsylvania Grand Jury’s report can be obtained through the ITCCS central office at itccsoffice@gmail.com).

An Admission of Guilt? Quebec Catholic Arch-Bishop already under suspicion of child trafficking bans priests from being alone with children

Catholic clergy in Montreal are now prohibited from being alone with children while performing their duties, under a new ruling by Montreal Arch-Bishop Christian Lepine that tacitly acknowledges that Catholic churches are unsafe environments for children.

The sudden announcement by Lepine’s office came during the same week that new evidence surfaced linking Lepine to the trafficking and disappearance of children at Marie Reine du Monde Cathedral in downtown Montreal, as part of the Catholic Ninth Circle sacrificial cult. (see http://itccs.org/2014/08/16/child-sacrificial-cult-disrupted-arrests-made-in-montreal/ )

Arch-Bishop Lepine is an intimate and long time associate of Cardinal Gerald Lacroix, a confirmed member of the Ninth Circle and a participant in a February 23, 2014 ritual killing of a young boy at the Jesuit San Lorenzo church in Rome. On August 15, 2014, a planned ritual killing of two children at a Ninth Circle killing site in Outremont, a suburb of Montreal, was disrupted by an ITCCS team. In the material uncovered at this site and subsequently analyzed, Arch-Bishop Christian Lepine’s name was mentioned as one of the Montreal initiates of the Ninth Circle cult. This material and a letter of demand was sent to Arch-Bishop Lepine’s office this past month, on June 18, 2016, barely a week before his sudden announcement.

“Lepine is doing more than covering his own ass. He’s protecting members of the Ninth Circle in Montreal by casting a fog of beneficence and ‘concern’ around his entire Diocese, to mask the fact that it’s a child-killing ground” commented an ITCCS spokesman in Montreal today.

Quebec affiliates of the ITCCS are planning a series of actions around the Lepine affair and are considering convening a common law court inquiry into the Ninth Circle in Montreal. Contact itccsoffice@gmail.com to become involved.

Radio Free Kanata, the official public voice of the sovereign Republic of Kanata, will resume its weekly broadcasts on Sunday, September 4 at 3 pm pacific, 6 pm eastern time, 11 pm GMT. It will be live on the BBS radio network, located at www.bbsradio.com/radiofreekanata .

Radio Free Kanata was originally launched on BBS radio in February, 2015, soon after the proclamation of the Republic of Kanata by patriots across the former “dominion of Canada”. Its weekly listeners topped several thousand after just a few months, and  the show was heard all over the world. The program went off the air after eight months for reorganization.

For updates on the upcoming radio Free Kanata programs or to provide guests or ideas for the show, see www.itccs.org or write to republicofkanata@gmail.com .

3. Common Law Republic and its courts spread – Reclamations planned for the fall as speaking and organizing tours commence across North America and Europe

Slowly but surely, a network of common law action groups has been building across Canada and the world over the past eighteen months, united by a single aim: to actively reclaim their communities and nations under the new legal, political and spiritual jurisdiction of Natural Law, and to nullify and replace the authority of the British Crown and the Vatican. Eighteen such groups are now active in Canada alone, and are affiliated with the Republic of Kanata and its founding proclamation of January 15, 2015. (See http://itccs.org/2015/01/14/canada-is-proclaimed-a-sovereign-republic-crown-authority-is-nullified-common-law-established-as-supreme-authority/ )

Commencing in the first week in September, these groups will convene common law courts and issue indictments against criminals in high office, and will actively reclaim the land and wealth of their communities. Local Citizens’ Assemblies answerable only to the people will provide the legislative mandate for these courts. International observers will be present to spread the news of these actions to similar groups in nine other nations.

Kevin Annett and other leaders of this movement will be helping to catalyze these actions during September through speaking and organizing tours that will span Canada, the USA and Europe. Kevin has also been invited to speak before conferences in Italy, Germany, the Czech Republic and Russia during October.

Begin where you are, and help to convene the local Peoples’ Assemblies that will be the legislative core of new Common Law Republics. To learn more, join the movement, and book Kevin Annett and other speakers in your community, contact itccsoffice@gmail.com or hiddenfromhistory1@gmail.com , or by leaving a message at 386-492-2395 (USA).

Issued by the Central Office, Brussels