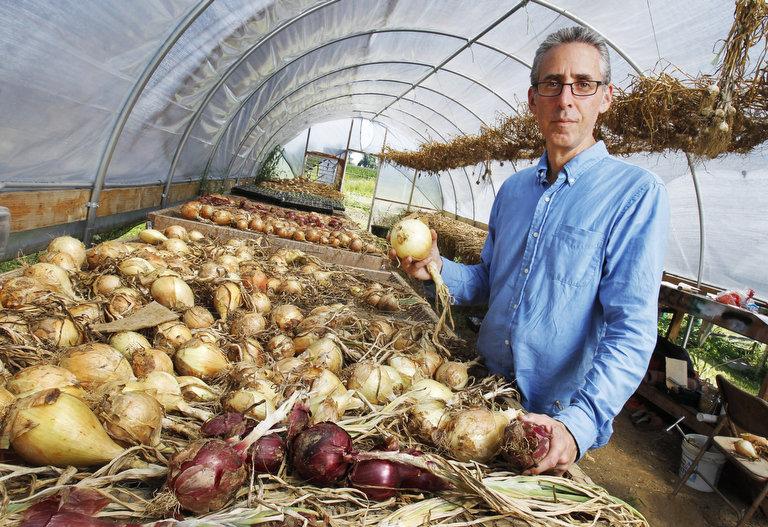 1 / 14
Doctor takes medical practice to his farm -promoting healthy eating and natural medicine
Dr. Ron Weiss is seen in his hoop house with onions that are curing on the historic 348 acre Ethos Health community supported agriculture farm that Dr. Ronald Weiss purchased in Long Valley, where he will be integrating the food grown on the farm into his medical practice.
Jerry McCrea/The Star-Ledger
Print Email

LONG VALLEY — After taking care of some of Hudson County’s sickest residents for 25 years, internist Ronald Weiss says he’s figured out how to make people healthy — and it’s not by writing prescriptions or ordering surgery.

Weiss would rather recommend a daily dose of what’s growing on his 348-acre, 18th-century farm in Long Valley. And next week, this city doctor will get that opportunity when he launches New Jersey’s first farm-based practice, rooted in the philosophy that the right food — fruits, vegetables, grains, nuts, beans and seeds — is medicine.

About 55 miles from his West New York office last week, Weiss sat outside the farmhouse at which his assistant, Asha Gala of Califon, had prepared a lunch that vibrated with color: a salad of baby kale, radicchio, purple carrots, cucumbers, onions and cherry husk tomatoes tossed with a walnut vinaigrette, followed by eggplant rollatini with tofu instead of cheese, and dairy-free chocolate pudding garnished with raspberries.

Fruits and vegetables contain nutrients that prevent inflammation, which is believed to be cause of many chronic diseases, said Weiss, a 52-year-old married father of two and an assistant professor at the Rutgers New Jersey Medical School in Newark.

“There are so many naturally occurring drugs on this plate,” he said. “Plant-based whole foods are the most powerful disease-modifying tools available to practitioners — more powerful than any drugs or surgeries.”

“I am not saying if you fall down and break your ankle, I can fix it by putting a salve of mugwort on it. You need someone to fix your fracture,” Weiss said. “I am talking about treating and preventing chronic disease — the heart attacks, the strokes, the cardiovascular disease, the cancers … the illnesses that are taking our economy and our nation down.”

Weiss said he so believes in this reinvention of his medical career, he cashed in all of his assets — even selling his practice, at which he still sees patients three days a week — to buy the farm. In June, he launched Ethos Health, a community-supported agriculture project.

His two farmers have produced fresh vegetables, fruit and herbs for 90 families, who pay a membership fee and volunteer their time picking potatoes and weeding. It’s a collaboration that encourages people to take a keener interest in their diets, which is where health care should start, he said.

“Human health is directly related to the health of the environment, the production of food and how it is grown,” said Weiss, who earned an undergraduate degree in botany at Rutgers College of Arts in Science in Newark. “I see this farm as an opportunity for me to take everything I’ve done all my life, all the biology and chemistry of plants I have studied, and link them to the human biological system.”

Weiss acknowledged that his philosophy is not shared by many of his peers.

He was thrilled when Kim A. Williams, president-elect of the American College of Cardiology, published an essay last month advocating his patients eat a plant-based diet. Williams described how becoming a vegan reduced his cholesterol levels after a low-fat diet had failed.

Some doctors, however, criticized Williams’ essay, saying a diet eschewing all meat, fish, eggs or dairy products is still experimental, according to published reports.

Nutrition science has long been a moving target for a confused public, hungry for answers on how to eat healthier. In March, the British journal Annals of Internal Medicine added to the mystery after reviewing 72 studies and concluding there was “no significant evidence that saturated fats increase the risk of heart disease.”

The plant-based diet is also a hard sell for some patients. For the doubters, Weiss tells them about 90-year-old Angelina Rotella of West New York, who came to his office on the night before Christmas Eve, in a wheelchair with congestive heart failure.

“I asked her, ‘Do you want me to call 911 and admit you to Palisades General? Or will you let me feed you sweet potatoes and kale?’ Amazingly enough, with the help of her daughter, she chose this,” Weiss said. “She doesn’t have diabetes anymore and chronic heart failure. She is cooking, sewing and walking around town. I’m not saying it’s easy, but she seized the opportunity and she is transformed.”

Angie Rotella-Suarez, who lives upstairs from her mother, said she faithfully prepared her meals, strictly adhering to Weiss’ diet of grains (such as whole-grain brown rice and sweet potatoes), steamed greens (including kale and spinach), fruit (a big serving of wild organic blueberries is a must) and water.

The results have been “more than a miracle,” Rotella-Suarez said in a telephone interview. Within two weeks, her mother stopped taking her blood pressure medication.

“Eight months later, she is down 40 pounds. My mother is out of the wheelchair. My mother does the dishes again,” Rotella-Suarez said, starting to cry. “She hasn’t done the dishes in seven years, easy.”

The recovery was so swift, Rotella-Suarez and her sister both adopted the vegan diet and each lost 40 pounds; they are no longer pre-diabetic.

“It sounds like a hoax, but Dr. Weiss is absolutely thorough. He is the best of what the medical profession has to offer,” she said. “He is not living in a make-believe world.”

There is something dreamlike about Weiss’ farm in Long Valley — a pastoral section of Washington Township, where 39 percent of its acreage is preserved for agriculture. Facing a canopy of mature trees on Schooley’s Mountain, the farm’s winding driveway circles a farmhouse listed on the national register of historic places. Visitors are greeted in the unpaved parking lot by Maya, farm manager Nora Pugliese’s dog, who barks and promptly rolls over for a belly rub. A crumbling German stone barn will be restored to serve as an exercise and wellness center where Gala, a nutritional education trainer, will offer cooking demonstrations and other programs.

Education is critical because people are being asked to abandon the only diet they’ve ever known. “If the patients wants to come with us, great,” Gala said. “We meet the patients wherever they are.”

“Food is Medicine,” a lecture by Weiss last Tuesday night, drew about 60 people to the Brookside Community Center in Mendham. Questions ranged from “How do you feel about vaccines?” (“I have two little children, and we have given them every single vaccine around”) to “Which are better for you? Raw or cooked vegetables?” (Both are good, but studies say celery and carrots are better cooked.)

Beth Niehoff of Mendham, a married mother of four, admitted the idea of changing everyone’s diet daunted her.

“What if you someone does this 80 percent?” she asked.

“Well, then you will have 20 percent of issues, which is fine. I work with people who say, ‘I don’t want to go that far,’ ” Gala said.

Weiss conceded it’s not easy convincing people to graze for their health in a fast-food world. Once a year, he confessed, he looks forward to eating a hot pastrami sandwich.

This story has been changed to reflect the name of the mountain adjacent to the farm. It is Schooley’s Mountain.