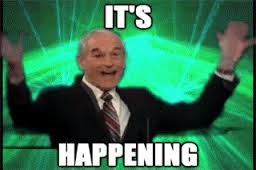 Ron Paul on Tuesday vowed he would not support Bernie Sanders’s White House run because of the Democratic presidential candidate’s similarities with Donald Trump.

“No, because he’s an authoritarian,” he said when asked if he’d back the independent Vermont senator on “CNN Newsroom.”

“He’s just a variant of Trump,” the former Texas representative added. “Even the things I worked with on Bernie, some of the foreign policy, he’s a part of the military industrial complex.
“He was a big voter for militarism. He’s an authoritarian of a different color, but Trump’s a super authoritarian. Trump wants to be the boss.”

Paul also argued that Democratic presidential front-runner Hillary Clinton does not present voters with a better option than Trump, her Republican counterpart.

“My biggest beef is that from a libertarian viewpoint there’s no meaningful difference between Hillary and Trump,” said Paul, who sought the GOP presidential nomination in 2008 and 2012.

“I mean, they both support the military industrial complex, the Federal Reserve, deficits, entitlements, invasions of privacy,” he added.

“It is super-nationalistic populism versus socialism. That is so remote from what we need to be doing. We need to be moving ourselves away from tyranny towards liberty.”

Trump leads the Republican field by nearly 16 percent, according to the latest RealClearPolitics average of polls. Clinton, meanwhile, possesses a roughly 10-point edge over Sanders, her sole competition for the Democratic mantle.