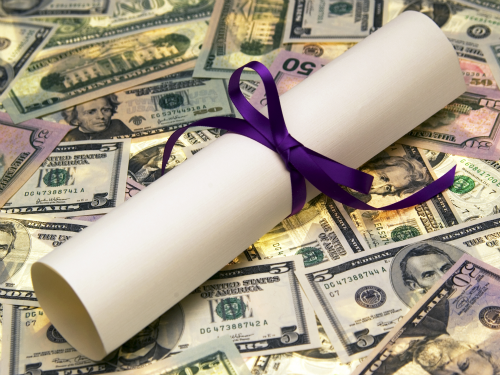 Financially speaking, going to college these days is practically a death sentence for most people. Tuition has never been more expensive, and most degrees no longer give you any guarantee of landing a high paying job. On top of that, it’s nearly impossible to escape these debts through default or bankruptcy.

That’s why there is now well over $1.3 trillion of student loan debtheld by millions of Americans. That’s more than the amount of credit card and automotive debt in this country. But at least these debtors can live their lives knowing that there won’t be any dire consequences for not paying, aside from having their wages and tax refunds garnished, and a poor credit score. Right?

Unfortunately, that may not be the case anymore. A Houston resident recently admitted that he was arrested at gunpoint by US Marshals, for failing to pay a $1500 federal student loan from 1987. He’s not alone either, as the US Marshals currently have between 1200 and 1500 warrants for unpaid student loans. You can listen to his terrifying account of what happened below.

Contributed by Joshua Krause of The Daily Sheeple.

Joshua Krause is a reporter, writer and researcher at The Daily Sheeple. He was born and raised in the Bay Area and is a freelance writer and author. You can follow Joshua’s reports at Facebook or on his personal Twitter. Joshua’s website is Strange Danger .