By now, it should be clear you cannot depend on industry or government to ensure the safety of the foods you eat. You must take matters into your own hands. I invite you to vote with your wallet and join me in boycotting GE foods and other tainted foods, including CAFO meat and dairy as they’re typically fed GMO feed and treated with antibiotics and growth-accelerating drugs.

Boycotting contaminated foods might not be as easy as you think, as many foods labeled “natural” are not really natural. Many “mom and pop” companies that started out on the right foot are later swallowed up by big corporations, with concerns over food quality tossed right out the window. True Activist assembled a printable list of nearly 70 food companies owned by Monsanto, which you can download here.9 Other small companies have fallen prey to other corporate buy-outs, such as: 10, 11

In fact, just 10 corporations control almost every product on grocery store shelves. How many of your products are owned by these ten mega-corporations? 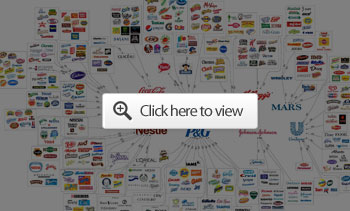