America’s Part-Time Jobs Boom –Zero Hedge
“On the surface, the December jobs number was better than expected, adding a 211,000 jobs at least according to the Establishment survey. However, a less pretty picture emerges when looking at the Household survey, and specifically the composition of full-time vs part-time workers. This is what the BLS said about the composition of job additions from the Household Survey: The number of persons employed part time for economic reasons (sometimes referred to as involuntary part-time workers) increased by 319,000 to 6.1 million in November, following declines in September and October. Furthermore, this 319K increase in part-timers for economic reasons more than accounts for the total increase in employed workers according to the Household survey, which rose by 244K to 149,364,000. Charted, it shows that the November jump was the highest since September 2012.” 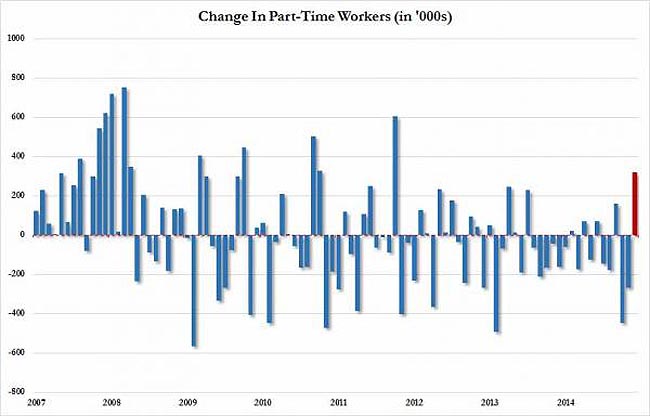 Strong job growth a sign of weakness –Marketwatch
“The U.S. economic expansion turns 6 1/2 years old this month, making it one of the longest on record. It is also the weakest expansion of the post-World War II era….In fact, job growth has been so consistently strong that the average monthly increase in nonfarm payrolls of 203,000 seems out of step with an economy limping along at an average 2.1% pace….Given the anemic growth in the labor force – 0.2% since the recession ended compared with an historical average of 1.5% – it doesn’t require that many new jobs to bring the unemployment rate down….Solid job growth is a reflection of lousy productivity growth.”

Strengthening the American dream through families –AEI
“It’s easy to feel pessimistic about the state of American society. Poverty is widespread. Steady, well-paying jobs are scarce. Economic inequality is high and mobility is low. Fewer adults are getting married, meaning more children watch their parents break up….A new report from the AEI/Brookings Working Group on Poverty and Opportunity may offer them a way forward….The report’s authors jointly endorsed several ideas that work within these constraints: 1) ‘Promote marriage as the most reliable route to family stability and resources.’ 2) ‘Promote parenting skills and practices’….3) ‘Promote skill development, family involvement, and employment’….Finally, in light of research showing how much children benefit from involved fathers in infancy and beyond, the authors urge expanding parenting programs to enroll new and expectant fathers as well as mothers.”

The foundation of restoring the American Dream is restoring self-government and family-government, not central-government. Chapter 10 of WE HAVE SEEN THE FUTURE AND IT LOOKS LIKE BALTIMORE: AMERICAN DREAM VS. PROGRESSIVE DREAM is titled “A Third Dream” which discusses today’s raging “dream war” with Progressivism. The chapter starts with this classic quote … “Government is the great fiction through which everyone endeavors to live at the expense of everybody else. They forget that the State lives at the expense of everyone.” – Friedrich Bastiat, French political philosopher.