65% of March Jobs Were Minimum Wage –Zero Hedge
“In March the US economy added a healthy 215K jobs, beating expectations and more importantly, pushing the average hourly earnings up by 0.3% on the month. Which, however, is curious because a cursory look at the job additions in the month reveals that nearly two-third of all jobs, and the three top categories of all job additions, were once again all minimum wages jobs….This “growth” of minimum wage labor took place while some of the highest paying jobs, including mining and logging, manufacturing and transportation and warehousing all posted declines in March. The only silver lining was that construction jobs posted a healthy 37K bounce, while government ‘workers’ added a solid 20K.” 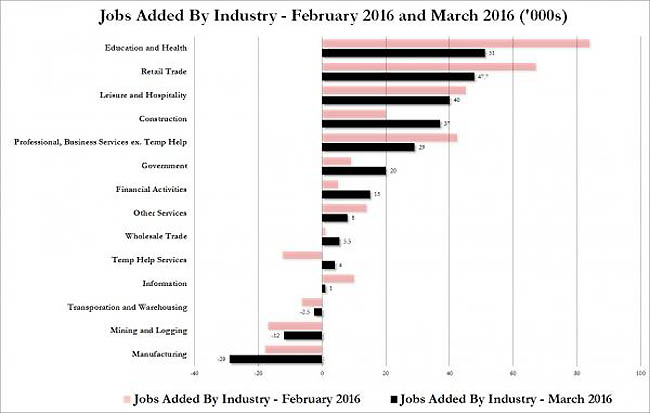 So what’s the real unemployment rate? –CNBC
“The Labor Department said Friday that the unemployment rate rose to 5 percent in March. But does that tell the whole story?….Most economists look past the official unemployment rate (also know as the ‘U-3’ rate) to other metrics that provide their own nuanced view of the economy. One of those metrics is the U-6 rate, a figure that includes more of the unemployed population than the U-3….The U-6 rate rose slightly to 9.8 percent in March….Despite the improvement that government statistics show, some economists think the real employment situation is much more dire. They point to the labor participation rate, which measures the portion of eligible Americans who are counted among the ‘labor force’ in calculating the unemployment rate….In March, that figure rose a tenth of a percentage point to 63 percent.”

Push for $15 Minimum Wage Heats Up –Wall Street Journal
“California and New York are moving to become the first states to lift the minimum wage to $15 an hour, propelling a wage target once focused on major urban areas into every corner of the economy from farm communities to industrial towns. Lawmakers in California on Thursday passed a $15 pay floor for large businesses by 2022 and all firms a year later. New York officials on Thursday struck a deal to bring the $15-an-hour minimum to New York City by 2019 and the rest of the state in subsequent years….The push by two of the nation’s four most populous states will widen a debate about the benefits and risks of elevated minimum wages in an election season marked by voters’ concerns about income inequality and the government’s role in shaping the economy….A $15 minimum would be like ‘a boulder’ hitting the labor market, affecting many more workers than the smaller increases before, said Jonathan Meer, a Texas A&M University economist who studies the minimum wage. For people i! n poverty, ‘I don’t know how it helps them to make it illegal to work for less than $15 an hour,’ he said.”

Central bankers’ secret new plan to crush the dollar –Rickards/The Crux
“The U.S. dollar has just been knocked down and forced to serve the interests of the world against the will of the American people….Based on the best information we’ve been able to obtain, it looks like the dollar has just been Shanghaied by the G-20 (the unelected, unaccountable group of 20 nations that collectively control the world monetary system). This could be the most important financial development of 2016, with enormous implications for you and your portfolio….It’s time to trash the dollar again. But the U.S. does not have the same skillful leadership we had in James Baker. This time, the big winner wonâ€™t be the U.S.; it will be China. The losers will be the same – Japan and Europe.”

The U.S. dollar fell into a technical bear market in Q1 2016 amid Fed uncertainty and ongoing currency wars. As we discuss in our 2016 World Money Report, “The dethroning of the dollar has the potential to trigger massive inflation, skyrocketing prices of staple goods, higher interest rates for critical purchases, and impossible financing terms for houses, cars, loans, etc. The fallout, fear and contagion could very well dwarf the financial crisis of 2008.”