WONDERFUL ARTICLE BY WE ARE CHANGE 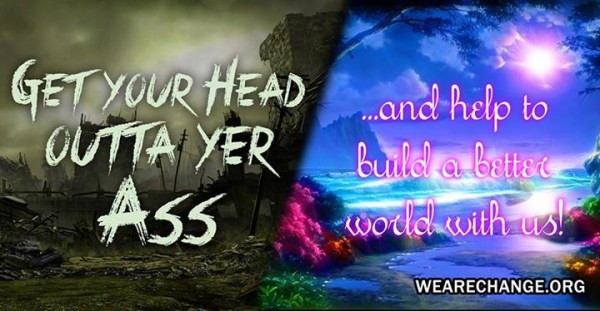 In the first part of this series, I detailed how there is enough food and water for everyone and how overpopulation is a myth propagated by eugenicists like Bill Gates. The critical issue that I cannot emphasize enough is that it is the upholding of this global system that is stopping this planet from being a paradise. If we stopped giving it power and instead worked with nature instead of against it, we would be left with the abundance our planet has gifted us with all along.

This system is largely controlled and maintained by a few select individuals that are purposefully making it this way. Only 85 people have the wealth of Earth’s 3.5 billion poorest and only 4 companies control the 147 companies that control everything. Several of these 85 ‘elite’ individuals are also embedded in this corporate power structure. Take into consideration these are Forbes articles, not a ‘conspiracy theory’. This understanding is topped off with the documented fact most wars are funded by international bankers that still have never been brought to justice. These people are still operating and see no reason to stop what they have always done.

So what can we do about this? This quote expresses the ethos perfectly…

“You never change things by fighting the existing reality.
To change something, build a new model that makes the existing model obsolete.”
– Richard Buckminster Fuller

We must create a series of systems based upon a new stream of consciousness; and some are already doing this.

Author, researcher, explorer, and scientist Michael Tellinger envisions a world without money, and since I can’t explain it as eloquently as Michael I won’t. I can tell that this system Michael has dubbed Contributionism is not barter or trade and it is extremely effective when implemented in small communities. Already 200 countries are beginning to implement Michael’s system to some scale or another. This system is so out of the current paradigm that many cannot grasp it due to how conditioned we are to perceive money as a necessity. Yet there is plenty of evidence showing Michael’s vision is reachable and not ‘utopian’. You can connect with a local Ubuntu party near you through here or even start your own.

An argument that is often used to discredit the idea of a contribution-based society is that humans are “naturally” greedy and competitive. This belief is still repeated to this day, however 400 peer reviewed studies have shown that humans are not innately competitive but are rather cooperative. The only reason we see competition and greed in our world today is that this global system encourages this atmosphere to breed incessantly through artificial scarcity and the pressure to survive. For example, the saying “earn a living” speaks for itself. This means that we are expected to “earn” our right to be alive. By accepting this fabricated concept, we keep ourselves stuck in this rat race to the point where many people have forgotten the power to think outside the box and have discernment.

If it weren’t for this system, we would harmoniously dance with each other into prosperity and abundance. That is no pipedream either – those studies have shown that cooperation is a primal behavior despite what many believe; or have been led to believe.

The Venus Project is an endeavor taken on and designed by Jacques Fresco to create a resource based society that would be atomized by advanced artificial intelligence. It would operate almost as a nervous system for many readily available advanced technologies, which would altogether interlock in a way that would end planetary suffering. This concept would not be ecologically harmful to the Earth and would free humans of the monetary system that has strictly limited our potential with the way it is being used.

A critical point to stress is that such technology does exist. Yet most is used militarily or isn’t because there isn’t enough “money” to fund it. Here are some examples:

1.) An atmospheric-water-generator that can collect water from the air – even in desert environments – yet it is currently only being used for military purposes.

2.) Ultra-efficient 4,000 mph vacuum-tube trains that are cheaper than highways or present railway systems.

3.) Various magnetic technologies that have shown the possible potential to supply limitless amounts of energy. The only thing coming in the way of most designs is harnessing the energy itself. The implications for free, limitless electricity are obvious.

4.) Cold-fusion technology perfected by Italian inventor Andrea Rossi have been confirmed by physicists and are readily available for the consumer market.

5.) Thorium is a very abundant and clean power source that can be utilized right now to supply energy to cars or entire cities.

7.) Water has the obvious potential to supply clean energy to any combustible engine without giving off any toxic by-product. Inventors like Stan Meyer, Daniel Green and so many others have established this as a feasible science that can be implemented at any time. The company Solar Hydrogen Trends Inc. has invented a hydrogen reactor and this is detailed in their press release.

It is also worth noting the United States Patent Office withholds over 5000 patents related to energy due to “national security”.

The resources are there, it’s simply a lack of money that comes in the way. They are even present in first world countries where some go without food because they do not have enough money to purchase it. One third of the food produced worldwide goes to waste because there is not enough money to purchase it. I know this struggle, it is extremely frustrating and can make or break you.

From an “educated” point of view this seems like a naïve observation, yet isn’t it time to ask ourselves if we can do better than this? Even democratic systems and representative republics have never fixed any of these basic issues; we must dig deeper in my opinion. We have to go to where we haven’t been before, and that’s a radical challenge; one we’ve never had.

One of the main issues with these systems isn’t the possibility of them not working; the problem is that humanity has been so programmed by this way of “life” that they sometimes cannot conceive another way to live. It is hard to envision another solution when the problem is all they’ve ever seen, and I understand this from personal experience. Astronomers are out looking for other planets that can support life while we rape this planet’s life into oblivion.

I see humanity as a race of beautiful master builders, so let’s come together in mutual growth as equals and build something greater. From my point of view, the risks of trying something new do not matter. It is in fact riskier to maintain a status quo that is destroying our planet, minds and spirit. We are at the cusp of a new evolution on so many levels of existence. It is something that we’ve never experienced before. Lets build something we’ve never had before.

This is my opinion. you may disagree and if it doesn’t resonate with you, feel free to walk away. That is your right and it isn’t any of my business to tell you otherwise. Thanks for reading.
Alec Cope in collaboration with Elina St-Onge