These Charts Show Which Foods Are Most Likely to Be Wasted

It’s estimated that 50 million Americans do not have access to enough food,1 yet 40 percent of food in the US goes uneaten. That’s the equivalent of 20 pounds of food per person each month.2

Every year, food worth the equivalent of $165 billion is wasted, much of which ends up in landfills and rots… adding to methane emissions. If food losses were reduced by even 15 percent, it could feed another 25 million Americans,3 slashing hunger rates by half.

On a global scale, as you might suspect, the numbers are even more striking… and the implications stretch far beyond hunger. An estimated 1.3 billion foods worth close to $1 trillion retail is wasted. As National Geographic put it:4

“Aside from the social, economic, and moral implications of that waste—in a world where an estimated 805 million people go to bed hungry each night—the environmental cost of producing all that food, for nothing, is staggering.

…The water wastage alone would be the equivalent of the entire annual flow of the Volga—Europe’s largest river—according to a UN report.

The energy that goes into the production, harvesting, transporting, and packaging of that wasted food, meanwhile, generates more than 3.3 billion metric tons of carbon dioxide.

If food waste were a country, it would be the world’s third largest emitter of greenhouse gases, behind the U.S. and China.”

Food Waste Occurs at Every Levels of the Food Supply Chain

There is potential for food loss and waste at virtually every step of the food system. From vegetables left in farm fields to rot because they are discolored to produce lost due to spills or spoilage during processing and distribution, the amount of food lost or wasted could easily feed the world’s hungry.

About two-thirds of waste occurs at the production and distribution level while the remaining one-third occurs at the consumer level.5 The Wasted report by the Natural Resources Defense Council (NRDC) detailed losses that occur at each stage of the food chain:6

Which Types of Food Account for the Most Waste?

Not all food is equally prone to being wasted. Perishable items, like fruits and vegetables, are most likely to go to waste, along with roots and tubers, according to the Food and Agriculture Organization of the United Nations (FAO).

Fish and seafood are next on the list, followed by dairy, meat and oilseeds, and pulses.

FAO’s infographic,7 which follows, shows a more specific breakdown, sorting food waste not only by type but also by country and point in the food-supply chain. What you’ll notice about North America are high rates of waste at the consumption level.

It’s estimated that the average US consumer wastes 10 times as much food as the average person in Southeast Asia.8 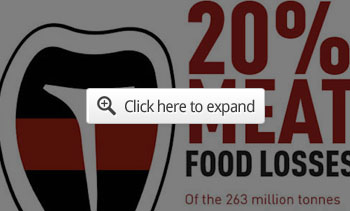 Reducing Food Waste Is the Answer to Feeding the World

There is enough food currently produced to feed everyone on the planet. Yet, in the US alone, 141 trillion calories end up wasted each year, which amounts to 1,249 calories per person, per day.9

NRDC estimates that for the average family of four in the US, an estimated $1,350 to $2,275 in food is lost annually.10 There are hidden or at least less obvious factors, too. When the resources to produce food are considered, the true cost of this waste amounts to:11

As National Geographic puts it, farming already uses up a sizeable portion of our land. We can’t keep growing more and more food to feed a growing population, nor do we need to. The answer lies in reducing food waste and losses:12

“The dividends of avoiding food waste can be historic. We produce enough food to feed everyone on our planet today and the 2.5 billion more people to come in the next 35 years.

We have to waste less to feed more. Farming already uses 38 percent of our ice-free land, compared to just 2 percent for cities, and uses 70 percent of our fresh water. We can’t keep growing more food, and continuing to waste as much, to feed more people.”

Simple Steps to End Food Waste in Your Home

Food waste must be dealt with on a large scale to stop much of the losses occurring at the farming, processing, distribution, and retail levels. However, you can make a difference starting in your own home. As NRDC explained:13

“Increasing the efficiency of our food system is a triple-bottom-line solution that requires collaborative efforts by businesses, governments and consumers.

The U.S. government should conduct a comprehensive study of losses in our food system and set national goals for waste reduction; businesses should seize opportunities to streamline their own operations, reduce food losses and save money;

…and consumers can waste less food by shopping wisely, knowing when food goes bad, buying produce that is perfectly edible even if it’s less cosmetically attractive, cooking only the amount of food they need, and eating their leftovers.”

Also important, learn how to properly organize your refrigerator. Certain parts of your refrigerator are colder than others while other spaces (like the shelves on the door) fluctuate in temperature. It’s important to store highly perishable foods that require cold storage in the coldest, most temperature-stable areas of your fridge to avoid spoilage.

One of my all-time favorite tricks, which works for most produce, is to create a “vacuum pack” to help protect food from oxygen and airborne microbes that will accelerate its decay.

Leave the produce in the bag it came in from the grocery store, place it against your chest, and use your arm to squeeze the excess air out of the bag. Then seal it with a twist tie. Or use an automatic vacuum sealer like the FoodSaver. Another important factor is knowing what expiration dates on your food really mean.

Labels like “use by” and “sell by” on foods aren’t actually an indicator of food safety, as many believe them to be, and research suggests more than 90 percent of Americans are throwing out food prematurely because of misunderstandings of what food dates actually mean. In short, many foods are still safe to eat even after they’re expired.

12 Tips to Reduce Food Spoilage and Use Up Leftovers

You can help to reduce your waste and use up your leftovers with the following 12 tips:14