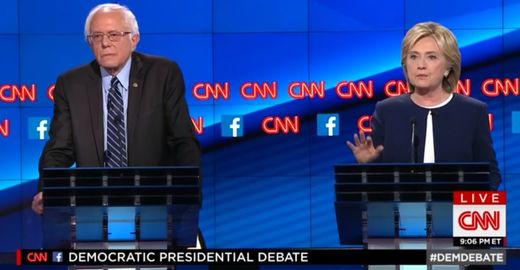 Under their skin, Sanders and Clinton are birds of a feather

The increasingly vocal actor Viggo Mortensen, perhaps best known for his leading role in the Lord of the Rings films, sounded off on United States military intervention in a recent HuffPo Live interview. In assessing United States military involvement in the Middle East, he stated that democratic socialist Bernie Sanders is “just as hawkish as Hillary Clinton.”

Mortensen was in New York for a dramatic reading of Howard Zinn’s Voices of a People’s History of the United States, which features new additions, including writings from Chelsea Manning and Glenn Greenwald. Democracy Now’s Amy Goodman also participated in the event.

Speaking on the terrible consequences of the Iraq War and United States military intervention in the Middle East, Mortensen said,

“I really don’t think Hillary Clinton, who voted for the invasion, is going to be bringing the subject up on her own. Neither would Bernie Sanders, frankly, because he also has voted for every military appropriation. He’s just as hawkish as she is.”

While Mortensen wasn’t 100% factually correct (Sanders’ has voted against some military appropriation bills), he was accurate in saying the senator has supported the major funding efforts for the Iraq and Afghanistan wars. Mortensen also brought up the Sanders’ staunchly pro-Israel foreign policy stance.

The interview touched upon the way the media helps to deflect public opinion away from the larger issues, which Mortensen claimed is how George W. Bush and his high level coterie were able to steal the 2000 election and steer us into indefinite military intervention. Dialing up the rhetoric, Mortensen also talked war crimes:

“If we’re gonna talk about Cheney and Rumsfeld and George W. Bush, let’s talk about [Paul] Wolfowitz, Condoleeza Rice, Colin Powell — all these people that really, if there was justice, should be in jail, they should really be in jail for war crimes and for treason.”

While Mortensen credited Sanders’ posture on climate change and even said he would like to see him as president, he lumped him in with with most other politicians — with the exception of Dennis Kucinich, who was one of the few voices of dissent in the buildup to the Iraq War (and who also wrote the preface to Mortensen’s book).

Sanders, who voted against the war in Iraq, nevertheless has a history of supporting war during his time in the senate. He supported President Bill Clinton’s 1999 war in Kosovo, he voted multiple times to fund the Iraq War, he supports the continued occupation of Afghanistan, and he supports Israel’s military occupation of Palestine. He also supports President Obama’s ongoing drone campaign. To his credit, he says it should be reformed, but he has not yet provided any details about his plan to modify it. Sanders has also failed to make any public statements regarding the United States’ bombing of a Doctors Without Borders hospital in Afghanistan, which killed 20 civilians and injured another 37. Additionally, Bernie Sanders has come under fire from progressives for his support of Saudi Arabia, which is leading a war crime-riddled campaign in Yemen, supports a brand of radical extremism called Wahhabism, and is guilty of numerous human rights abuses domestically.

In attempting to deconstruct the myth of American exceptionalism and its role in economic imperialism abroad, the HuffPo segment attempted to assess the power of citizens’ voices, invoking a passage from Howard Zinn’s A People’s History of the United States:

“What is common to all these voices is that they have mostly been shut out of orthodox histories, the major media, the standard textbooks, the controlled control. The result of having our history dominated by presidents and generals and other ‘important’ people is to create a passive citizenry, not knowing its own powers, always waiting for some savior on high — God or the next president — to bring justice and peace.”

The passage is eerily predictive of the populist fanfare behind Barack Obama in 2008, and now, Bernie Sanders in 2016. The zeal behind these campaigns places public figures on deified platforms without creating a fluid knowledge base of understanding with regard to how U.S. presidents must invariably serve the interests of the military-industrial-complex. As a result, many Americans continue to ignore the ongoing U.S. military occupation of Afghanistan and the U.S.-backed interventions in Libya, Yemen, Syria and other nations in the Middle East, West Asia, and North Africa.

“I understand why people don’t want to know,” Mortensen says. “When you do dig around and find things — whether it be in your local community, your family, or the way your national government is being run — it can be depressing.”

Comment: Though it is refreshing to hear someone in the public eye say the things that Mortensen is saying (and recently with Quentin Tarantino about police violence), there seems to be, out of so many well known people capable of seeing and speaking out against injustice, precious few who are actually doing it.On another note, we’d do well to remember that most politicians would not even be considered a viable “selection” for the presidency unless they could be more or less counted on take a hawkish line on things, since that’s what the U.S.’s shadow government – the puppet masters – are pushing for.