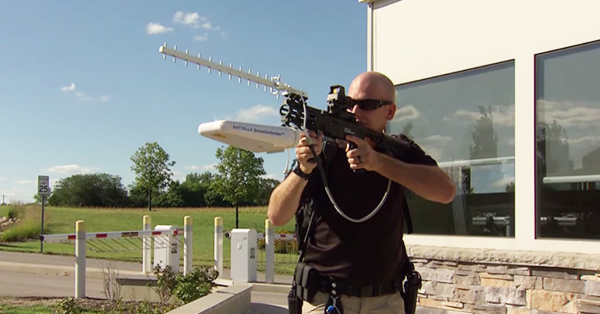 US sci-tech contractor Battelle has developed a revolutionary gun that can target and stop UAVs dead at a range of just 400 meters using radio signals. It expects to make it available to US government agencies next year.

“The DroneDefender can help protect us from those who may wish to do us harm. It can help us in numerous settings, from the White House lawn to bases and embassies overseas; from prisons and schools to historic sites. It easily and reliably neutralizes the threat,” boasted Dan Stamm, who led the research project for the Ohio-headquartered non-profit company.
Makers say that the model, which looks like a gun with an antenna, instead of a barrel, weighs less than 5 kg, can be switched on in less than one 10th of a second, and can operate for five hours straight without a recharge.

To work it, the shooter simply sees the drone, and catches it in its scope, before pressing a trigger.

“The system works by disrupting radio control frequencies between the drone and the pilot. It basically makes the drone think that it’s gone out of range. The drone enters into its safety protocols which include one of three options. It’ll either hover in position until the pilot can regain control link, it lands so the pilot can recover it physically, or it returns to its point of origin,” Stamm told Motherboard.
Disrupting both the remote control for the UAV and the GPS signal it sends out, Stamm says the gun should be “effective against all commercial drones in the United States.”

The makers have placed a particular emphasis on not damaging the drone, which might not be a hostile object, so much as a nuisance, in a sensitive area, such as an airport, or a secure government site.

“Purposefully doing damage to aircraft, even by federal agencies, is a big challenge without rules of engagement, so that’s one of the reasons we’re pursuing this route,” explained Stamm.
The DroneDefender appears to use similar technology Anti-UAV Defense System (AUDS) introduced by a group of UK companies earlier this year. By contrast, AUDS appears a much more complex van-mounted system, and comprises a radar that detects UAVs within a five mile range, a sophisticated optical camera, and a powerful wave gun.

Previous solutions often appeared to be less elegant, with a European consortium testing a laser that shoots down drones, and the US Army using guided missiles, shot from a hefty pellet gun. These may find more use in warzones, than public neighborhoods.

But in any case, with shooting drones still illegal in the US, at least, Stamm admitted that there are “slim chances” that Battelle’s or any other anti-drone systems would be licensed for private use in the immediate future.