Silver: A Bigger Upside Than Gold

EDITOR’S NOTE: Silver is making headlines early in 2023. Many analysts are expecting a big year for the white metal: Bigger than gold! 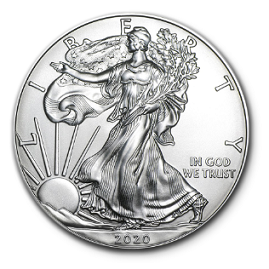 Prices of silver could hit a nine-year high of $30 per ounce this year – possibly outpacing gold prices.

The last time spot silver touched $30 levels per ounce was in February 2013, according to closing price data from Refinitiv.

Insufficient supplies of silver as well as its tendency to be a better performer than gold in periods of high inflation are key drivers supporting the outlook, analysts told CNBC.

“Silver has historically delivered gains of close to 20% per annum in years inflation is high. Given that track record, and how cheap silver remains relative to gold, it wouldn’t surprise to see silver head towards $30 per ounce this year, though that will likely offer significant resistance,” said Janie Simpson, managing director at ABC Bullion.

The precious metal last traded $24.02 per ounce, against the backdrop of an inflation rate of 6.5%. READ MORE

Dean Heskin is President and CEO of Swiss America Trading Corporation and the editor of this newsletter. Mr. Heskin started with the firm in 1992 as an account executive and was named CEO in 2012. For nearly thirty years, Mr. Heskin’s opinions and perspectives have been sought after and shared with many. You may have read, seen or heard him on the numerous media interviews he’s conducted with; FOX News, The Wilkow Majority, The Wayne Allen Root Show, CBS MarketWatch, Off the Grid and more. Dean is happily married, has five children and currently resides in Scottsdale, Arizona.

Precious metals are hot due to rising financial uncertainty. Walking Liberty Half Dollars are a very popular U.S. half-dollar coin, minted in 90% silver between 1916-1947. Swiss America is offering readers these coins at $12.50/ea, 250 limit per customer. Call 800-289-2646 or register Click here for more info!

Swiss America Rewards Referrals!Do you know someone who might be interested in owning precious metals? Many of our clients come to Swiss America as a result of referrals. As a thank you for referrals, you are eligible to receive a complimentary One-Ounce Silver American Eagle coin! Click HERE for details!