Comment:  American’s Pension Monies Fund BlackRock and are being used to STARVE Everyone into Submission to the Soulless Billionaire Elites of the British Empire.  Americans of the future will live in 3rd World Poverty due to BlackRock’s hiking up Rents, Mortgages and food prices.  This is WAR!!!!  All Ceo’s belong to Secret Societies and all Secret Societies are at the top Satanists. 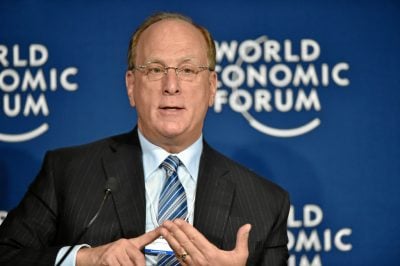 Why is much modern food of inferior quality? Why is health suffering and smallholder farmers who feed most of the world being forced out of agriculture?

Mainly because of the mindset of the likes of Larry Fink of BlackRock – the world’s biggest asset management firm – and the economic system they profit from and promote.

In 2011, Fink said agricultural and water investments would be the best performers over the next 10 years.

“Go long agriculture and water and go to the beach.”

Unsurprisingly then, just three years later, in 2014, the Oakland Institute found that institutional investors, including hedge funds, private equity and pension funds, were capitalising on global farmland as a new and highly desirable asset class.

Funds tend to invest for a 10-15-year period, resulting in good returns for investors but often cause long-term environmental and social devastation. They undermine local and regional food security through buying up land and entrenching an industrial, export-oriented model of agriculture.

In September 2020, Grain.org showed that private equity funds – pools of money that use pension funds, sovereign wealth funds, endowment funds and investments from governments, banks, insurance companies and high net worth individuals – were being injected into the agriculture sector throughout the world.

This money was being used to lease or buy up farms on the cheap and aggregate them into large-scale, US-style grain and soybean concerns. Offshore tax havens and the European Bank for Reconstruction and Development had targeted Ukraine in particular.

Western agribusiness had been coveting Ukraine’s agriculture sector for quite some time. That country contains one third of all arable land in Europe. A 2015 article by Oriental Review noted that, since the mid-90s, Ukrainian-Americans at the helm of the US-Ukraine Business Council have been instrumental in encouraging the foreign control of Ukrainian agriculture.

In November 2013, the Ukrainian Agrarian Confederation drafted a legal amendment that would benefit global agribusiness producers by allowing the widespread use of genetically modified seeds.

In June 2020, the IMF approved an 18-month, strings-attached $5 billion loan programme with Ukraine.

It is interesting to note that Larry Fink and BlackRock are to ‘coordinate’ investment in ‘rebuilding’ Ukraine.

An official statement released in late December 2022 said the agreement with BlackRock would:

“… focus in the near term on coordinating the efforts of all potential investors and participants in the reconstruction of our country, channelling investment into the most relevant and impactful sectors of the Ukrainian economy.”

With more than $813.5 billion invested in arms manufacturing companies, BlackRock is in a win-win situation – profiting from both destruction and reconstruction.

BlackRock is a publicly owned investment manager that primarily provides its services to institutional, intermediary and individual investors. The firm exists to put its assets to work to make money for its clients. And it must ensure the financial system functions to secure this goal. And this is exactly what it does.

Back in 2010, the farmlandgrab.org website reported that BlackRock’s global agriculture fund would  target (invest in) companies involved with agriculture-related chemical products, equipment and infrastructure, as well as soft commodities and food, biofuels, forestry, agricultural sciences and arable land.

According to research by Global Witness, it has since indirectly profited from human rights and environmental abuses through investing in banks notorious for financing harmful palm oil firms (see the article The true price of palm oil, 2021).

Blackrock’s Global Consumer Staples exchange rated fund (ETF), which was launched in 2006 and, according to the article The rise of financial investment and common ownership in global agrifood firms (Review of International Political Economy, 2019), has:

“US$560 million in assets under management, holds shares in a number of the world’s largest food companies, with agrifood stocks making up around 75% of the fund. Nestlé is the funds’s largest holding, and other agrifood firms that make up the fund include Coca-Cola, PepsiCo, Walmart, Anheuser Busch InBev, Mondelez, Danone, and Kraft Heinz.”

The article also states that BlackRock’s iShares Core S&P 500 Index ETF has $150 billion in assets under management. Most of the top publicly traded food and agriculture firms are part of the S&P 500 index and BlackRock holds significant shares in those firms.

The author of the article, Professor Jennifer Clapp, also notes BlackRock’s COW Global Agriculture ETF, has $231 million in assets and focuses on firms that provide inputs (seeds, chemicals and fertilizers) and farm equipment and agricultural trading companies. Among its top holdings are Deere & Co, Bunge, ADM and Tyson. This is based on BlackRock’s own data from 2018.

“Collectively, the asset management giants – BlackRock, Vanguard, State Street, Fidelity, and Capital Group – own significant proportions of the firms that dominate at various points along agrifood supply chains. When considered together, these five asset management firms own around 10%–30% of the shares of the top firms within the agrifood sector.”

BlackRock et al are heavily invested in the success of the prevailing globalised system of food and agriculture.

They profit from an inherently predatory system that – focusing on the agrifood sector alone – has been responsible for, among other things, the displacement of indigenous systems of production, the impoverishment of many farmers worldwide, the destruction of rural communities and cultures, poor-quality food and illness, less diverse diets, ecological destruction and the proletarianization of independent producers.

Due to their size, according to journalist Ernst Wolff, BlackRock and its counterpart Vanguard exert control over governments and important institutions like the European Central Bank (ECB) and the US Federal Reserve. BlackRock and Vanguard have more financial assets than the ECB and the Fed combined.

BlackRock currently has $10 trillion in assets under its management and to underline the influence of the firm, Fink himself is a billionaire who sits on the board of the World Economic Forum and the powerful and highly influential Council for Foreign Relations, often referred to as the shadow government of the US – the real power behind the throne.

Researcher William Engdahl says that since 1988 the company has put itself in a position to de facto control the Federal Reserve, most Wall Street mega-banks, including Goldman Sachs, the Davos World Economic Forum Great Reset and now the Biden Administration.

Engdahl describes how former top people at BlackRock are now in key government positions, running economic policy for the Biden administration, and that the firm is steering the ‘great reset’ and the global ‘green’ agenda.

Fink recently eulogised about the future of food and ‘coded’ seeds that would produce their own fertiliser. He says this is “amazing technology”. This technology is years away and whether it can deliver on what he says is another thing.

More likely, it will be a great investment opportunity that is par for the course as far as genetically modified organisms in agriculture are concerned: a failure to deliver on its inflated false promises. And even if it does eventually deliver, a whole host of ‘hidden costs’ (health, social, ecological, etc) will probably emerge.

And that’s not idle speculation. We need look no further than previous ‘interventions’ in food/farming under the guise of Green Revolution technologies, which did little if anything to boost overall food production (in India at least) but brought with it tremendous ecological, environment and social costs and adverse impacts on human health, highlighted by many researchers and writers, not least in Bhaskar Save’s open letter to Indian officials and the work of Vandana Shiva.

However, the Green Revolution entrenched seed and agrichemical giants in global agriculture and ensured farmers became dependent on their proprietary inputs and global supply chains. After all, value capture that was a key aim of the project.

But why should Fink care about these ‘hidden costs’, not least the health impacts?

Well, actually, he probably does – with his eye on investments in ‘healthcare’ and Big Pharma. BlackRock’s investments support and profit from industrial agriculture as well as the hidden costs.

Poor health is good for business (for example, see on the BlackRock website BlackRock on healthcare investment opportunities amid Covid-19). Scroll through BlackRock’s website and it soon becomes clear that it sees the healthcare sector as a strong long-term bet.

And for good reason. For instance, increased consumption of ultra-processed foods (UPFs) was associated with more than 10% of all-cause premature, preventable deaths in Brazil in 2019 according to a recent peer-reviewed study in the American Journal of Preventive Medicine.

The findings are significant not only for Brazil but more so for high income countries such as the US, Canada, the UK, and Australia, where UPFs account for more than half of total calorific intake. Brazilians consume far less of these products than countries with high incomes. This means the estimated impact would be even higher in richer nations.

Due to corporate influence over trade deals, governments and the WTO, transnational food retail and food processing companies continue to colonise markets around the world and push UPFs.

In Mexico, global agrifood companies have taken over food distribution channels, replacing local foods with cheap processed items. In Europe, more than half the population of the European Union is overweight or obese, with the poor especially reliant on high-calorie, poor nutrient quality food items.

Larry Fink is good at what he does – securing returns for the assets his company holds. He needs to keep expanding into or creating new markets to ensure the accumulation of capital to offset the tendency for the general rate of profit to fall. He needs to accumulate capital (wealth) to be able to reinvest it and make further profits.

And that means laying the political and legislative groundwork to facilitate this. In India, for example, the now-repealed three farm laws of 2020 would have provided huge investment opportunities for the likes of BlackRock. These three laws – imperialism in all but name – represented a capitulation to the needs of foreign agribusiness and asset managers who require access to India’s farmland.

The laws would have sounded a neoliberal death knell for India’s food sovereignty, jeopardized its food security and destroyed tens of millions of livelihoods. But what matters to global agricapital and investment firms is facilitating profit and maximising returns on investment.

This has been a key driving force behind the modern food system that sees around a billion people experiencing malnutrition in a world of food abundance. That is not by accident but by design – inherent to a system that privileges corporate profit ahead of human need.

The modern agritech/agribusiness sector uses notions of it and its products being essential to ‘feed the world’ by employing ‘amazing technology’ in an attempt to seek legitimacy. But the reality is an inherently unjust globalised food system, farmers forced out of farming or trapped on proprietary product treadmills working for corporate supply chains and the public fed GMOs, more ultra-processed products and lab-engineered food.

A system that facilitates ‘going long and going to the beach’ serves elite interests well. For vast swathes of humanity, however, economic warfare is waged on them every day courtesy of a hard-edged rock.

Renowned author Colin Todhunter specialises in development, food and agriculture. He is a Research Associate of the Centre for Research on Globalization (CRG) in Montreal.