‘We have a crisis of violence’: Oakland Police chief says city is in a ‘safety emergency’ and saw ’12 hours of nonstop chaos’ when there were seven shootings in one night after department budget is cut

By CHARLOTTE MITCHELL FOR MAILONLINE

Oakland is experiencing a ‘safety emergency’ after a wave of violence over the July 4 weekend, the city’s police chief said on Monday.

LeRonne Armstrong described ’12 hours of nonstop chaos,’ telling reporters that his department had responded to seven shootings from Sunday night to 10 a.m Monday.

‘When the yellow tape is gone and when the streets are cleaned up, there is still hurt and pain and tragedy in our community.’Dailymail.co.uk: News, Sport, Showbiz, Celebrities from Daily MailPauseNext video1:15 / 1:52SettingsFull-screenRead More

‘I hope that we can put politics aside and put public safety first,’ Armstrong said, adding that his force was ‘clearly outnumbered’ by the incidents.

The department said several people were critically injured and one killed in the shootings, which come amid a steep rise in violent crime in the Californian city.

Authorities said that none of the shootings appeared to be related and that some may have been celebratory gunfire.

The first shooting happened at 6:24 p.m. when a 29-year-old was hit multiple times while in his car.

A little over three hours later, 911 calls came in regarding a 16-year-old’s celebratory gunfire.

The department listed the weekend’s significant incidents in a lengthy press release, posted to Facebook on Monday.

At 10:00 p.m. another 29-year-old suffered multiple gunshots and less than an hour later a 45-year-old man was critically injured by gunfire on the 4200 block of International Boulevard.

At 11:49 p.m., a man who suffered blunt trauma to the head on the same block of International Boulevard died.

Around 30 minutes later, a 48-year-old was killed in a homicide and at 12:40 a.m. a female gunshot victim walked into a hospital.

Armstrong said the final victim is ‘likely not going to make it’.

‘We are facing a crisis and we are in significant need of additional resources.’

His comments followed the city’s decision to defund its police department by $17 million despite a 90 per cent increase in murders. 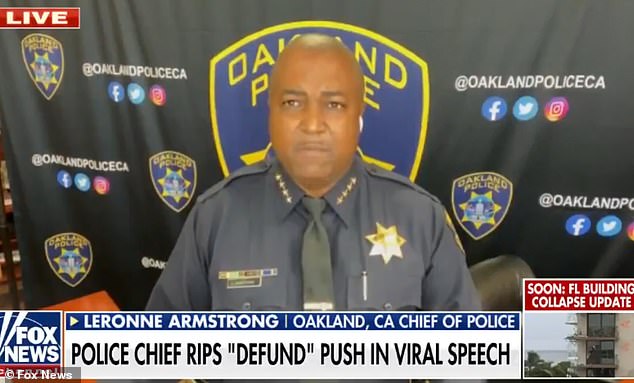 Oakland is experiencing a ‘safety emergency’ after a wave of violence over the July 4 weekend, the city’s police chief said on Monday. LeRonne Armstrong (pictured) described ’12 hours of nonstop chaos,’ telling reporters that his department had responded to seven shootings from Sunday night to 10 a.m Mondayhttps://video.foxnews.com/v/video-embed.html?video_id=6261720460001&loc=dailymail.co.uk&ref=https%3A%2F%2Fwww.dailymail.co.uk%2Fnews%2Farticle-9769357%2FOakland-Police-chief-says-city-safety-emergency-department-budget-cut.html&_xcf=
Fox News Privacy Policyhttps://www.facebook.com/plugins/post.php?href=https%3A%2F%2Fwww.facebook.com%2Foaklandpoliceca%2Fposts%2F4315711935218204&show_text=true&width=500

Several U.S. cities have been grappling with calls for police reform following the death of George Floyd last year.

Armstrong said he is ‘not opposed to any new and innovative ways of keeping our community safe’ but that Oakland had ‘a real issue of violence that law enforcement has to step in and be able to do its job and make this community safer.’

‘I think investing in violence preventions is important but it’s not going to have an immediate impact on the violence we’re experiencing day to day in the city of Oakland. We need the resources,’ he said.

‘Violence has continued to increase despite these conversations around defund and we clearly know that having less police officers is not going to equivalate a safer community.’

When asked whether residents felt safe, he responded that Oakland was ‘a tough city to be in right now’.

‘Everywhere I go in the city of Oakland, I’m often told by community members that they don’t feel safe, that they would like to see more police, that they want to feel safer in their communities.

‘They want to be able to walk in their communities and not have the fear of being victimized in any way and so I think what we’re seeing from City Hall is inconsistent with what we’re hearing directly from those impacted by violence,’ he said. 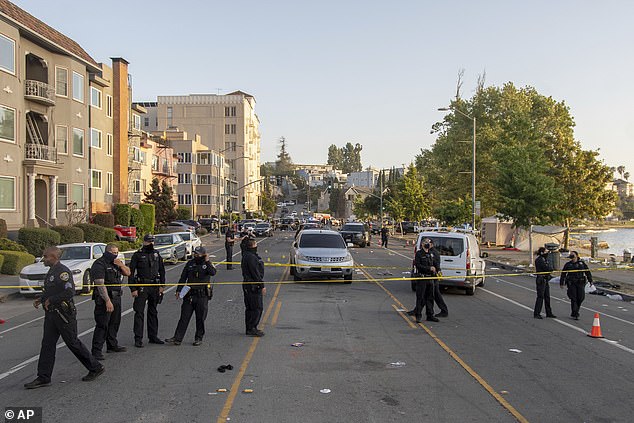 Pictured: Officers work the scene of a shooting on June 19 [File photo] 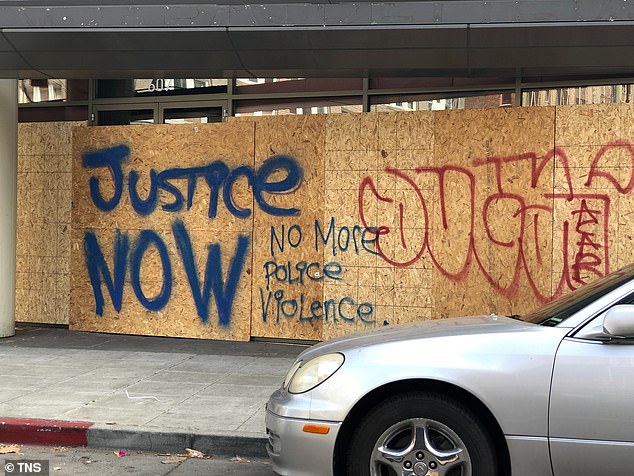 Chief Armstrong’s comments followed the city’s decision to defund its police department by $17 million despite a 90 per cent increase in murders. Several U.S. cities have been grappling with calls for police reform following the death of George Floyd last year

According to Armstrong, Oakland has recorded 67 homicides since the start of the year.

City Council Member Noel Gallo echoed Armstrong’s comments, telling KPIX 5 that the situation in the city over the weekend was ‘the worst I’ve ever seen’.

‘The reality is we need greater enforcement,’ he said, emphasizing the importance of law enforcement agencies, including the FBI, and communities working together.

Armstrong’s comments on Monday and Tuesday are just the latest time he’s spoken out against budget cuts.

Last month, he decried a decision made by city leaders in a 6-2 vote to divert a proposed $17 million increase from the Oakland Police Department’s budget over the next two years despite a rise in violent crime and shootings.

He said: ‘I’ll start off today by saying that I’m challenged by the decisions that were made on Thursday around the budget for the City of Oakland particularly for the Oakland Police Department

‘I first want to say that I believe strongly that Mayor (Libby) Shaft put forward a budget that was designed to preserve public safety for the entire city both law enforcement and violence prevention. These are not two separate things

Armstrong said that despite the cuts the department will be adding 60 officers over the next few months, but will lose 65 due to attrition and may require compulsory overtime to make up for it. Oakland police chief discusses critical lack of fundingLoaded: 0%Progress: 0%0:00PreviousPlaySkipMuteCurrent Time0:00/Duration Time5:14FullscreenNeed Text

The chief spoke as his law enforcement department’s budget was set at $674 million.

That is about $9million more than the previous year. However, the increase is drastically less than the proposed $27 million from an effort led by Democratic Mayor Libby Schaaf. And last year’s police funding accounted for 20% of the city’s budget, while this year’s budget equates to 18%, according to the Washington Examiner.

Oakland, like some other cities in the U.S., has seen a sharp rise in crime this year, with homicides and carjackings up 91 per cent and 95 per cent respectively, according to the Oakland Police Department.

Violence in the Big Apple so far this year is at its highest level since the early 2000s.

In the last year, Mayor de Blasio has vowed to slash $1 billion from the police budget despite the surging crime rate.

Meanwhile, Chicago Mayor Lori Lightfoot greeted President Joe Biden upon his arrival in the Windy City on Wednesday, holding a quick conversation with him on tarmac about the gun violence that has roiled the city.

Lightfoot told local reporters ahead of the president’s trip she planned to ask him to send in more federal aid to Chicago to combat ongoing gun violence.

The July 4th weekend saw the deadliest and most violent weekend this year in Chicago, more than 100 people were shot and 19 of them killed.

Among the wounded were at least 13 children and two Chicago police supervisors. Read more: