Battle of the Seasons

It’s almost a show business cliché that often what looks like the best of times in a career from the outside can be some of the darkest times for the entertainer.

That was the case with Rob Fusari, the New Jersey native who found himself one of the most sought-after R&B/pop producers around the turn of the century. His credits are impressive — “No No No” and “Bootylicious” for Destiny’s Child, “Wild Wild West” for Will Smith as well as co-writer and producer for five cuts on Lady Gaga’s smash debut “The Fame” album from 2008, which he co-executive produced.

Yet oddly it took the 37-year-old turning within and discovering his drag alter ego Cary NoKey to find artistic satisfaction. He’ll be in Washington next week to open the “RuPaul’s Drag Race: Battle of the Seasons” tour and filled us in by phone from Cincinnati — where the tour happened to be at the time — on how it all unfolded. His comments have been slightly edited for length.

ROB FUSARI: It was about two years ago this month, actually, and it basically came out of a dark time creatively and emotionally after the Gaga record, “The Fame.” I felt I kind of peaked my career as a producer and had this pinnacle moment so in the years following, I was searching for what my next chapter would be, where I was supposed to be creatively and as a person. I thought the move was to try and find and develop another artist but I was finding it really difficult to identify who that person might be despite the thousands of artists I was looking at. It started to become very, very frustrating. … I just couldn’t seem to get that magic going with anyone. … I eventually recorded a vocal of my own one night in the studio on my birthday. I left early and went out for a few hours and when I got back, a group of friends were listening to it and … that’s kind of when Cary NoKey started. It was just one of those moments where it felt like everything I was searching for was right there in front of me somehow but I didn’t see it because I didn’t think of myself as a performer. It started unfolding and progressing in a very natural way.

FUSARI: I grew up raised by a mom with very feminine qualities who kind of always treated me as the daughter she never had. Eventually I started to embrace that side of myself and it became almost like a car I could jump into and I just became OK with expressing my fashion sense and some other things I’d been suppressing and some things I was a little fearful of. It became this vehicle in which I found I could express myself in other ways.

BLADE: You said it was frustrating that you couldn’t find another great artist to work with but didn’t you realize a Gaga-caliber success story was maybe one in a million? How realistic was it to try to catch that kind of lightening in a bottle again?

FUSARI: No, because I’d spent a good 10 years in the business by that point and I had hundreds and hundreds of unsigned artists reaching out to me every day, so I had my pick of the litter so to speak. I said if I can’t find the next thing, nobody can. … I met some really strong ones, some really good artists but there’s something else a superstar has that nobody else has that you can’t explain it. This lightening bolt that goes through you that I just couldn’t find.

BLADE: You’ve produced A-list artists and now you’re performing yourself. What the public sees is much different, I’m sure, from what you see. What’s the biggest misconception?

FUSARI: The whole overnight sensation concept is so misleading because it’s an overnight sensation that takes years and years to get to. … I always say to artists, if you’re not willing to give up your life for this, it’s not gonna happen. There’s no in between. I don’t think people really understand the sacrifice, and it’s massive, that people make … The dingy clubs you have to play and having to be on all the time. People watch the Grammys and see the award and the parties and it’s like watching a movie. I’m here to tell you, it’s the opposite. Sure, there are those moments, of course, but what you have to give up and what you have to do to get there is everything.

BLADE: Your single is called “American Dream,” which is a rather serious song. Did you need Cary to tell that story or did she unlock some kind of artistic freedom in you?

FUSARI: Freedom comes in different ways. The freedom you get from your country comes at a very hefty price and I think we all know that, be it taxes, be it culture — it comes with a price. The freedom that drag queens and transgender people have is totally different. … They have a certain peace, a freedom and they’re living their dream that has nothing to do with what our country told us the dream was. It’s almost like we got fooled a bit with the white picket fence … which has really become the exception today. I’m not bashing the country, I love this country, but it’s built on some fallacies and weak ground that needs to be dealt with. … I felt I wasn’t living my own dream and who I am as Cary NoKey until I was able to let Rob Fusari and even Gaga go. I still get asked questions about it and that’s fine, but that chapter of my life has ended and thank God, because it wasn’t the best chapter to be honest. It might have been one of the worst.

BLADE: Where was the dissatisfaction coming from?

FUSARI: I’m not trying to bash Gaga, but sometimes the shit you have to eat to get to a certain place is not worth it. I can’t change history but I wonder now, was it worth it? It’s not about the money. I’d give the money back in a heartbeat. It’s about integrity, about character about feeling good about yourself and being part of something. The people who work with Cary NoKey, they’re going to stay on board because when the time comes and there’s success, they’ll have a reason to stay on board. You gotta treat people fairly. You gotta look to everyone who helped you along the way. I’m not going to just kick people off the roof.

BLADE: You felt Gaga did that?

BLADE: Was there any talk of working with her on her follow-up?

BLADE: What would you say to her if you were with her in an elevator today?

BLADE: You did a track with Whitney Houston. Did you work it up then send it to her people or were you in the studio together with her?

FUSARI: No, we cut the vocal together in the studio for “Love That Man.” (from the 2002 “Just Whitney” album)

FUSARI: To be honest, it wasn’t the best. She wasn’t sober so it was difficult at times. She was battling addiction and she was with Bobby, who was just a nightmare.

BLADE: How did it come about that you are on the “Drag Race” tour?

FUSARI: We were playing out in (New York) a lot and it ended up that we had landed the spot opening for Adore Delano at the Gramercy Theatre. We were thrilled. I love the Gramercy and Adore and we were just thrilled. It was a great fit. All the “Drag Race” folks were there and the executives and creative folks and they asked if we were interested in joining the tour next year, so we said yes. A lot of times things like this are said and it doesn’t come to fruition, it’s just part of the business, but we just finished the Macy Gray tour and right after that, we were ready and it just worked out.

FUSARI: It’s a blast, I’m so happy. They’re so nice and so classy. They’re pros. You’d think it would be a lot of backstage mayhem and chaos and drama on the bus and so on, but it’s actually really the opposite. Everybody’s really on their game and really pro. I’m really impressed.

BLADE: Do you feel like an outsider since they’re all vets of the show?

FUSARI: It’s weird, I don’t. They’ve accepted me and we definitely hit it off.

BLADE: Are you a gay man who does drag? How do you identify?

FUSARI: It goes so many different ways. It goes sideways, it goes inside out, it changes from day to day and I explore all different sides of it. That’s really the only way I can explain it. Do I want to go full drag tomorrow? Of course, I would do it. Do I want to have a sex change? No, it’s not something I’m looking to do. If somebody wanted to call me a cross dresser, I don’t think I am but you could probably say that about me and I don’t have a problem with it. … The wires just all cross for me in so many different directions.

BLADE: What do you actually do in the show?

FUSARI: It’s basically a way to open the show with something different. It’s more serious, though it can be playful at times. … We keep it simple. I do about a 20-minute set and sing about seven songs and I have a dancer with me. We do some covers but in a very Cary NoKey kind of way. … I do (Gaga hit) “Paparazzi” because it’s a song I wrote and I’m proud of but people get to hear it in more of its original version. Some of it’s very aggressive, almost like Kurt Cobain, but then it’s also kind of Joel Grey-“Cabaret” too. It spans a lot. … I know it’s hard to sit through 20 minutes of new music you don’t know, so we mix it up. 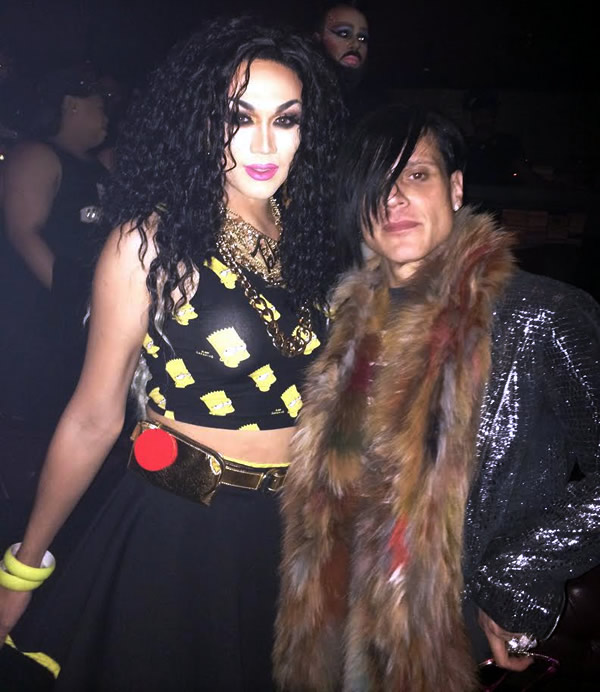 Joey DiGuglielmo is the Features Editor for the Washington Blade.

In more people-stealing-credit-from-Lady-Gaga news, Yana Morgana claims that her now-deceased daughter, Lina Morgana, shaped Gaga into the superstar she is today. She is seeking rights to release songs the pair recorded before 19-year-old Lina committed suicide.

Lina’s ex-manager says Gaga did write some of the musician’s songs, and they recorded 12 more together that were not released. Morgana accuses Gaga of stealing her daughter’s “fashion style, performance techniques and dramatic stagecraft,” according to NYPost.com. She also told the paper that Gaga assumed her daughter’s dark side, saying: “[Gaga] talks about having a dark and tragic life, but she had everything she wanted in the world. She went to [the same] high school as Nicky Hilton; her parents were rich. But Lina did have a tough life.” Gaga hit the national stage a month after Lina died.

I’ve reached out to Gaga’s publicist for comment. (UPDATE: On Friday, Gaga remains silent after continued requests.) Forbes estimates the pop sensation earned $62 million from June 2009 to June 2010, and it’s not the first time others have tried to cut in on her success. Ex-boyfriend and producer Rob Fusari sued the artist earlier this year for $30 million, saying he discovered her. She counter sued in March.

The Morgana accusation comes after a recent Vogue cover of Lady Gaga covered in raw meat. As gimmicky as she may be, you just have to give her credit for constant headline-making.