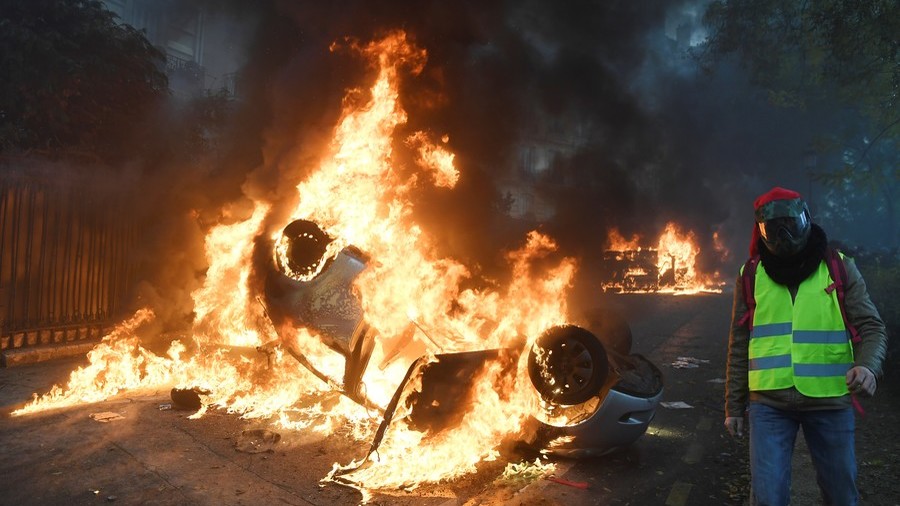 A demonstrator walks near a burning car during a protest of Yellow vests in Paris on December 1, 2018. ©  AFP / Alain Jocard

Police have deployed tear gas and water cannons against firecracker-hurling Yellow Vest protesters in Paris. Some 260 arrests have been made and 92 people injured amid the mayhem, triggered by fuel price hikes and high taxes.

December 1 rallies are being held with the slogan “on the way to Macron’s resignation.” As the unrest gained momentum, the area close to the iconic Champs-Elysees avenue has been covered by thick smoke.

While pelting law enforcement with various projectiles, protesters have also resorted to symbolic yellow paint during the standoff. To their delight, quite a few shots have landed on the shields of riot police. 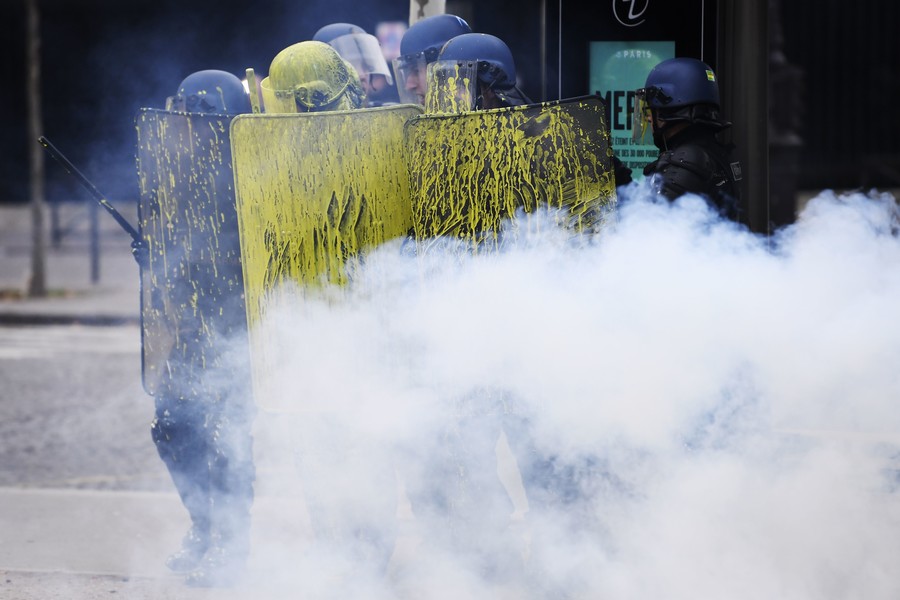 Adding more symbolism to the rally, a man was seen on his knees with arms stretched to both sides in front of the city’s key landmark – Arc de Triomphe. Another demonstrator stands right behind him, holding two French flags, while both are facing a line of officers in full riot gear.

As some of the Yellow Vest supporters lined up next to the site, police unleashed a water cannon, knocking down at least two of them, who were carried away.

Surrounded by smoke both from firecrackers and tear gas, a group of Yellow Vest protesters grabbed dozens of large pieces of plywood to use as a massive ‘shield wall’ against police. 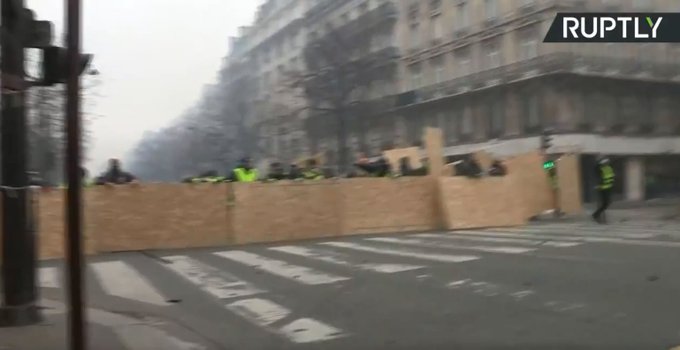 33 people are talking about this

Some Yellow Vests say police were eager to disperse them even before the clashes broke out. “We arrived in the morning and we’ve been tear gassed right away. We didn’t even do anything,” a protester told RT. 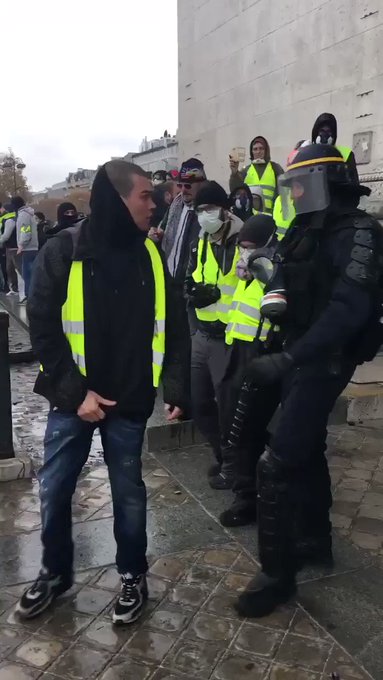 189 people are talking about this

Another demonstrator who came to Paris from Reims said there’s no standoff there.

“In [the regions], police officers come to us for a talk and a cup of coffee, the atmosphere is very amicable in general,” he said. “And what happens here – it’s outright mayhem, and it’s very sad…We’re supported by many people, and not only in Paris.” 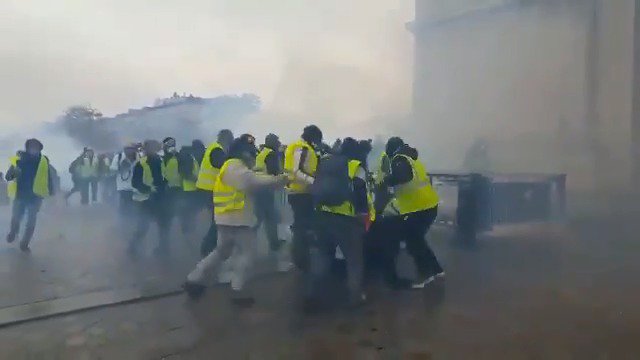 256 people are talking about this

Meanwhile, Lucas Leger, and another RT France reporter covering the rally, have been injured by a tear gas canister and a flash-ball gun. Leger posted a selfie with a bleeding cheek on Twitter. 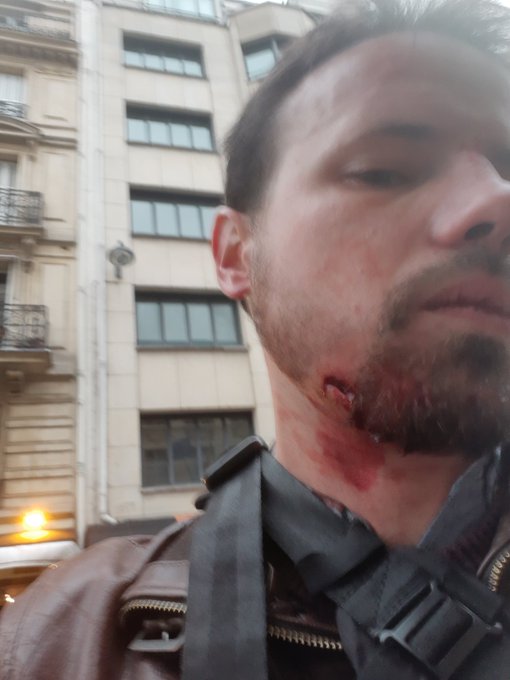 2,013 people are talking about this

RT reporter Peter Oliver was also injured by a rubber bullet on Saturday.

Videos from the unrest also showed people grasping their legs, presumably injured by the very projectiles.

Hours into the clashes, Interior Minister Christophe Castaner tweeted that at least 1,500 “disruptors” were on the outskirts of the Champs-Elysees. According to police figures, 92 people, including 14 security officers, were injured and 263 arrested in the Paris chaos. About 75,000 people showed up for the Yellow Vest protests held all across France on Saturday.

On Friday, negotiations to settle the issue failed after only two of the protesters’ representatives turned up for a meeting with Prime Minister Edouard Philippe. One of them walked out after he was told he could not have TV cameras covering the negotiations. A recent poll shows that despite the mayhem, two-thirds of people in France still back the Yellow Vest cause. 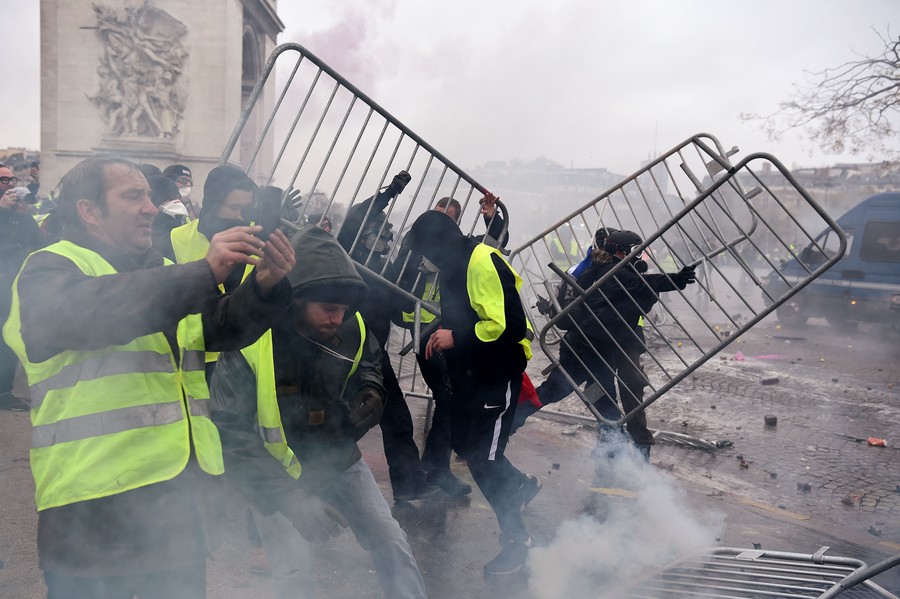 The movement has also inspired rallies in neighboring Belgium, where protesters on Friday called on the prime minister to resign. A standoff there also ended up in clashes with law enforcement.

My Comment:  Feature picture is of newly deceased illuminati puppet H.W. Bush.  The illuminati are at least 13 Satanic coven families which include Bush family and British Monarchy of Saxe-Coburg-Gotha bloodline which is Khazarian-Zionist crown usurpers.  Macron is married to the Rothschilds and they are the pinnacle of the illuminati along with the British Monarchy and these people along with City of London, Vatican, and Washington, D.C. comprise illuminati power holders and push for and profit from coming  WW3.