A senior Turkish journalist has revealed bits from a secret audio tape that was allegedly recorded from the brutal assassination of dissident journalist Jamal Khashoggi at the Saudi consulate in Istanbul, saying the slain man begged for his life before he died at the hand of killers.

Nazif Karaman, head of investigation department at the Daily Sabah, a Turkish newspaper, said Saturday that people who killed Khashoggi put a bag on his head to strangle and suffocate him.

“I’m choking, put this bag away from my head, I’m scared of claustrophobia,” Khashoggi said before he died, according to Karaman who shared the information with the Qatari-based news channel Al Jazeera. 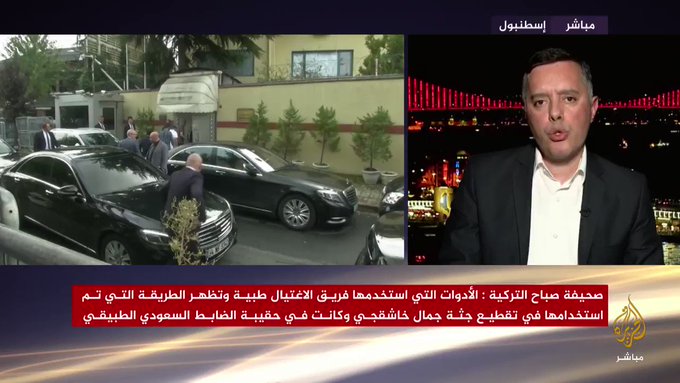 131 people are talking about this

Karaman based his account of the brutal killing on an audio tape that Turkish authorities say can prove Khashogi’s assassination in the Consulate on October 2 was pre-mediated. Turkish president Recep Tayyip Erdogan said Saturday that Ankara had shared the audio with Saudi officials as well as intelligence services from four Western countries.

President Erdogan said the recordings were given to Saudi Arabia, the US, the Germans, the French, and the English.

In his interview with the Al Jazeera, Karaman, who is believed to be close to the Turkish government, said the strangulation of Khashoggi lasted for seven minutes.

He also cited information from Turkish intelligence officials, saying that the 15-member Saudi hit squad that had traveled to Istanbul to kill Khashoggi in the kingdom’s consulate spent 15 minutes to dismember Khashoggi’s body after he was killed.

The killers, he said, stretched plastic bags in the room where Khashoggi was murdered to prevent his blood from spreading on the floor. Salah al-Tabiki, a member of the team that had been introduced in media reports as a forensic expert, then chopped Khashoggi’s body into five parts to allow other people to stuff them in five large bags. The bags were then transferred to a car belonging to the Consulate to transport them to the outside of the diplomatic mission.

Karaman did not elaborate on how the Saudi assassination team managed to dispose of Khashoggi’s body, a question that remains unsolved in Turkey’s investigation. He said, however, that the Saudi team had traveled to Turkey with some special “tools and equipment”, adding that the pictures and details of the gadgets will be published by Daily Sabah in the coming days.

The journalist said the Turkish newspaper is also planning to release details of the audio recording from Khashoggi’s assassination to shed more light on how the journalist was killed in the Saudi Consulate.