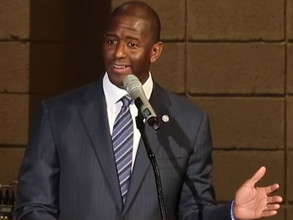 Gillum: “We Are Not Going To Be Hushed, We Are Not Going To Be Sat Aside”
By Ian Schwartz
Real Clear Politics
November 13, 2018
Tallahassee mayor and Democratic candidate for governor Andrew Gillum spoke at a largely African-American church Sunday, warning against vote suppression as Florida’s Governor and Senator elections go to a recount.

Gillum also defended controversial Broward County Elections Supervisor Brenda Snipes in a campaign-style speech at the church. The Democratic candidate implied Snipes, initially an appointee by then-Gov. Jeb Bush, is receiving criticism because she is an African-American woman.