After a nuclear holocaust, we’ll go to heaven as martyrs; those who nuked us will go to hell – Putin 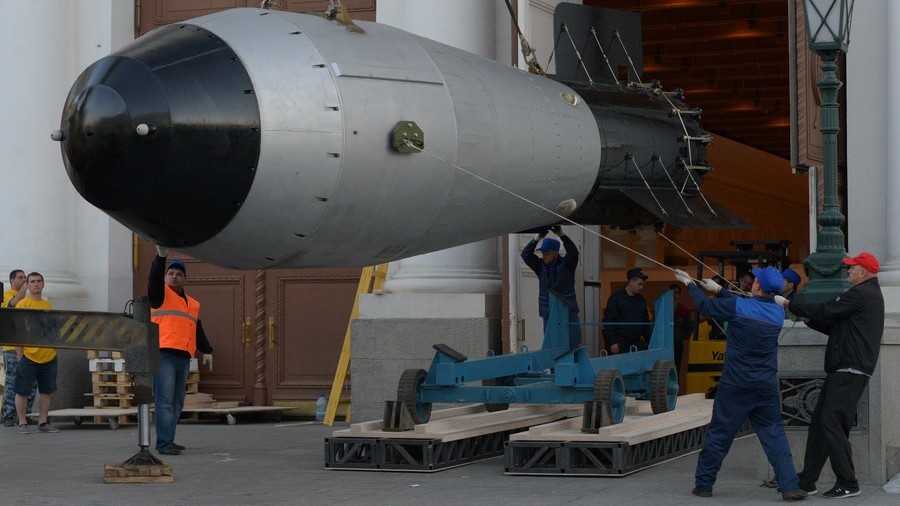 A mock-up of the “Tsar-bomba” (RDS-220) a 100-megaton yield thermonuclear device tested by Soviet Union in 1961, the most powerful ever created. © Mikhail Voskresensky/Sputnik
If any nation decides to attack Russia with nuclear weapons, it may end life on Earth; but unlike the aggressors, the Russians are sure to go to heaven, President Vladimir Putin has said.

“Any aggressor should know that retribution will be inevitable and he will be destroyed. And since we will be the victims of his aggression, we will be going to heaven as martyrs. They will simply drop dead, won’t even have time to repent,” Putin said during a session of the Valdai Club in Sochi.

He added that Russia’s nuclear forces are not tailored for a pre-emptive strike, and exist as a second-strike capability meant to deter an attack by a foreign nation.

The Russian nuclear doctrine allows for the use of this weapon in a conventional conflict, but only if Russia’s existence is at stake. This presumably gives the Russian military a loophole to use tactical nuclear weapons in the case of a large-scale invasion. The self-imposed restrictions are less harsh than a complete ‘no-first-use’ pledge, which was dropped by Moscow in 1993.

The US’ latest nuclear posture review says that Washington may use nuclear weapons in response to a non-nuclear attack on itself or its allies. It remains vague about the exact circumstances that may trigger such an action. This gave rise to speculation that even a cyberattack may permit a nuclear response. Meanwhile, a call for the creation of small-yield submarine-launched missiles and nuclear-capable sea-launched cruise missiles have only added to concerns that the US is stocking up for some kind of large-scale conflict.