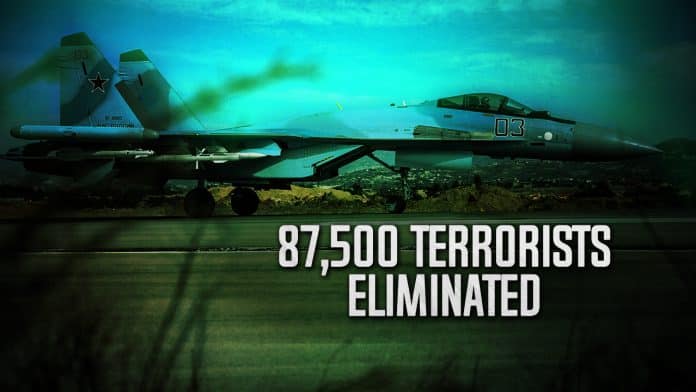 On October 20th, Russian Defense Minister Sergei Shoigu said that Russian Aerospace Defense Forces have carried out more than 40,000 flights, including 21,000 nighttime ones over the course of the operation in Syria. These have resulted in approximately 122,000 strikes on terrorist facilities. Furthermore, about 87,500 terrorists were eliminated and over 1,411 settlements were liberated as a result of the operations.

More than 2,500 settlements have joined the reconciliation process as a result of the Russian reconciliation center’s efforts. According to Shoigu special attention is being paid to resolving humanitarian issues.

On the same day, after long negotiations and as a result of the siege on al-Safa, Syrian authorities freed six hostages, all of whom were abducted by ISIS during an attack in July. The governor the Sweida region Amer al-Ashi said that numerous terrorists were killed in the operation that lasted more than 83 days, following the ISIS attack.

Syrian state news agency Sana also on October 20th reported that US-led international coalition killed at least 62 civilians in three new airstrikes on the villages al-Suseh and al-Bubadran in al-Bukmal region in Deir Ezzor. Out of the victims, 15, mostly children and women were killed in al-Suseh. 37 civilians were killed in an airstrike on the Othman bin Affan mosque in the eastern Deir Ezzor province. The final 10 were killed after an airstrike on the Ammar bin Yasser mosque in the village of al-Boubadran. According to local sources there were many wounded, claiming that the death toll might rise due to numerous serious injuries.

In the Euphrates Valley, the remaining ISIS militants launched more attacks on Syrian Democratic Forces (SDF). Five suicide vehicle-borne improvised explosive devices and dozens of fighters of the terrorist group attacked positions of the SDF north of the town of al-Baghuz al-Fawqani. The US-backed forces destroyed the vehicles and recaptured a position they had previously controlled. The SDF media center claimed that more than 31 ISIS fighters were killed in the clashes.

The Russian Center for Reconciliation of Opposing Sides reported that the ceasefire was violated by unknown assailants who shelled several government-held areas in the Aleppo and Latakia governorates on October 19th. Militants are constantly violating the ceasefire in apparent attempts to sabotage the Russian-Turkish brokered deal. Earlier, the timeline of the demilitarized zone implementation was extended in an attempt to salvage it. Nonetheless, there are still significant problems with forcing radical militant groups to respect the ceasefire.

Finally, new satellite images released on October 20th showed that Russian forces are constructing 18 hardened aircraft shelters in the Hmeimim airbase in Lattakia. A local Syrian source reported that the construction of the shelters began more than a month ago. The images also show that the air base currently holds nine Su-24, four Su-34, four Su-35 warplanes. It also contains several reconnaissance and patrol aircraft.