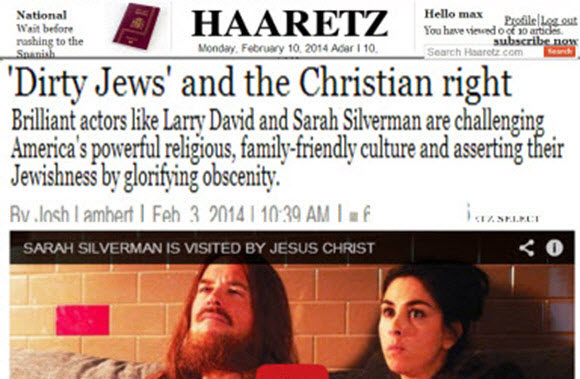 The first is one of the leading Jewish newspapers in Israel, Haaretz. The article is written by a Jewishwriter Josh Lambert who wrote a book that boasts of the Jewish role in pornography in the Western World.

In my recently published book, “Unclean Lips: Obscenity, Jews, and American Culture,” I explain why, beginning in the late 19th century, American Jews have found the explicit representation of sex, and four-letter words, so very useful. The answers vary: Some Jews use obscenity to fight anti-Semitism…

These Christian campaigns against obscenity – and the vague, recrudescent sense promoted by Scalia’s remark that the people using obscenity are not sufficiently Christian or authentically American – may help to explain why, in a media environment in which the representation of sex and the use of taboo language smacks increasingly of banality, brilliantperformers like David and Silverman continue not only to assert their Jewishness emphatically, in virtually every one of their performances, but also to glory in and glorify the use of such language. Especially because the Christian right goes to such great lengths to demonstrate that Jews should not feel excluded from its initiatives – who loves Jews nowadays more than the Christian right, right? – identifying oneself as a “dirty Jew” in 21st-century America is one way to signal your opposition not just to the banalities of the market-driven family-friendly culture, but also to the nation’s most powerful socially, religiously and politically reactionary movement.

Prof. Nathan Abrams is a Jewish Professor of American History at Aberdeen University in UK.  He boasts that Jews are the driving force behind the worldwide modern pornographic industry and that their motivation is in part to destroy Gentile morals.

The following is an excerpt from one of the new additions to my book, Jewish Supremacism. It offers more powerful evidence that reveals the Jewish extremist war against Gentiles, a struggle that we Gentiles are not even allowed to know about, much less resist. Jewish Supremacism is available at www.davidduke.com

From the latest Edition of Jewish Supremacism by David Duke

After learning about the inordinate Jewish involvement in organized crime, historical slavery and modern white slavery, it did not surprise me when I began to learn of their domination of pornography. Just as Jewish scholars faithfully recorded the Jewish domination of the African slave trade so they have also documented their prominent role in pornography.

In a respected and scholarly magazine of Jewish intellectuals, (The Jewish Quarterly, winter 2004) Jewish professor Nathan Abrams in an article titled, “Triple Exthnics,” proudly documents the leading role of Gentile-hating Jews in pornography.

A story little told is that of Jews in Hollywood’s seedier cousin, the adult film industry. Perhaps we’d prefer that the ‘triple exthnics’ didn’t exist, but there’s no getting away from the fact that secular Jews played (and still continue to play) a disproportionate role throughout the adult film industry in America. Jewish involvement in pornography has a long history in the United States, as Jews h

Abrams shows how the corruption and debasement of Gentiles and Christian morality is a primary part of their motivation for intentionally infecting the Gentile community with pornography.

Pornography thus becomes a way of defiling Christian culture and, as it penetrates to the very heart of the American mainstream (and is no doubt consumed by those very same WASPs), its subversive character becomes more charged. … Extending the subversive thesis, Jewish involvement in the X-rated industry can be seen as a proverbial two fingers to the entire WASP establishment in America. …

Opposition to Jewish extremist subversion of Gentile, Christian or Muslim morality is frequently defined as anti-Semitic “hatred” in the Jewish dominated media. Abrams writing in a Jewish journal for a presumably Jewish audience writes matter-of-factly about the “atavistic hatred” against us by Jewish pornographers and their motivation to “weaken the dominant culture in America by moral subversion.”

Obviously, there are no articles in the mainstream media exposing Jewish “atavistic hatred” against Gentiles by the promoters of pornographic depravity. Abrams even goes on to talk about the roots of this revolutionary Jewish attack on European values.

Notice that all those mentioned: Reich, Marcuse, Goodman, Marx, Trotsky, Lenin and Freud are Jews. From Freud to Goodman, all represent a Jewish revolution against traditional European values and morality.

When sick Jewish pornographers are part of the brutality of Jewish organized crime, the results can obviously be horrifically tragic for our people. In 2000, a Jewish “Russian” organized crime ring was uncovered that specialized in kidnapping Russian children, some as young as two years old, from parks and orphanages and then subjecting them to rape, torture and murder, all on video tape. These tapes were sold to thousands of Jewish and Gentile perverts all over the world. When police in Italy were frustrated by lack of action by the authorities they released some of the video footage to an Italian network which then showed some of the graphic images hoping to cause public outrage. Instead of outrage against the Jewish murderers the TV producers suffered outrage for showing the disturbing images.

In spite of the horror and obvious newsworthiness of this international Jewish child porn/murder operation, it received little coverage in the media in the United States. When Seth Bekenstein, the ring’s American distributor was arrested, there was little publicity, and in spite of being a part of one of the most horrific criminal activities imaginable, he was sentenced to only 18 months on guilty plea.

The Jewish war against Western Christian Civilization and the European peoples is also a war against all humanity, as their degenerate and destructive values now permeate the entire world and and are destroying millions of lives each and every year.

It is time to stand up to them