US is a DECLINING Power With Little to Offer

A Russian-American Alliance vs China Is an Absurd Proposition. The US Is a Declining Power With Little to Offer

However debatable such an approach may be, there is no denial that this proverbial G(t), that is geopolitical potential is quantifiable and here is an interesting piece of analysis by former Indian diplomat M. K. Bhadrakumar, who in his piece US-Russia-China triangle in flux, again comes to some interesting conclusions and provides some valuable insights. He starts with giving a trivial and unimaginative Kissinger “triangulation” of 1970s some treatment, not forgetting to mention earlier Eisenhower’s triangulation of 1950s:

Kissinger argued that the United States, which sought to profit from the enmity between Moscow and Beijing in the Cold War era, would therefore need “to play this balance-of-power game totally unemotionally. Right now, we need the Chinese to correct the Russians and to discipline the Russians.” But in the future, it would be the other way around….Now, this recapitulation is useful today, because Trump’s moves so far are indicative of an agenda to revert to the Eisenhower era – containment of China by forging an alliance with Russia.

As I stated not for once, American geopolitical “theory” is highly unimaginative and rigid. Its main fallacy is an assumption that the US is eternal and ever omnipotent—both being very false notions. It was inevitable in the scholarship represented by such “academe” as Brzezinski or Fukuyama, in general, and a collection of raging Russophobes in relation to Russia in particular. Kissinger may think that US can continue to play this geopolitical triangle or that this triangulation is useful today—an idea Kissinger exercises now—but the reality is much more complex and it is not anymore about this proverbial, and largely obsolete, US-Russia-China triangle. The reasons (some of them) it is obsolete is because:

1. NO meaningful “alliance” (or whatever other tired term could be used here) between Russia and US is possible today in principle. It is partially due to Russia’s increasing G(t) and S(t) with the same diminishing for the US. And, because Russia knows the score in this dyadic relations. US simply cannot afford to “buy” Russia. It could in 1990s, it failed due to hubris and delusion. The question today is if the US will be able to pull itself by the shoelaces from the swamp she is in.

2. Both Russia and China are the key parts of Eurasia and it is not about just Russian-Chinese relations—it is about new Eurasian economic and security configuration in which the US is viewed as merely another power which needs to be prevented from interfering into the Eurasian affairs. Indeed, India is in play, so is Iran and so is…drum roll—Europe. But there is some worry on China’s part and it is understandable:

The government-owned China Daily carried an editorial – Has the meeting in Helsinki reset US-Russia relations? – where it estimates that at best, “Helsinki summit represents a good beginning for better relations between the US and Russia.” Notably, however, the editorial is pessimistic about any real US-Russia breakthrough, including on Syria, the topic that Putin singled out as a test case of the efficacy of Russian-American cooperation.

This unease can be explained in the next passage:

On the other hand, the Chinese Communist Party tabloid Global Times featured an editorial giving a stunning analysis of what has prompted Trump to pay such attention (“respect”) to Russia — China can learn from Trump’s respect for Russia. It concludes that the only conceivable reason could be that although Russia is not an economic power, it has retained influence on the global stage due to military power:

“Trump has repeatedly stressed that Russia and the US are the two biggest nuclear powers in the world, with their combined nuclear arsenal accounting for 90 percent of world’s total, and thus the US must live in peace with Russia. On US-Russia relations, Trump is clearheaded.”

On the contrary, if the US is piling pressure on China today, it is because China, although an economic giant, is still a weak military power.

And here is the issue for China and people who formulate strategies there—using mere the size of GDP or the size of nuclear arsenal is not sufficient enough to become really strong military power, that is to gain this main component which plays the most important role in this G(t)–XM. Here I may go on a tangent and recall a very interesting example from the world so completely removed from military that is may seem almost irrelevant—yet, it is very germane to such a discussion.

About 10-11 years ago two of the greatest jazz and fusion guitar players of generation, Alan Holdsworth and John McLaughlin, had a friendly discussion on the pages of one of the guitar magazines in which they concluded, rightly so, that no matter how good one is in using sustain on their electric guitar, together with other possibilities sound processing affords an electric guitar player, it only matters if you can play acoustic, completely unplugged—that is the real measure of one’s ability. Absolutely the same applies to military power—one is either a great conventional military power or, once a serious look is taken both at the nature of a military conflict and evolution of military technology, is a mere static observer of a great global power game in which conventional capability becomes a decisive factor. In this, Mr. Bhadrakumar’s final conclusion is wrong:

Indeed, if the crunch time comes, China will be on its own within the Kissingerian triangle. And China needs to prepare for such an eventuality. On the other hand, China’s surge to create a vast nuclear arsenal could make a mockery of the grand notions in Moscow and Washington that they are the only adults in the room in keeping the global strategic balance.

China is (relatively) weak militarily NOT because she doesn’t have enough nuclear weapons—this could relatively fast, with Chinese financial wherewithal, be addressed.Chinese relative military weakness comes from a huge technological, cultural and organizational issues of her conventional capability, which, despite its polished outward appearance, is nowhere near with that of the United States or Russia. It is technology—always was, always will be. It is also an operational experience and the way conventional forces are deployed, which matters great deal—China has no real operational experience here.

There are reasons to believe that some technological gaps will never be closed—China continues to struggle mightily in aviation, submarine, space technology and other key technological and operational concepts.

Moreover, one has to answer the questions of why China needs to prepare for any “Kissingerian” eventuality and what is this “grand notion” in Moscow? All signs from Moscow are unequivocal in their confirmation of Moscow’ commitment to Eurasian economic integration and maintaining the peace—this is impossible without China.

But, paradoxically, the main answer lies within new Russian geopolitical posture, which in today’s parlance could be characterized as a pragmatic egoism and in this new Russia’s vision of herself China is by far more important, both as an energy and military technology market, than the United States will ever be.

Russians finally learned a very healthy cynicism when it comes to Russian interests and in relation with China will continue to observe the dynamics of mutual trade—unlike the US, China does have means to “buy” Russia geopolitically, granted, of course, on Russia’s conditions and Russia doesn’t mind having China’s strategic back. China knows it. This immortal principle “you scratch my back—I scratch yours” applies to Russian-Chinese relations completely, while it doesn’t work and will not work in US-Russian relations, thus killing any vain discussion on some “triangle”.

Indeed, why break a good thing with mutual scratching? Especially when at stake is a new brave world where at least some semblance of balance and real order will be restored. As I stated not for once, the times of an alcoholic low life and cabal of thieves in Kremlin are over—good that at least this idea started to dawn on someone in Washington. Maybe someone is getting, finally, situationally aware there. As they say—better late than never.

Source: Reminiscence of the Future 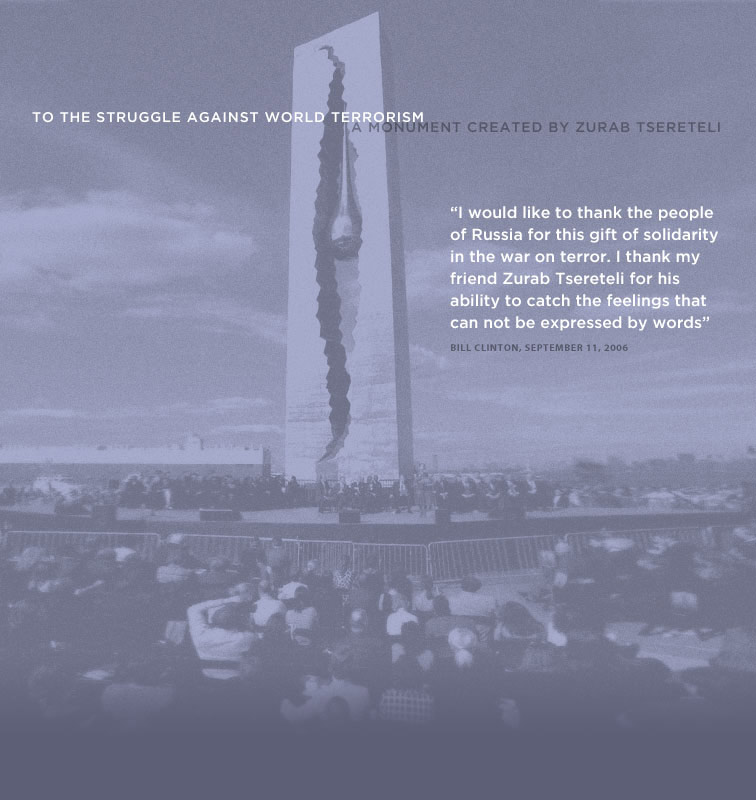 My Comment:  The teardrop memorial was Russia’s 911 Gift to America which our politicians elected to put in New Jersey.  How insulting!