Ryan Bundy For Nevada Governor-He Will Support Your Rights As a Citizen! Fighting the Deep State! 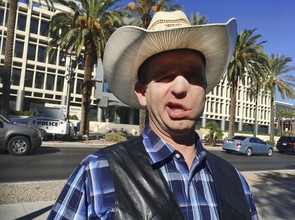 Ryan Bundy Nevada governor bid emphasizes states’ rights
By Valerie Richardson
The Washington Times
August 28, 2018
Ryan Bundy’s run for Nevada governor is surprising only because he was supposed to be either dead or in federal prison by now.

Instead, the 46-year-old son of rancher Cliven Bundy is making his pitch as an unaffiliated candidate to “take Nevada back,” bringing his family’s decades-old fight against federal land management to the voters in the Bundy saga’s latest stranger-than-fiction twist.