Russian cartoons are a treasure of unique, visually appealing, wholesome and so morally sound ideas and lessons

This article originally appeared on a new site about the Christian renaissance in Russia, called Russian Faith. Their introductory video is at end of this article.

Editor’s note: Those who are interested in the cartoons mentioned below- and others of the sort that have never before been translated into English – in our Ditch Disney section. You can also find exclusive examples of great contemporary Russian TV shows here.

Generally Russians produce cartoons and animated films so wholesome that it makes you want adopt kittens, one fan told FWM. “It makes you stare at photos of baby animals for hours on end.”

But can it also help you learn about Christian faith? The answer is a resounding “yes”. Through the power of cartoons, the most accessible form of visual language, Christian values are transmitted, unlike the messaging contained in many Disney cartoons. Disney Channel made “history” in 2014 too when its original series Good Luck Charlie featured a little girl with “two mommies”.

In addition to Seraphima’s Extraordinary Adventures — a full-length animated Christian movie — there are more must-see Russian films with English subtitles, including Your Own Cross, This is My Choice, The Battle of Kulikovo and St. Seraphim of Sarov, the Miracle Worker.

The Battle of Kulikovo is especially relevant today in the era of ISIS. There is an enormous body of literature devoted to the battle at Kulikovo Field, one of the most significant events of Russian military history in the medieval period in which a coalition of Russian princes defeated the Horde in 1380.

Already in times of Prince Oleg (879-912) Russia was included into the European family. The Rurik dynasty had entered into kinship with ruling dynasties of German and Byzantian Christian empires.

Byzantines considered Russians as Francs because of their West European origin. The social structure of Russia at that time was completely identical to a political system of the states which have developed from splinters of Franks empire at second half of X century. Russian warriors have taken part in liberating of the Holy Land together with European knights.

Viewed today, ironically even the overwhelming amount of Soviet era cartoons were highly moral in what they taught, even though they were produced in a godless society, hinting at a Russian peculiarity. Russia has produced some amazing animations. In fact, Russian animation is so noteworthy that there has been a Wikipedia page dedicated to its storied history.

Notably, Animaccord Animation Studio in Moscow, has had great success with its children’s folk-tale series Masha and the Bear (2009–present). The emphasis on pantomime has kept audiences world wide enthralled. The show’s main characters are Masha — a green-eyed, blonde-haired little girl with a penchant for mischief — and her friend the bear a retired circus performer Mishka, who does his best to keep her out of trouble.

The series became the most popular cartoon ever in Italy, and the episode “Masha + the Porridge” gathered more than a billion views on YouTube, making it the most watched animated series online.

Another long running, educational, children’s series by Melnitsa Animation Studio called Luntik has aired since September 1, 2006. Luntik explores life on our planet and learns how to communicate with other creatures, such as insects, fish and frogs. Seven seasons and more than 400 episodes have been produced since the show was launched.

Aired from May 7, 2004 until 2012, and produced by Petersburg Animation Studio with assistance from the Ministry of Culture of the Russian Federation, was another animation hit called Kikoriki. “We love the world of Kikoriki,” US Vice-President of Acquisitions at Shout! Factory Jordan Fields said in a statement about the Russian favourite. “Legend of the Golden Dragon and Team Invincible are two highly entertaining comedies with truly nutty characters, clever storytelling, gentle satire and rich animation.” 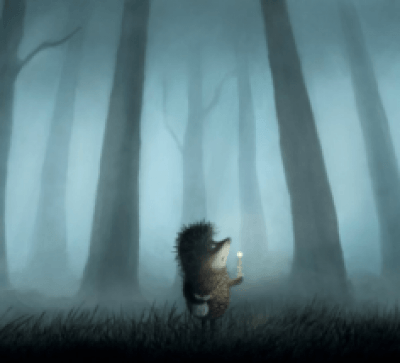 Famous series ‘Hedgehog in the Fog’

Famous Japanese film director Hayao Miyazaki, who created such anime masterpieces as My Neighbor Totoro, Spirited Away and Howl’s Moving Castle, named Hedgehog in the Fog (1975) his favorite work. It was created by one of the most famous Russian animators, Yuriy Norshteyn. His films have won numerous awards at international festivals.It is considered a classic in the world of animation. At first glance a simple tale of a young hedgehog’s journey through the fog to meet his friend, this visually innovative stop-motion film is also a subtle meditation on the nature of human life in the great Russian tradition.