Russia Is Preparing for a ‘Perfect Storm’ in the Global Economy

In recent months Russia, as some claim, “strenuously prepared for Putin’s meeting with Trump”.  What does this mean?

Firstly, in April the Central Bank of the Russian Federation dumped nearly a half of US Treasuries that it had on its balance sheet, reducing their stock from $96.2 billion to $48.7 billion.

In May the Central Bank continued to do this, having reduced the quantity of treasuries on its balance sheet even more.

Certain news agencies only emphasized that Russia dropped out of the list of the largest holders of treasuries, having noted that this “is less than $30 billion”. They use students in these news agencies, and as a result such “news” appears.

Having read the full report of US Department of the Treasury, it is easy to see that the size of the Russian investments in treasuries was reduced to $14.9 billion.

I.e., more than sixfold in two months. But there still isn’t any data for June…

Secondly, some observers noticed that against this background the Central Bank of the Russian Federation continued to increase its gold reserves.

Since the Central Bank shows in its report the amount of gold in the dollar equivalent, we will have to convert it at the rate of the corresponding number.

As we see, the amount of gold indeed steadily grows. 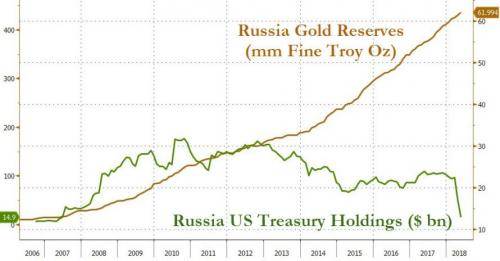 Some were stupid enough to be indignant because the Central Bank buys gold while it goes down in price. On the one hand, if it bought it at the top peak of the price, then it would be worse. On the other hand, it is possible to assume that in the near future certain events are expected that can significantly raise the price of gold.

If we work like system analysts, then we need to coordinate at least two more facts with the aforementioned. 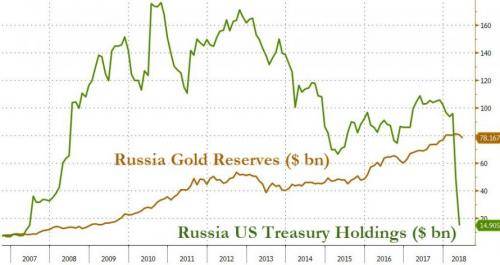 Thirdly, the majority of Russian state corporations and a number of banks and companies with State capital switched (or are in the process of switching) to the Russian System for the transfer of financial messages of the Bank of Russia (SPFS), which actually means abandoning SWIFT.

Very recently, in June, “Gazprom Neft” also tested a transition to SPFS. As was stated in the press release:

“The use of a sole system that all Russian credit organisations are connected to instead of many local bank clients allows to considerably increase the speed, reliability, and security of carrying out financial operations and to optimise expenses”.

And fourthly, the head of “VTB” Andrey Kostin met with Putin the other day and presented to him a report on the activity of the bank. During the meeting Kostin, in particular, said two things:

“1. Since the beginning of this year, people seem to be less interested in making dollar deposits or taking out dollar loans, compared to ruble-denominated deposits and loans. We believe this to be an important step towards the de-dollarisation of the Russian finance sector.

2. VTB experts have drafted a package of proposals designed to further promote the ruble in international settlements and thus develop the Russian market for floating Eurobonds, shares and creating other derivatives that are now used only in the West. I think that we need to create our own financial tools. This would serve as an additional safeguard for the Russian financial sector against external shocks, and would give a new impetus to its development”.

As we can see, both State corporations, and State banks are actively preparing for the de-dollarisation of economy (or, if to be more exact, carrying it out with confidence) and possible problems from SWIFT, and also increase the self-sufficiency of all systems (communication, payment, and so on).

I think that if there is the desire, then it is possible to significantly add to the provided list of measures. Russia consistently and surely dumps the dollar (and, quite possibly, prepares for the “perfect storm” in the global economy that was predicted long ago), and today none of Trump’s words or actions can change these aspirations.

Because no Trump is able to stop the impending storm.