John Laughland, who has a doctorate in philosophy from the University of Oxford and who has taught at universities in Paris and Rome, is a historian and specialist in international affairs.
Get short URL 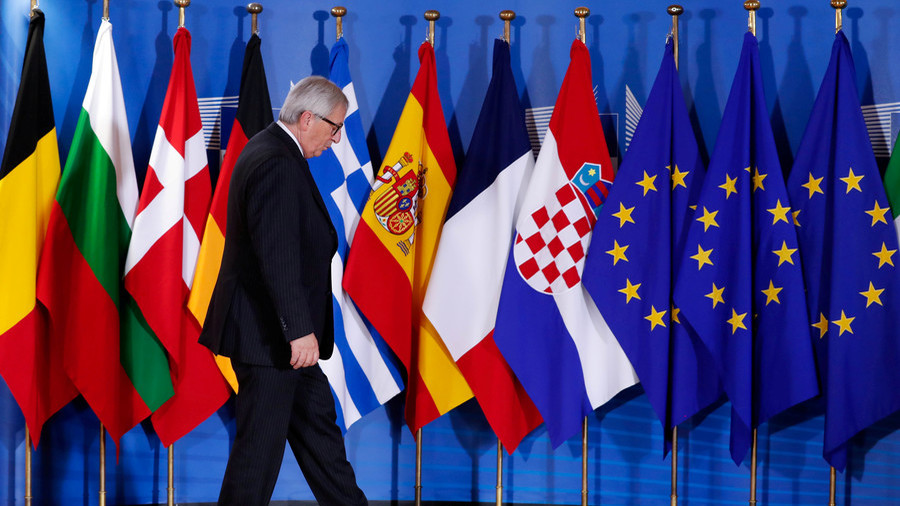 © Yves Herman / Reuters
The sight of European Commission President Jean-Claude Juncker stumbling at the NATO summit in Brussels last month, when he had to be held up by others, is a powerful symbol of the EU’s status on the world stage.

Donald Trump’s decision to activate sanctions against European companies that trade with Iran, and the EU’s response to it, demonstrate that the 28-nation bloc is little but a bumbling old fool in international politics.

There is no doubt that EU leaders are furious with Trump for ripping up their beloved Iran deal. Their fury is only aggravated by their inner knowledge that there is nothing they can do about it. French leaders like Emmanuel Macron and his finance minister, Bruno Le Maire, may bewail the fact that Europe is not “sovereign,” using the EU’s impotence in the face of US unilateralism as an argument for more European integration. However, this is the very policy that they have been pursuing for a quarter of a century, and which has brought them to the impasse in which they now find themselves. 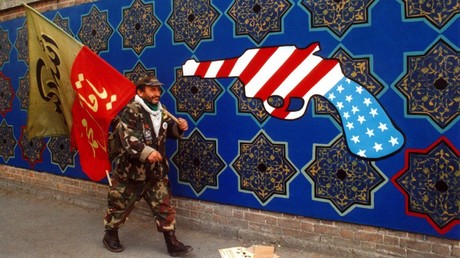 In response to the Iran sanctions, the EU announced that it was activating a “Blocking Statute,” a legislative measure which has hardly ever been used before because it does not work. Even the Brussels panjandrums admit that it is useless: one of them was quoted as saying, “It is a political signal given by the EU. It is not a miracle cure.” In other words, this statute will not protect European firms against US sanctions. Hundreds of them are already making for the exit from Iran if they have not already done so. Included among these are some of the biggest industries in the world, the French oil giant Total, and Airbus, whose contracts worth billions have just gone up in smoke thanks to the US president.

While EU institutions have been peddling the Democratic Party’s line that Russia is the cause of all “doubt” and “division” within the bloc, the fact is that Donald Trump has single-handedly blown the European dream apart. That dream was indeed always just that – a fantasy not based in reality. The illusion consisted of believing that European unity would make its composite states collectively stronger. The reality is the European integration was, from the very beginning, a US-backed project designed to help the West fight the Cold War. EU integration was and is ideologically and institutionally inseparable from NATO, which is dominated by the US. In other words, EU integration is impossible without US patronage and, as a result, if it is withdrawn, as it has been under Trump, EU leaders are like little schoolboys caught with their trousers down.

None of the benefits of a monetary union, which were heralded in Maastricht in 1991 and in the run-up to it, have been realized. It was said that the euro would favor growth, when in fact the US has hugely outperformed the eurozone since the single currency was introduced in 1999. It was said that it would protect Europe from external shocks, whereas the collapse in output was as great in Europe as a result of the financial crisis in 2008 as elsewhere. Above all, it was said that the euro would start to replace the dollar as an instrument of international commerce. Some 20 years later, and the dollar continues to be the almost unavoidable currency for trade, especially in oil.

It was precisely because BNP Paribas, like all banks, used dollars for contracts with Iran and other blacklisted states that it was hit with a gigantic $9 billion fine by the US in 2015. Europe did nothing about this gross overreach of US jurisdiction under nice Mr Obama then, even though this was exactly the same sort of measure as Trump has now announced: the BNP Paribas fine was handed down in the immediate aftermath of the Ukraine crisis, when the EU, as usual, had run to its American nanny to hide in her skirt. The same EU is now reaping its harvest of sorrow now under nasty Mr Trump. 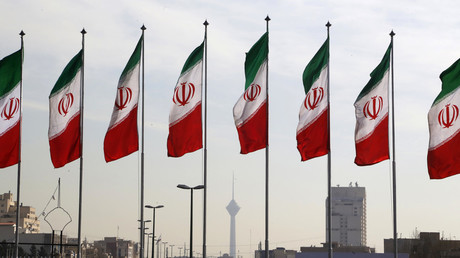 Ever since 2015, all European banks run a mile if you say you do business with a rogue state like Russia, or even more so Iran, and so companies simply do not have the ability to trade with those countries. It’s as simple as that. As Volker Treier, deputy head of the German Chamber of Commerce and Industry, has said: “Even the companies that aren’t affected by US sanctions, for example from the medical field or those who don’t have a business with the US, can’t find a bank that would process the transactions with Iran.”

The US has therefore seized control of the world economy by threatening to throttle the banking system. The existence of the euro has done nothing to stop this. For as long as the link persists between the dollar and oil, a link which is sustained by the massive military dominance the US wields in the world, this will not change. Militarily, European states outsource their defense to the US – so-called “European defense” is in fact assured by US-dominated NATO. As a result, the former great powers of world history like Britain, France and Germany are now pitifully reduced in military stature. When a nuclear power like France starts to boast about the fact  it can conduct a successful military operation in the wastelands of a failed state like Mali, then you know that Europe counts for nothing any more.

Trump’s aggression against Iran comes at a moment when Europe has been, once again, totally absent as a force in world politics in the Middle East. In 2011, France and Britain took the lead to work for regime change in Syria, becoming the first countries to break off diplomatic relations with Damascus. The EU set up one of the biggest packages of sanctions in history against that country. Its policy is now in tatters as Damascus regains control, with Russian and Iranian support, of the whole of Syrian territory. It is difficult to imagine a more flagrant example of a foreign policy failure than this one.  Even one of the most hardline Israeli figures, Foreign Minister Avigdor Liberman, now accepts that Bashar Assad has won the Syrian war and that he is now a possible interlocutor for Israel. Europe’s spectacular diplomatic failure is Russia’s spectacular diplomatic (and military) success, because Russia is now the lynchpin of peace between Israel and Iran.

Perhaps the greatest failure for the EU lies in the evident collapse of its ideology. Ever since its initial conception in the 1950s, the European construction has been based on the idea that it is possible to overcome power politics and to ascend to a higher form of international relations. This is much the same idea as that peddled by Soviet ideologues who claimed that the socialist bloc had advanced to a new form of international relations.

Putin’s Russia seemed to European leaders to represent a naked return to power politics: they disapproved of it but were happy to be able to rally around and draw some bogus cohesion from the common fight against the new bugbear.

By contrast, the decision by Trump to abandon multilateralism so spectacularly undermines the very basis on which they have operated for decades, because suddenly the US is no longer the great protector but instead an enemy. European politicians have been intellectually lobotomized by their own infantile post-modern ideology and they have long forgotten how to do real politics. Lulled into a false sense of security by thinking they never had to think, the EU’s boring and mediocre leaders are nothing but (very bad) managers; they are now totally lost at sea in a suddenly uncertain world. It serves them right.