Get short URL
A relative of Enas Khammash, who was killed with her toddler in an Israeli airstrike, inspects their bedroom August 9, 2018. / AFP
A pregnant woman and her 18-month-old child were among those killed in the latest Israeli airstrikes, Palestinian authorities said. The IDF launched the attack on alleged Hamas targets in Gaza after rockets were fired at Israel.

The fatalities were confirmed by the Palestinian Health Ministry on Thursday. It said that a total of three people were killed overnight in the airstrikes. Among the victims was a pregnant woman, identified as Enas Khammash, 23; and her 18-month-old daughter Bayan. They were killed in the Jafarawi area of central Gaza, AFP said, adding that the woman’s husband was injured.

Ruptly crew traveled to the Gaza Strip and visited the shelled house where Khammash and her family lived. Their footage captured a grim scene inside the damaged house, depicting debris and multiple bloodstains on doors and walls.

Ibraheam Abu-Amra, the house owner who rented the property to the family, told Ruptly that he was surprised that an attack had been carried out on a residential place and on unarmed people. Pointing at the debris, holes and blood on the walls, he stressed that nothing could justify the destruction.

The family’s neighbor told RT that he heard “a huge explosion” and then rushed onto the street. He saw “big huge smoke”coming from the Khammash’s house. When he entered the house, he said he saw the bodies. “We found the woman’s body shattered into pieces, her little daughter too,” he said, adding that the woman’s husband was injured in the leg, stomach, and head.

The Israel Defense Forces (IDF) said that since Wednesday they had “targeted over 150 terror targets” in the Gaza Strip in response to “approximately 180 rockets” being fired from the area. It added that the Iron Dome aerial defense system had intercepted over 30 launches, while the majority of projectiles had “landed in open area” – one of them outside the major southern Israeli city of Beersheba. 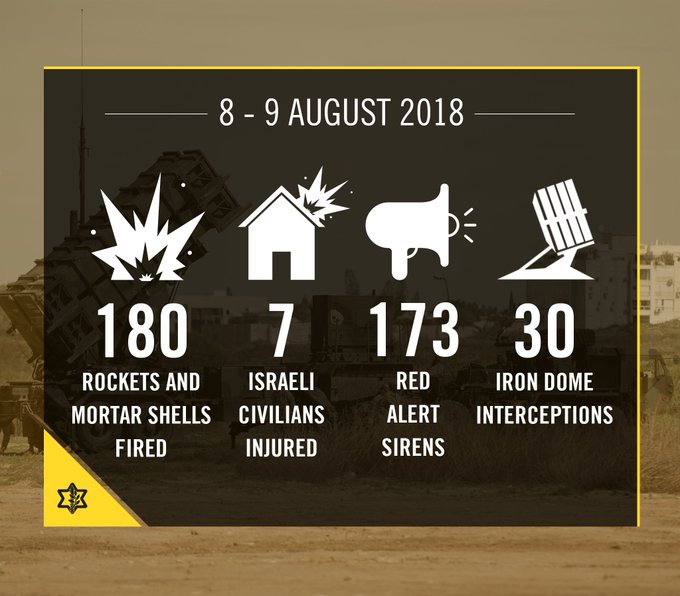 Approx. 180 rockets were launched from the Gaza Strip at Israel.

In response, the IDF targeted over 150 terror targets in the Gaza Strip

According to the IDF, Hamas “is responsible and bears the consequences for the ongoing events.”

The IDF, however, declined to comment on casualties on the Palestinian side.

The projectile launches come after an IDF tank struck a Hamas facility in Gaza on Tuesday in response to shots fired at soldiers from the Strip.

Moments ago, terrorists fired shots towards IDF soldiers near the northern Gaza Strip from a Hamas post. In response, an IDF tank targeted the post from which the shots were fired. No injuries to IDF troops were reported.

On Wednesday, an IDF tank again struck Hamas posts in Gaza after gunmen opened fire at a civilian vehicle involved in the construction of a barrier along the border. No injuries were reported as a result of the gunfire.

In the meantime, Hamas issued a statement saying that the group is “delivering on [its] promise.”

“The resistance accepted the responsibility to even the playing field with the enemy and it is succeeding in doing so,” it said in a statement.