One Thing We Could All Do is Call Congress For Glass-Steagall: Let These Banksters Fall in Their Own Shiite

We Refuse the Cyprus Bail-In and Bankster Stealing to Cover Their Gambling/Derivatives Debts!

As the world edges closer to the next crisis, today the man who has become legendary for his predictions on QE and historic moves in currencies, told King World News that the global reset will come like a thief in the night.

Where have all the dollars gone? Long time passing

Where have all the dollars gone? Long time ago

Where have all the dollars gone? Uncle Sam has spent them everyone

The Global Reset Is Coming

July 15 (King World News) – Egon von Greyerz:  “When Pete Seeger wrote the famous song “Where have all the flowers gone” back in 1955, little did he know that the total US debt, which was a few hundred billion dollars at the time, would, 63 years later, be almost $70 trillion.

But there is no reason why Seeger should have known. He was a singer-songwriter and his legacy will last a lot longer than Nixon’s, Greenspan’s, Bernanke’s, and all the other players that have contributed to this massive growth in credit and destruction of the dollar. While Seeger’s song – a work of art – is likely to be around for at least another 50-100 years or longer, all the opportunists that have destroyed the US economy, and thus the world economy, will soon be forgotten…

Listen to the greatest Egon von Greyerz audio interview ever

by CLICKING HERE OR ON THE IMAGE BELOW.

Egon von Greyerz continues:  “It is absolutely unreal how the world pays so much respect to mediocrity or even incompetence when it comes to running the financial system. Central banks and their heads have created this monster balloon which is now waiting to be popped. They have given the world the impression that they have been instrumental in saving the world economy. The central bank chiefs that managed to retire before the balloon burst can count themselves lucky. In my view, the luck is now in the process of running out for the present ones.

These chiefs believe so much in their own ability as saviors of the world that they don’t understand that all they are doing is creating a much bigger monster by printing and printing and printing. They are so arrogant that they can’t even call their actions by an honest name. What they are doing is sheer Money Printing or MP. But instead they call it QE or Quantitative Easing. What an absolutely ridiculous name that is designed to hide their own inadequacies as well as cheating the people. Nobody understands what QE means and that is, of course, deliberate. They simply confuse the people and mislead them into believing that their hocus pocus is actually some alchemistic formula that creates eternal prosperity.

These central bank heads are now so confident of their control of the situation that they are turning the QE to QT (Quantitative Tightening). That is, of course, utter and sheer arrogance. QE hasn’t worked. All it has done is to turn a fragile financial system into the biggest bubble in history. Even with zero or negative interest rates combined with massive MP, real GDP is not growing (measured with real inflation). Also, several dollars, euros or pounds of credit expansion are required in order to create just one dollar, euro, etc, of GDP growth.

Since QE, MP, or whatever you call it, hasn’t worked, why the hell does anyone think that QT will work? This is like taking away the punchbowl from a chronic alcoholic who will die from his drink or die due to lack of drink. And it is exactly the same for the global economy. It will collapse with more QE and and will collapse from QT. So QE / QT = TE (THE END).

“When will they ever learn, when will they ever learn” that you can’t create prosperity by printing money? And remember that money printing is not just what central banks do directly. Money printing also means credit expansion by banks, credit card, and finance companies, etc. All of these lend out 10-50 times the deposits or capital they receive. There is, of course, only one way to learn a lesson properly, which is the hard way. And the hard way in the case of the world economy is that the monster bubble pops. And like with many bubbles, this one only contains hot air. 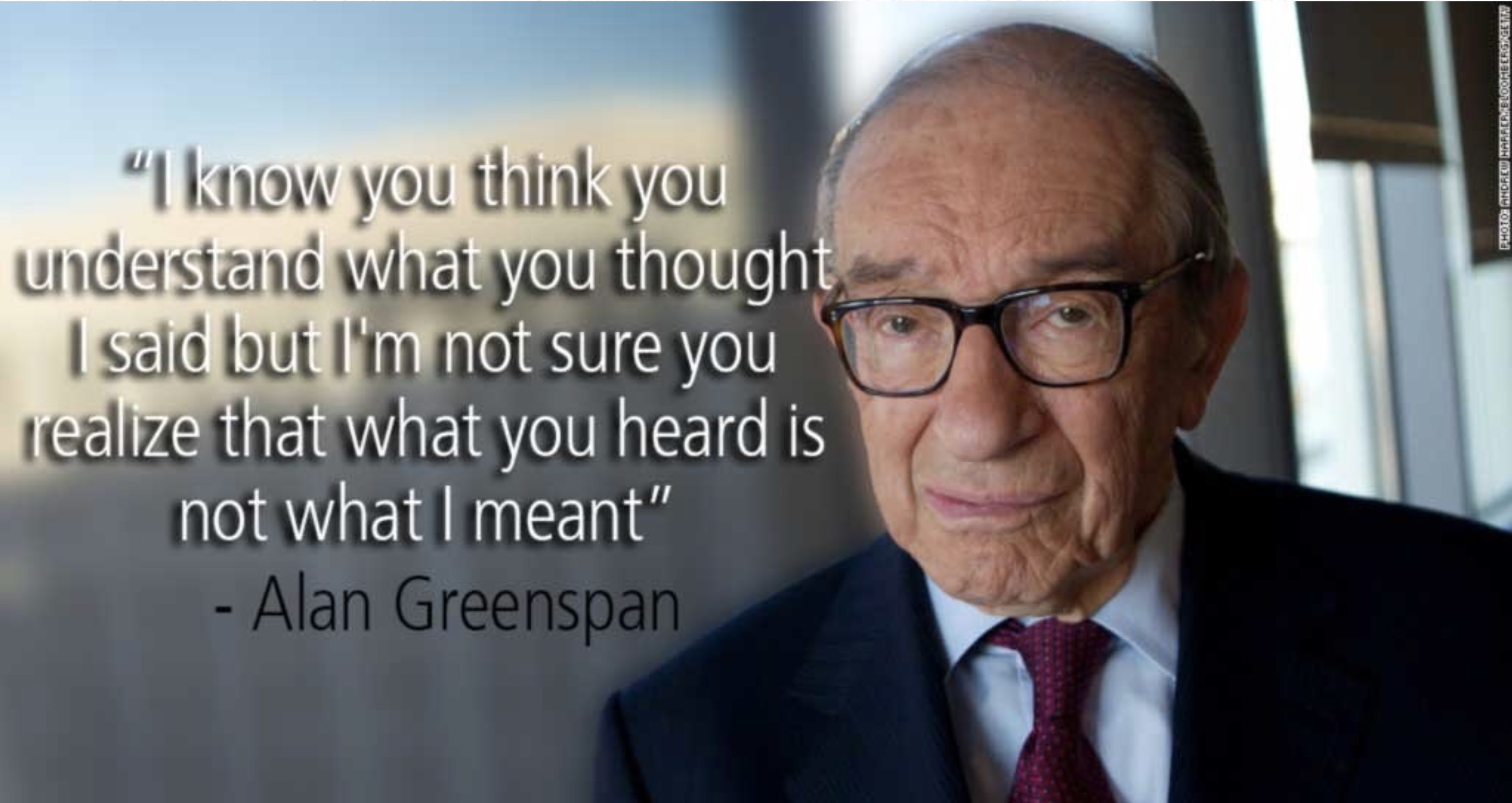 Thus, the $2.5 quadrillion monster bubble contains just empty promises that all disappear when the bubble is popped. These promises are not only words, but also $2.5 quadrillion of monetary promises or IOUs. To keep the bubble from deflating, central banks have had to constantly pump it up bigger and bigger. So more and more debt will fill the bubble together with inflated assets and even more empty words from bankers and politicians to make it all look plausible.

The debt explosion is not just a US disease. It is a US-led global phenomenon that has infiltrated most nations around with a central bank that can print money. Just look at the chart below illustrating how global debt has tripled since 1999 from $80 trillion to $240 trillion today. 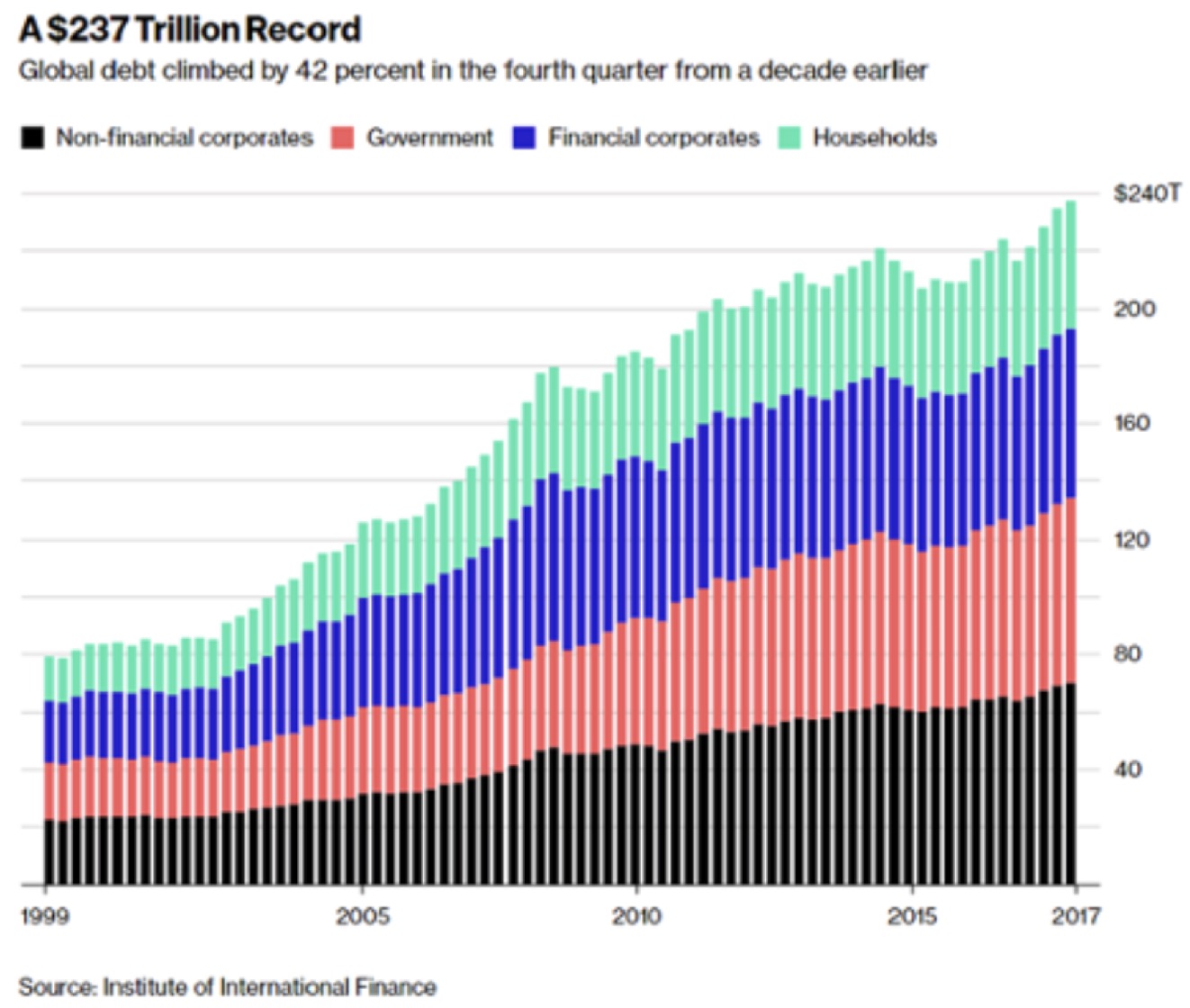 When the global debt and asset bubble pops, the world will find out that there was nothing inside. Of course, there are real assets and real wealth, but the problem is that when the bubble pops, all the debt will implode because no one can repay it, and with that, a lot of the assets will become worthless.

The only question is if stocks, bonds, property, and other assets, will go down by 75% or 95%. In my view, the biggest bubble in history will lead to the biggest collapse. There is no one that can save the world from the biggest financial calamity in history. MP (QE) will have zero effect except for causing temporary hyperinflation. A lot of assets will decline by 100%, such as money in the bank, bubble companies which are heavily leveraged – like Tesla – and many others. Even very valuable assets will be able to be purchased (in today’s money) for pennies on the dollar, euro or pound.

Paper money has always come and gone throughout history since no fiat currency has ever survived. For 5,000 years gold has represented stable purchasing power and the only money that has lasted for thousands of years. This is why countries that understand the importance of physical gold continue to accumulate, countries such as Russia, China and India. In the meantime, the rest of the world has invested less than 0.5% of world financial assets into physical gold.

Just look at China’s astonishing gold accumulation in the chart below. Another 140 tonnes was purchased in June, taking the total up to 16,000 tonnes with virtually all of it acquired since 2007. 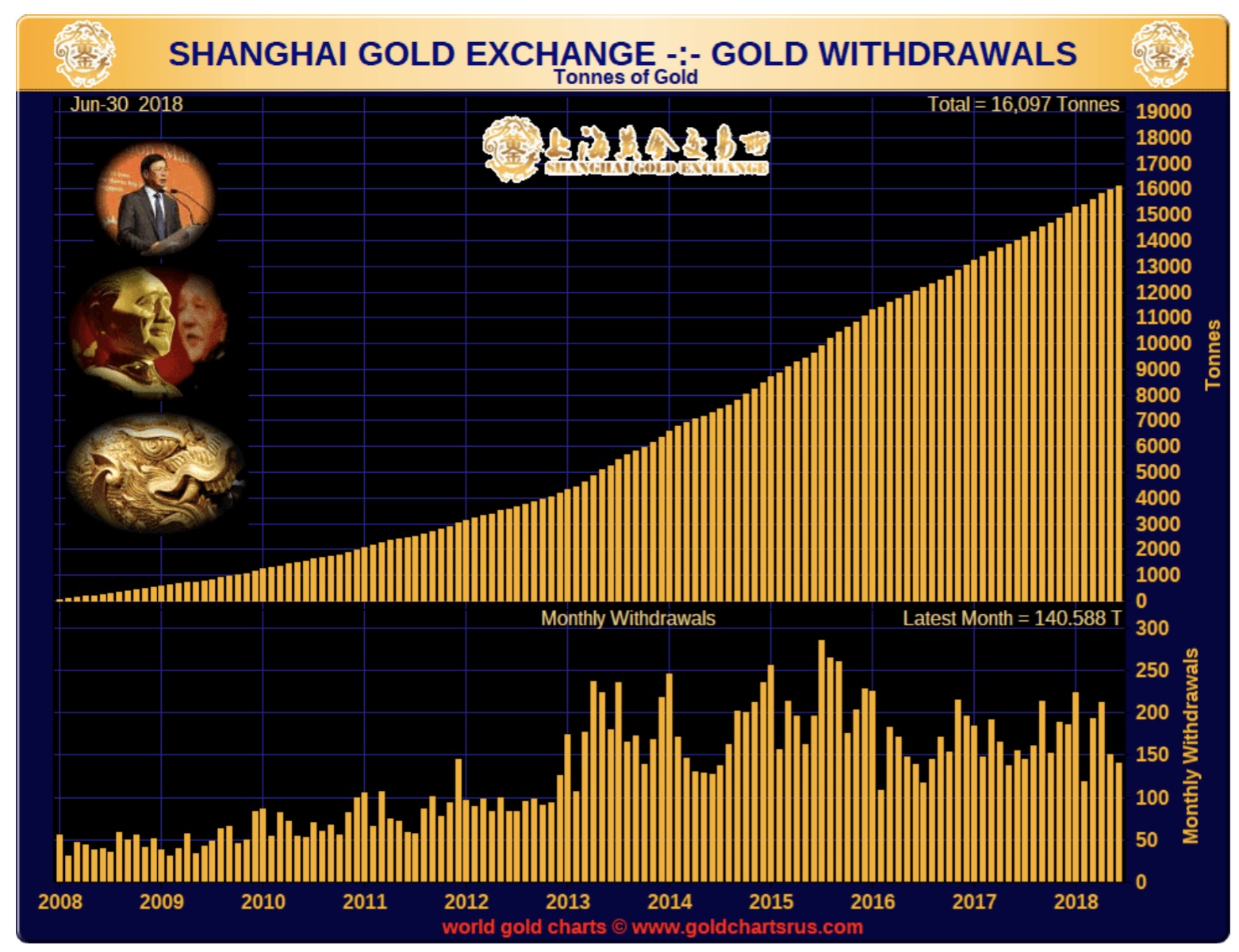 When the monster, ‘everything’ bubble pops, so will the paper markets in gold, silver, and other precious metals. The size of this market is at least 100-times bigger than the physical market. The rise of this market is very much linked to manipulation of the precious metals by central banks, the Bank for International Settlements (BIS), and bullion banks. When the paper metals markets pop, there will be no gold (or silver) offered at any price. This is the time when overnight or over a weekend the price will go from $1,250 to $10,000 or even $100,000. This might sound totally unreal to some, but this will be the most likely consequence of the monster bubble popping and everyone in markets running for the exit.

Most people believe that the status quo can go on forever and that central banks will continue their ridiculous game of pretending that air is real money that can create wealth. The few people who believe that there is a serious risk that the system will not survive in its present form, and that their assets — be it cash, bonds, or stocks — could decline substantially in value, must seriously consider insurance.

The next decline in financial markets is likely to start in late 2018 or early 2019. And this will not be an ordinary decline or normal correction. Instead, it will be the beginning of the biggest global bear market in history. And this time central banks and governments will fail in their attempts to save the system. They will, however, certainly print a lot of money and try to reduce interest rates. But as global bond markets collapse, rates will go up rapidly. This means that bonds and stocks will both crash along with most assets.

The only real insurance against what is coming is physical gold and some silver, obviously held outside the banking system. There is absolutely no argument against holding precious metals to protect against the risks in the financial system. The only question is, should you hold 10% of your financial assets in gold or more than 50% as some of our wealth preservation clients do? In my opinion, this is the time in history that you need to be fully protected. The reality is that each individual needs to decide for themselves what full protection means. Just remember that this time it will be costly to underinsure. Hopefully no one reading this will ask when it is too late: “When will we ever learn?” For those who would like to read more of Egon von Greyerz’s fantastic articles CLICK HERE.

***KWN has now released the powerful audio interview with James Turk and you can listen to it immediately by CLICKING HERE OR ON THE IMAGE BELOW. 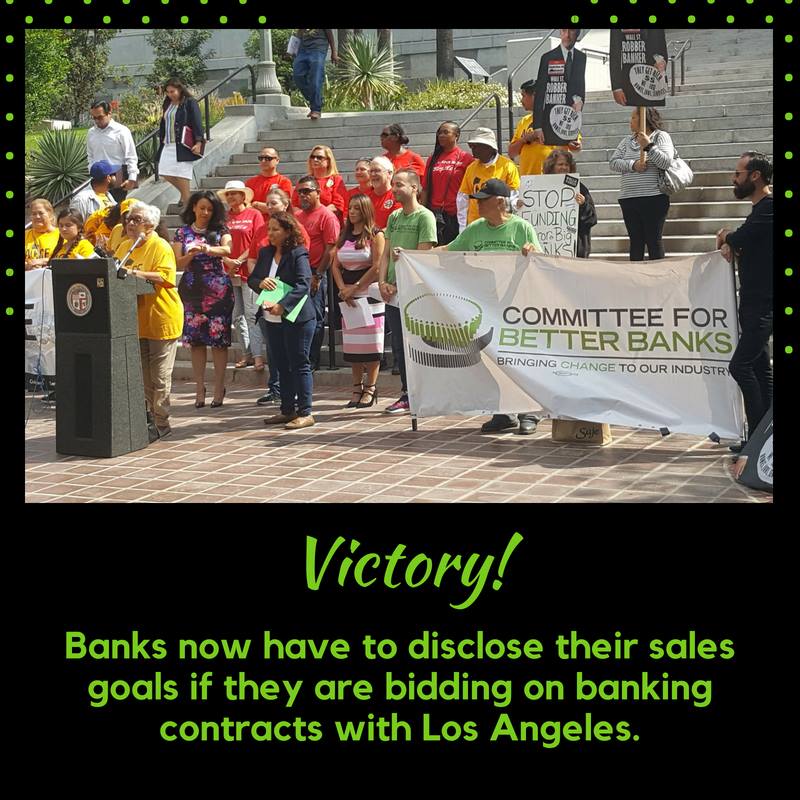 The rule follows years long efforts of the Committee for Better Banks, LA residents and consumer advocates who are holding banks accountable for their unethical behavior. The passage of this bill makes Los Angeles the first city in the nation to compel transparency from banks about their sales goal tactics and employee compensation.

Committee for Better Banks’ member Ruth Landaverde said it this way “We took power away from big banks and their army of lobbyists and gave it back to the people of Los Angeles. For too long, too many banks have gotten away with cheating customers and abusing workers with unethical sales goals and predatory practices.”

This is an enormous victory not only for LA, but the whole country! This effort just shows us how powerful we are when we stand together and fight for what is right. This will be the first of many cities to put this ordinance in place.