I am attaching an urgent message from LaRouche PAC on the dangerous and illegal attack on President Trump, and the parallel escalation of conflict between the US and Russia and Syria.
Please read the attached statement and call the White House (202) 456-1414   and the Capitol Switchboard (202) 224-3121 to tell your Congressman and Senators to stop the war drive before it is too late.
Thanks,
Marian Black (201) 286-1269

Friend, On Monday night, we began a national mobilization to prevent a new war in Syria, one which could, quickly, become a nuclear confrontation between the United States and Russia. You may already have heard about the mobilization, but if you haven’t we are now asking you to join it.

As the FBI was raiding the offices of President Trump’s attorney, Michael Cohen, we issued a national leaflet insisting that the British led coup against the President, the British Skripal nerve gas poisoning hoax, the Syria chemical weapons hoax, and Robert Mueller’s raid on Cohen, were all one orchestrated event. We said, “Enough,” the nation must be saved. “Call the Congress, Call your Senator, Raise the Roof –No War in Syria; Congress Must Now End Robert Mueller’s unconstitutional witch hunt. Tell the President, don’t step in a British trap.”

There was no Syrian government chemical weapons attack. It is propaganda from the White Helmets, a terrorist connected aid organization funded to the tune of millions by the British government and their American toadies. 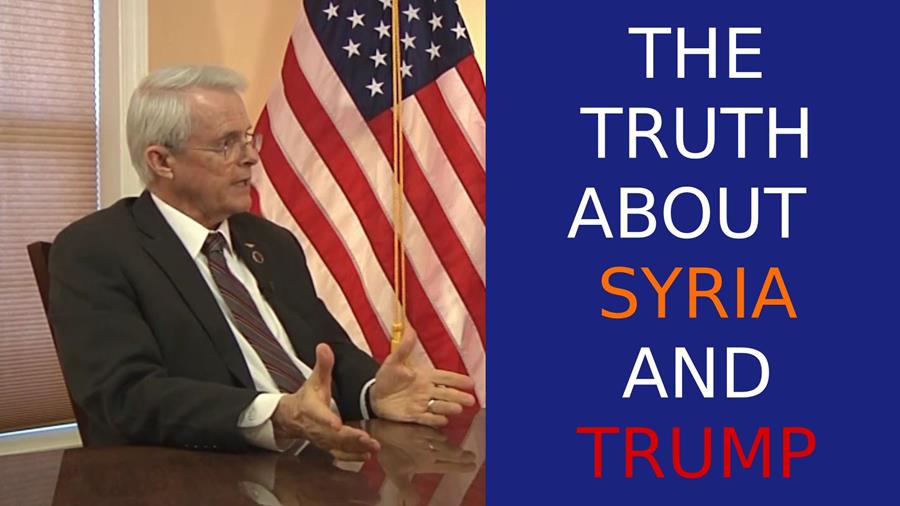 You can learn more about this by watching the video we just posted on the LaRouchePAC site featuring Virginia Senator Richard Black.

We are making progress. Whole sections of the President’s supporters, led by Tucker Carlson and others, are campaigning to stop war from breaking out over Syria. Reflecting the U.S. Neo-Con Chicken Hawks, the British, and the French, presently screaming in the president’s ear, however, he issued a blood curdling tweet early this morning, taunting the Russians. But then, he obviously thought about it, reflecting the message we are delivering—it is all one bogus British package. In a subsequent tweet he noted that there was no real reason for bad blood between Russia and the U.S. and then he said this: 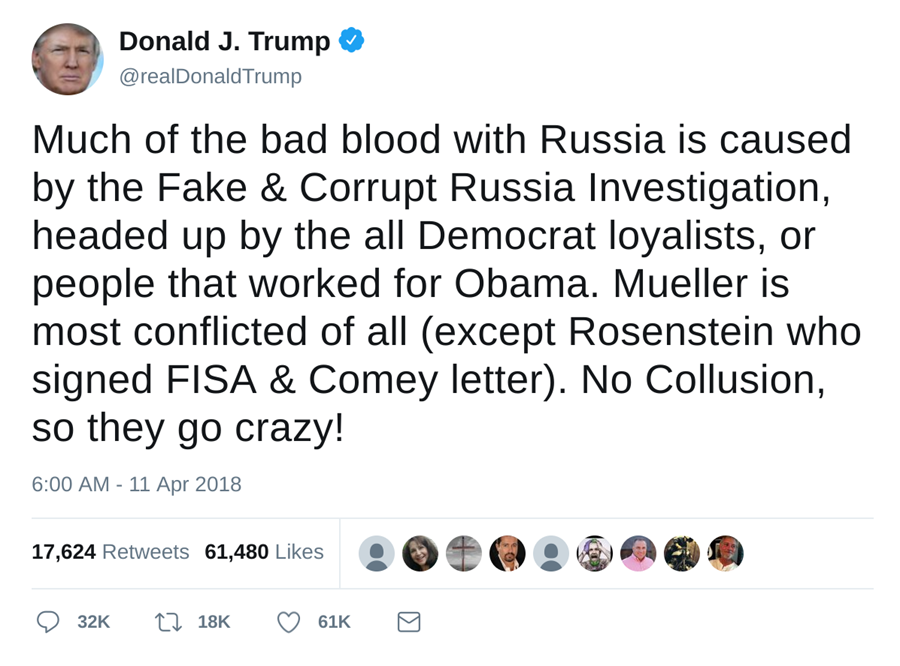 Devin Nunes and other Republicans in the Congress are now publicly talking about impeaching FBI Director Wray and Mueller’s handler, Rod Rosenstein. This is the sound constitutional approach which doesn’t play into Mueller’s trap for the President. But, other brain-dead Senators and Congressmen continue to play with both nuclear annihilation and the wanton destruction of our Constitution. They literally have no backbones or brains to shore up. Congress will only understand the pitchforks of an aroused population intent on survival.

So, tell Congressman again: No War in Syria, End Robert Mueller’s Witch Hunt, or We Will Vote You Out. Capitol Switchboard 202-224-3121. Tell the President, If You Want to Hold Someone Responsible, Expose the Lying British. White House Number 202-456-1111.

Join the mobilization and, please, contribute to help us spread this message to every nook and cranny of our country.

Thank you for your continued support. Together, we can win.
LaRouchePAC.com, Editorial Staff