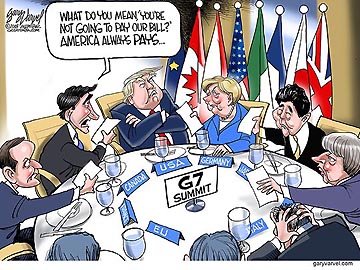 3 key foreign meetings, not just Singapore –Ponte/WND
“The June 12 meeting between President Donald Trump and North Korean Communist dictator Kim Jong-Un could be momentous, but so too could the seeds of two other June meetings. Days ago Kim fired several senior staffers, reducing his fear of a coup d’etat while he is away. If he does not move to eliminate his nuclear weapons, President Trump will likely respond by encouraging parity on the peninsula through South Korean nukes. Mr. Trump might also encourage Japan to flex its secret nukes and their accompanying space and weather rockets, which have long had the specs of ballistic missiles. Ever since the ‘Three Arrows Affair’ of the 1960s, it has been clear Japan would regard an attack on South Korea – whose city Busan/Pusan is only about 30 miles away from Nagasaki Prefecture’s Tsushima Island, scarcely farther than the distance from Catalina Island to the California mainland – as an attack on the Japanese homeland….But while media’s eyes turn to Asia, the Bilderberg gathering has been underway in Italy’s Turin, shrouded in mystery….President Trump is fighting to defeat globalist Progressivism. In the G-7 and Bilderberg meetings, he faces private and public enemies of Great American nationalism. Keep your eye not only on Singapore, but on all three meetings.” Full story