Klayman: Rosenstein Must Be Removed Immediately

Klayman: Rosenstein Must Be Removed Immediately!
Go to www.FreedomWatchUSA.org to Sign Petition to Remove Mueller. Also Share and Donate 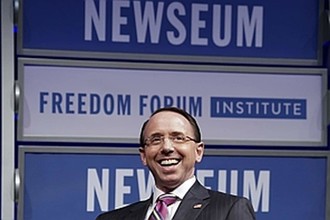 ‘The Department of Justice is not going to be extorted’: Rosenstein responds to impeachment threat
By Matt Zapotosky
Washington Post
May 2, 2018

Deputy Attorney General Rod J. Rosenstein took aim Tuesday at Republican lawmakers who have drafted articles of impeachment against him, saying that he would not comment on documents “that nobody has the courage to put their name on” and asserting that he will not change his behavior in the face of threats.

“I think they should understand by now that the Department of Justice is not going to be extorted,” Rosenstein said. “We’re going to do what’s required by the rule of law, and any kind of threats that anybody makes are not going to affect the way we do our job.”

Continue Reading…..
Support Our Cause and Join Our Fight!
Go to https://www.freedomwatchusa.org/donate
Or call 844 FW ETHIC to contribute to Freedom Watch now
Your help is urgently needed!
More on Rosenstein:

Feb 06, 2018 · Rod Rosenstein is a Zionist Traitor [W:78] This is a political forum that is non-biased/non-partisan and treats every persons position on topics equally. This …

My Comment:  He SHOULD BE IMPEACHED!  HE IS TRYING TO OVERTHROW A LEGITIMATELY ELECTED PRESIDENT WITH LIES.  THIS IS PERJURY, MALFEASANCE, SEDITION AND TREASON.

THAT is the $64,000 question. That is the dilemma for all dual citizens holding high office–which country do you stand by and defend? Which of your dual countries do you betray?

If I’m not mistaken, Israel currently has a “Nationality Law” (aka Loyalty Law) that prohibits individuals with dual citizenship from being Knesset members. In order to have Israeli citizenship one has to swear to be loyal to Israel first.

Since the 40 members of the US Senate & and House(1) now have Israeli citizenship, they have sworn to be loyal to Israel first.
Unfortunately, not only US Senators & Congressmen are policy makers whose first loyalty it to Israel.(2)

Because so many of America’s politicians & policy makers are Zionist “Israel Firsters” I think that it is unlikely that we will see any essentially necessary initiative to
expel these ethically compromised individuals from office to make way for policy makers whose loyalty is to America’s best interest first.